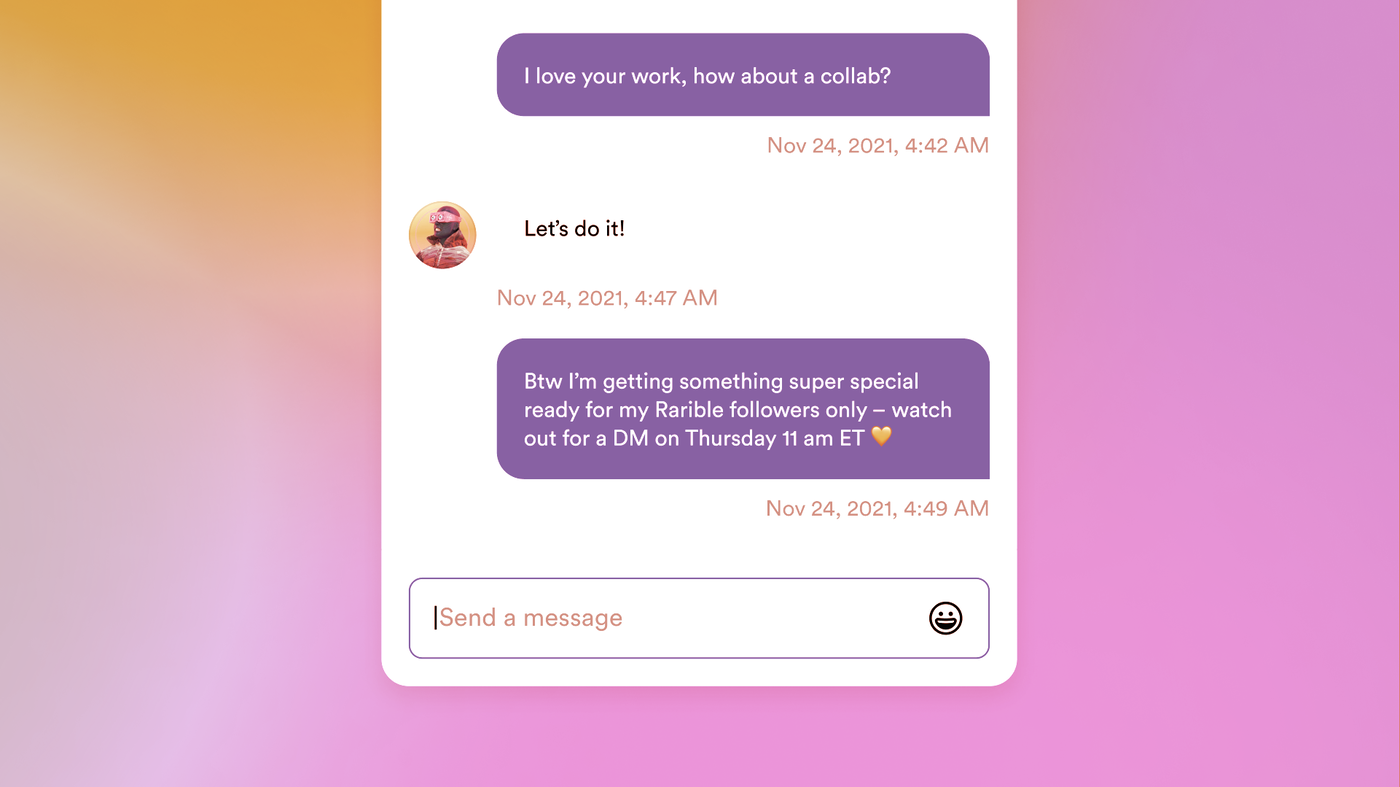 Amid growing demand for NFTs, including nearly $10.7 billion worth of trading volume in Q3, the marketplaces that sell such tokenized digital collectibles are shifting and evolving to try and win more market share. Today, Rarible revealed that it’s making a social play, launching messaging functionality on its marketplace.

Rarible Messenger is a new feature on the NFT marketplace, allowing prospective buyers and sellers to communicate about transactions, shared interests, and more. Rather than forcing users to look elsewhere to communicate—whether it’s social media, Discord, or email—Rarible is putting that functionality right on the site.

It’s a first for NFT marketplaces, although Rarible is unlikely to be the only player making such a move. Coinbase, for example, has announced plans for its upcoming NFT marketplace to have a social layer. However, Coinbase’s approach sounds more like a Facebook-esque activity feed, while Rarible is targeting direct communication with its effort.

The tool is available now via Rarible’s marketplace, the company announced, with plans to eventually launch Rarible Messenger as a standalone Web 3 communication tool. It’s based on users’ Ethereum wallet addresses, and includes privacy features so users can block others if needed.

An NFT acts like a receipt for a rare digital item as verified by a blockchain platform, and an NFT can represent anything from a profile picture to a digital illustration, video file, or even an interactive video game item. Ethereum is currently the leading platform for NFTs.

Rarible is an open peer-to-peer NFT marketplace, but it currently processes much less total transaction volume than chief rival OpenSea. While Rarible’s monthly trading volume has landed around the $20 million mark the last three months (per Dune Analytics), OpenSea has averaged $3 billion per month over the same span.

Unlike OpenSea, however, Rarible takes a community-owned approach thanks to its RARI governance token, which launched in 2020. The token, which is awarded to buyers and sellers on the platform, lets holders vote in decisions around the site’s future.

Major players are creating their own NFT markets, with FTX US recently launching one and Coinbase readying its own platform by year’s end. Rarible isn’t the only long-standing NFT platform to make significant changes lately: the Gemini-owned Nifty Gateway recently shifted from a curated, artwork-centric approach to become an open aggregator of NFT marketplaces.