The Ledger Nano X features Bluetooth, an OLED screen and support for over 1,000 crypto assets. But is it worth buying? 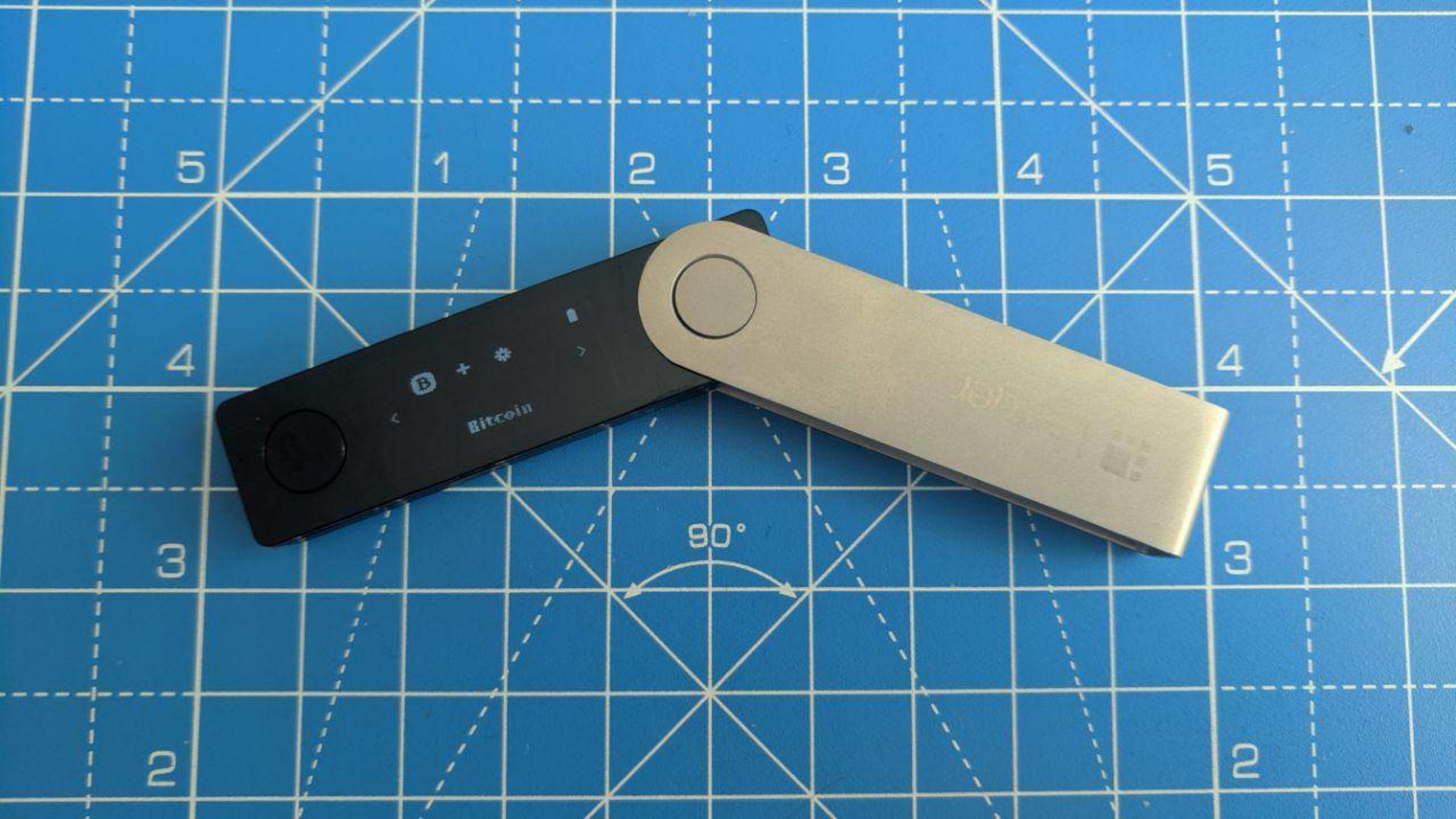 The Ledger Nano X gets Bluetooth and a bigger screen (Image: Decrypt)

Since cryptocurrencies were invented over a decade ago, there have been many attempts to build more advanced, secure and user-friendly walletsto store them.

As of 2020, the current gold-standard for security is known as a hardware wallet—a physical device that stores your cryptocurrency private keys in a secure offline environment. One of the most prominent companies involved in moving the needle forward is Ledger, the firm behind the popular, but flawed Ledger Nano S hardware wallet.

Now, the company has iterated on the formula used with its previous wallets to produce its next-generation hardware wallet, known as the Ledger Nano X. Does Ledger's latest flagship device live up to the hype? Let's find out.

One reason for the Nano X's greater bulk is that it now has a built-in 100mAH battery, meaning that you can use it on the move—unlike its predecessor, which had to be plugged into a PC using a USB cable to draw power. Also filling out its frame are increased memory and a larger OLED screen.

As we can see, although the Ledger Nano X is far smaller than the KeepKey wallet and the Ledger Blue, it is noticeably larger than the Nano S and Trezor Model One. Nonetheless, it is still an incredibly small device, and is roughly comparable in size to a common USB pen drive.

Overall, the Ledger Nano X has a modern aesthetic that is similar to the Ledger Nano S, albeit more streamlined, since the buttons are now built into the body of the device and sit flush with the casing.

The Ledger Nano X may be hefty, but it's comparable to other wallets (Image: Decrypt)

The Ledger Nano X comes supplied in a small cellophane-wrapped box, measuring approximately 80mm x 131mm x 31mm. Inside, you will find the Ledger Nano X device, in addition to a braided USB A to USB C cable and a keychain strap. Documentation includes a getting started leaflet, three recovery sheets (for recording recovery phrases) as well as several stickers featuring Ledger branding.

The Ledger Nano X's large screen and controls make it easier to use (Image: Decrypt)

The Nano X may be heftier than the Nano S, but it's still a small device. As a result, navigating through the on-device menu isn't exactly the simplest process in the world—particularly when considering the fact that it only has two buttons. However, it is certainly an improved, less fiddly experience compared to the Ledger Nano S thanks to the significantly larger screen and controls.

Navigating the device's menu involves scrolling left or right using the left and right button respectively, or selecting options by pressing both buttons simultaneously. Beyond this, most of the action actually occurs on the associated Ledger Live application, with the Ledger device itself being mostly used for verifying addresses and authorizing transactions.

The Ledger Nano X's larger screen resolves one of the most common gripes about the Nano S, since addresses can now be displayed in their entirety instead of having to scroll. One niggling issue is that the Nano X ships with a relatively short USB cable—just 50cm long, which can make it difficult to use if your computer isn't in a convenient location.

To get started, you'll need to use the Ledger Live app (Image: Ledger)

Once Ledger Live is up and running, you can power up the Ledger Nano X device by holding the left button, after which you'll be able to navigate through the startup screens to configure the device. This will involve choosing a 4 to 8 digit PIN code, and backing up and verifying the randomly generated 24-word recovery phrase shown on the device. Overall, this process takes around 5 to 10 minutes, and only needs to be completed once.

By default, the device doesn't ship with any preinstalled wallet apps. Instead, these need to be manually downloaded by connecting the Ledger Nano X with Ledger Live. Thanks to its Bluetooth capabilities, the Ledger Nano X is able to pair with mobile devices running Ledger Live wirelessly; if you're using the device with a desktop PC, you'll have to use the supplied USB cable.

The Ledger Nano X can store up to 100 apps simultaneously (Image: Decrypt)

The Ledger Nano X also overcomes one of the major limitations of its Ledger Nano S, by bumping the available internal memory from 320kb up to 2048kb. This allows users to store up to 100 apps on their device at once—considerably more than the 3 to 7 simultaneous apps the Ledger Nano S could hold. This means the Ledger Nano X can currently hold the entire app library simultaneously—avoiding the need to manually remove and switch out apps due to memory constraints.

While the vast majority of these apps allow the wallet to hold additional cryptocurrencies and tokens, a handful impart additional functionality to the Ledger Nano X. For example, the FIDO U2F app turns the Ledger Nano X into a two-factor authentication key, whereas the recovery check app can be used to ensure you have correctly saved your recovery phrase.

Moreover, the Ledger Nano X is the first cryptocurrency hardware wallet to include a built-in 100mAH battery, a necessary upgrade since the device now features Bluetooth connectivity out of the box. This allows the device to connect to mobile devices wirelessly, whereas the older Ledger Nano S could only connect to mobile devices using a Ledger OTG Kit.

With the addition of wireless connectivity, increased memory, and a much larger screen, Ledger has clearly paid attention to the shortcomings of its earlier products and is trying to make safely storing crypto assets a less challenging task.

The Ledger Nano X is compatible with well over 1,000 digital assets, including 23 coins and all ERC-20 tokens. Many of these can be managed through Ledger Live, whereas some require the Ledger Nano X to be used in conjunction with a compatible wallet. Supported crypto assets include;

The Ledger Nano X supports practically every crypto asset supported by the Ledger Nano S—barring Zilliqa (ZIL)—but is able to hold more of the relevant wallet apps at any one time thanks to its expanded internal memory.

As such, the Ledger Nano X is ideal for securing diverse portfolios, though individuals looking to store newly released crypto assets may need to wait until Ledger adds support for them.

As a hardware wallet, the Ledger Nano X targets the minority of cryptocurrency users that value security above all else. As such, the team behind the product has clearly put a great deal of thought into the potential ways such a device could be attacked, and have incorporated a huge number of potential safeguards into its design.

Like all Ledger devices, the Nano X features state-of-the-art security and incorporates a physically isolated security element certified as CC EAL5+. These security elements are similar to those used to secure credit and debit cards, and are the standard used by banks for the protection of financial information.

The device also features a dual-core MCU which runs a proprietary operating system known as BOLOS and controls communication between the connected device and the Ledger secure element. Although the addition of Bluetooth theoretically increases the number of potential entry points hackers could use to compromise the device, the Ledger Nano X encrypts Bluetooth traffic between the mobile device and requires manual verification for all important device actions.

Beyond this, Ledger's Nano X and Nano S are the only hardware wallets to receive CSPN (First Level Security Certificate) certification, which means their security has been independently certified by ANSSI—the National Cybersecurity Agency of France.

These hardware-based security measures are also supplemented with several software-based ones, including a 4-8 digital security PIN, automatic inactivity lockouts and an optional Ledger Live password lock.

Overall, the Ledger Nano X is without question one of the most secure cold storage solutions on the market.

The Ledger Nano X is currently available for purchase from the official Ledger website for $119. With that said, it can often be found for cheaper at authorized third-party retailers as well as official resellers on Amazon. You should exercise caution when purchasing any hardware wallet, making sure to only purchase from authorized sources, and never using any hardware wallet that has already been configured.

At twice the price of the Ledger Nano S, the Nano X is one of the more expensive hardware wallets on the market. If portability and usability are your top concerns, it's probably worth the hit on your wallet—but if you're already happy with the Ledger Nano S, there's little reason to upgrade.

The addition of Bluetooth and massively expanded internal memory are steps in the right direction, whereas the huge range of supported cryptocurrencies means that even the most diverse cryptocurrency investors can secure their entire portfolio.

The Ledger Nano X  is an excellent product marred only by its high price tag; those in the market for a less expensive alternative may want to take a look at the cheaper, but dated Ledger Nano S.