What are dual token sales?

Dual token sales are when a project creates two tokens, one as a security to raise funds, the other as a utility to serve the network. The idea is to help projects become more compliant with regulators.

When the crypto market exploded in 2017, speculation ran rampant–and token sales were a key driver. New tokens could suddenly explode in value and everyone wanted in on the action–a classic bubble. As the market came crashing down, the lottery ticket that was the Initial Coin Offering (ICO) evolved into a plethora of new token sale models.

As the U.S. Securities and Exchange Commission was issuing not-so-subtle warnings and shutting down crypto projects, the industry was reacting. To deal with impending regulations and legal action, new token sale models were being experimented with such as Simple Agreement for Future Tokens (SAFTs), Security Token Offerings (STOs), and Consumer Token Offerings (CTOs)–to name a few. The dual token sale was a new method startups were hoping could raise money while avoiding the wrath of regulators. In this article, we find out if two tokens are better than one.

What are dual token sales?

Tokens and–crypto assets in general–tend to blur the lines between traditional securities like stocks, currencies, and commodities. Like any new technology, neatly defining them using the old framework is nearly impossible. Dual token sales deal with the uncertainty by separating utility tokens from security tokens. A dual token sale will have one token specifically designated as a security or investment with access available only to accredited investors. This security token can then be used to raise money for a blockchian project while still following regulations for traditional securities like stocks or bonds.

The other token in a dual token sale is normally a utility token–a token used in the network or platform. This second token isn’t used for raising money, but instead fulfills another role depending on how the platform is designed.

For most of crypto’s existence, the SEC has been vague about how it classifies tokens and crypto assets. In April 2019, they gave their clearest guidance on token sales yet–the “Framework for ‘Investment Contract’ Analysis of Digital Assets”. The framework finally gave blockchain projects some path to not breaking the law.

The main points of whether a token is a security are:

With dual token sales, companies could satisfy the SEC’s requirements by raising money with a security token, offering a utility token that could be used right away, and becoming decentralized later. In theory, a dual token model allows projects to stay out of trouble.

Besides regulation, dual tokens allow projects more customization in their token economies. Two tokens allow for different properties, multiple incentive structures, and more options for users. By adding smart contracts and dapps to the equation, the tokenomics of a dual token system could become even more complex. In some instances, the reason for having two tokens has nothing to do with regulators or token sales, but is essential to how the system functions.

What are some dual token examples?

MakerDAO’s use of MKR and DAI is probably the most well-known example of a dual token system. The sale of the MKR token occurred relatively quietly and early compared to other token sales during the crypto boom of 2017, but the token was essential to the system’s design.

MakerDAO used MKR as a governance token and price stability mechanism for the DAI stablecoin. If DAI stays at one USD, MKR tokens are destroyed and holders of MKR benefit from a smaller MKR supply. If DAI fluctuates too far from the one dollar mark, MKR tokens are created – and holders of MKR have to deal with an increase in MKR supply. MKR holders can also vote on changes in the platform such as the introduction of new collateral types.

Anchor also uses two tokens to create a stablecoin. The value of their stable token is pegged to the “Monetary Measurement Unit (MMU)”, which acts as a stable financial index reflecting long term global economic growth. Unlike DAI, which uses the US Dollar as their peg, Anchor uses the MMU as their peg.

Filmio, a platform for funding media projects, also has two tokens. FILM tokens are the security tokens only available to accredited investors. Holders of FILM are entitled to the income from different Filmio projects in a similar way owning stock in certain companies pays dividends.

FAN tokens are the utility tokens used as rewards for participating in the network. These utility tokens can be used to vote on projects and interact with other users in the Filmio ecosystem.

With so many different ways to sell a token, will the dual token sale catch on?

So far, no dual token sales have been shut down by the SEC and MakerDAO shows a real use case for a dual token system beyond only dealing with regulations. Maybe two tokens really are better than one. 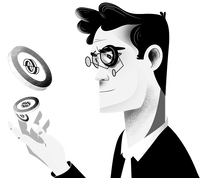