MakerDAO: What went wrong and how it was fixed

MakerDAO's response to Black Thursday was to add another stablecoin to its mix, which worked, But is it truly decentralized? The DeFi Guy digs in.

Inside the MakerDAO meltdown

Last week’s sell-off was brutal for everyone in crypto. While the fall in the price of Bitcoin, Ether and pretty much every other cryptocurrency brought a world of pain to holders, stablecoins become a refuge of sorts. MakerDAO’s soft-pegged stablecoin (meaning it targets, but doesn’t promise a 1:1 exchange rate with USD), took things to extremes, moving up to $1.10 and beyond as the price of ETH dropped precipitously.

Some might construe the news that DAI, which is ultimately backed by Ether, which was falling at the time, became worth more than it was designed to be worth was a good sign. But these people clearly didn’t bother to look behind the scenes at the carnage happening in the background. Which ultimately led to the decentralized project having to call in the cavalry of a centralized stablecoin, USDC, to help bail it out.

I was curious to turn some USDC into DAI to see what would happen. But first let’s look at what caused the mess.

MakerDAO: So what happened

Last Thursday afternoon (GMT), as the Ethereum network was struggling to cope with demand, and prices were nearing their lows, MakerDAO’s immunity system tried to kick itself into action.

We’ve recently looked at how MakerDAO works. It allows anyone with Ether and/or Basic Attention Token (BAT) to become a virtual pawnshop, by placing $150 as collateral on the block for every $100 they borrow from themselves.

When all is well, these borrowers pay back what they owe, plus interest, and can withdraw their collateral. The notion that there is more value underlying the loan, gives people receiving DAI the comfort needed to pay about $1 for these tokens.

On a good day, everything works smoothly. Last week however, one key part of that equation changed, in a big way: With the price of ETH falling by half in a short span of time, many borrowers found that they no longer had a full $150 in collateral for every $100 of DAI.

When this happens, MakerDAO has a function which effectively allows anyone prepared to do so, to step in and buy the ETH or BAT collateral, and close the loan, with any remaining value returned to the original borrower. Usually this results in the original borrower losing the value of their loan ($100), plus a liquidation penalty (13%), and ending up with something like 37% of the value of their loan (or ~25% of their original collateral).

So, why would some step in to perform the liquidation function? Excellent question!  Of that 13% liquidation penalty, some is allocated to the liquidator, known as “keepers.” The keepers effectively participate in an auction to buy the ETH held as collateral as a discount to the market price. That often works out to be a minimum 3% discount.

However, last week was different.

Given the market conditions, and extremely elevated gas prices due to the congestion in the Ethereum network, many of these keepers weren’t participating in the auctions. This allowed a single clever keeper to buy this collateral at the low, low price of $0.

The knock-on effect was that anyone with an under-collateralized vault didn’t receive anywhere near 25% of their original collateral, they received nothing. Nada. Нет.

The result of these actions resulted in those losses flowing over to the MakerDAO as a whole, leading to more than $4.5 million missing from the system.

As people scrambled to close their loans to stop the bleeding, they were met with DAI holders who had little interest in parting with their stablecoins. In part because of the uncertainty of crypto prices but also because of failed auctions, new DAI loans weren’t being taken out, which would have provided enough liquidity to drop the DAI price closer to $1.

Stopping the bleeding with another stablecoin

A few days later, on Monday 16 March, the MakerDAO team had responded, proposing to allow for a new form of collateral from which to issue DAI denominated loans: USDC.

What is USDC? Why USD Coin of course, a stablecoin backed by dollars held in a bank account, and supported by several large cryptocurrency companies, including Coinbase and Circle. As it has fairly robust controls, and actually is redeemable for USD in a bank account, the price tends to stay pretty close to $1 on the open market. That’s the good news:  USDC will likely remain worth $1, unless the underlying funds have an issue, and people can place them in MakerDAO and create DAI.

The downside? It’s kind of hard to stretch your definition of “DeFi” to include literal banks backing a token as “decentralized,” though some are apparently good at mental gymnastics apparently. But it’s not just skeptics like me—even several of the hardened DeFi faithfuls see this as running counter to the revolution.

Still, never one to miss out on a new thing, I wanted to create some DAI from USDC. Let’s take a look at how it works.

If you were following along for our first review of how to setup a MakerDAO Vault, you’ll recognize that this is the same thing, but with a new collateral type. Luckily I still had nearly $20 worth of USDC floating around.

What’s immediately different though, from ETH and BAT Vaults, is a lower liquidation rate (USDC would have to fall to about $0.80 before liquidation could take place), and stability fee is a whopping 20% APR. All this suggests that they really want this to be a short-term solution to stabilize the situation, then they’d kindly like you to get your USDC out of there. Who knows though, maybe they’ll change their minds later.

But as I noted when I first covered MakerDAO, there is a minimum 20 DAI creation, which means I need more USDC. I head over to Uniswap to stock up.

I let that confirm, and headed back to Oasis with about $42 of USDC.

I’ve not used this wallet on Oasis before, so I’ll need to do several transactions to get MakerDAO and my vault setup. 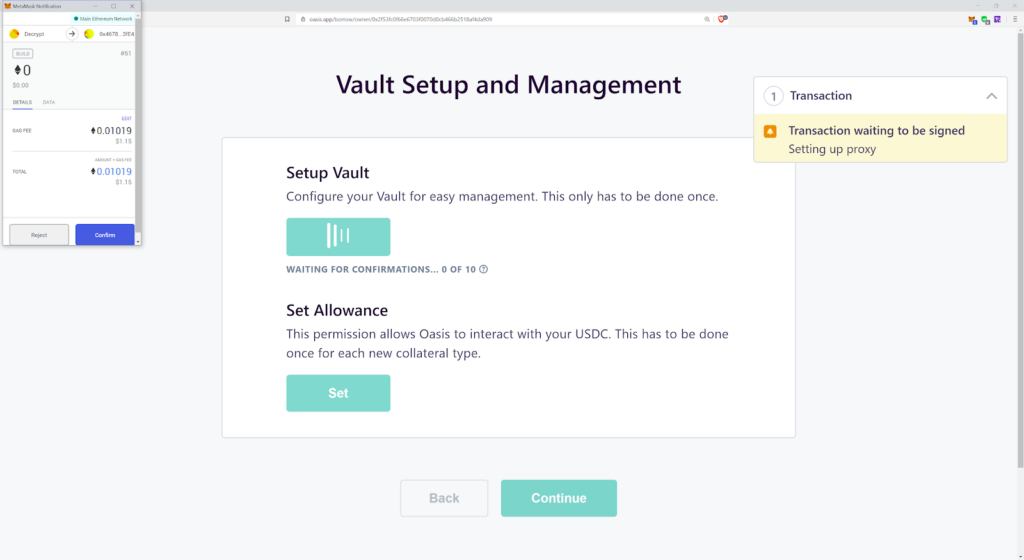 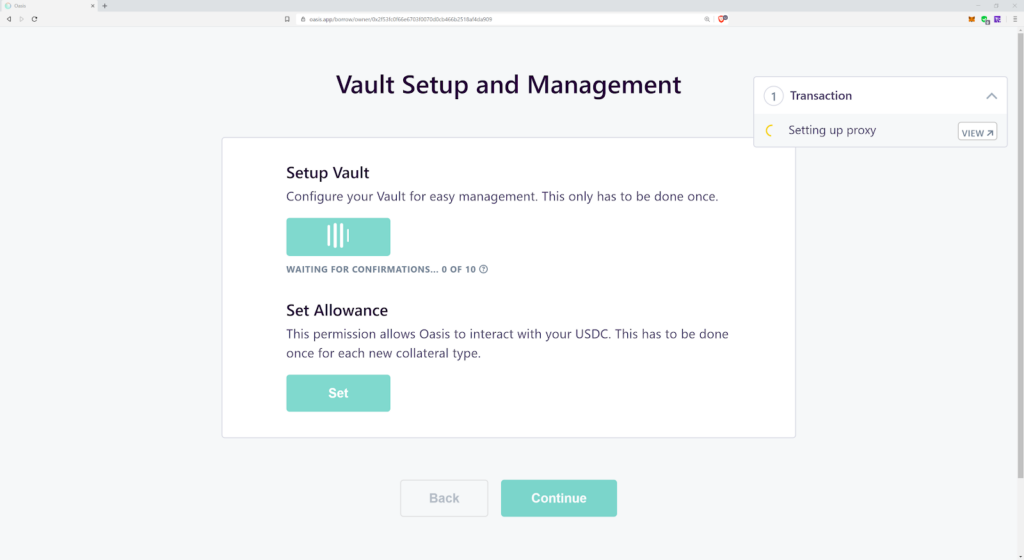 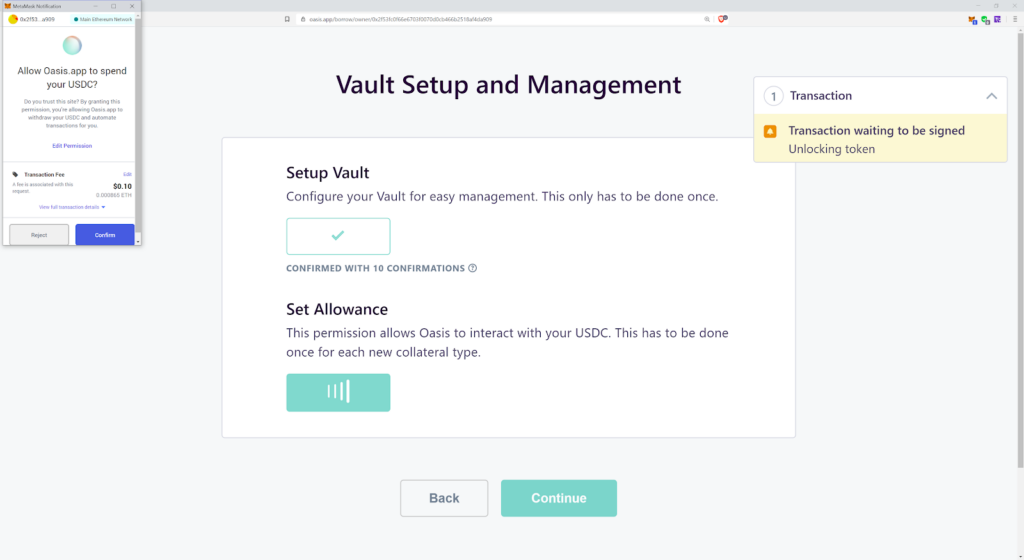 You’d think they could automate this into one big thing, but what do I know?  Anyway, with setup done, I can finally turn my actually stable-coin into a smaller number of less stable-coins. 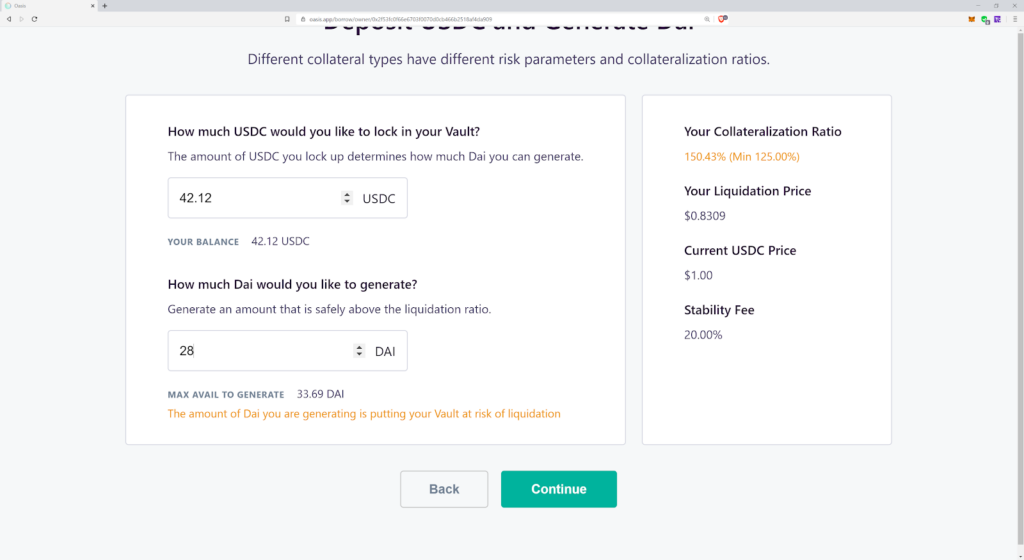 I then have to agree to more Terms and Services with the “decentralized” system. And I get to see that famous 13% liquidity penalty, which turned out to be 100% for a number of people, as we discussed before. I send yet another transaction on Ethereum, and we’re off. 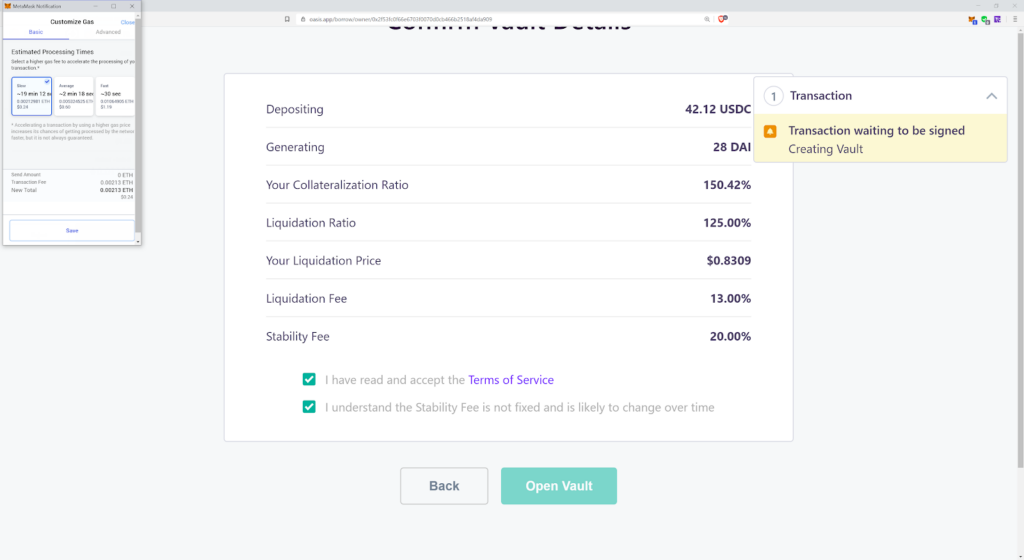 Several minutes later, because I opted for the slow gas fee (we’ll I’m confined in my home for at least two weeks, so I’ve got time), and we’re good to go. 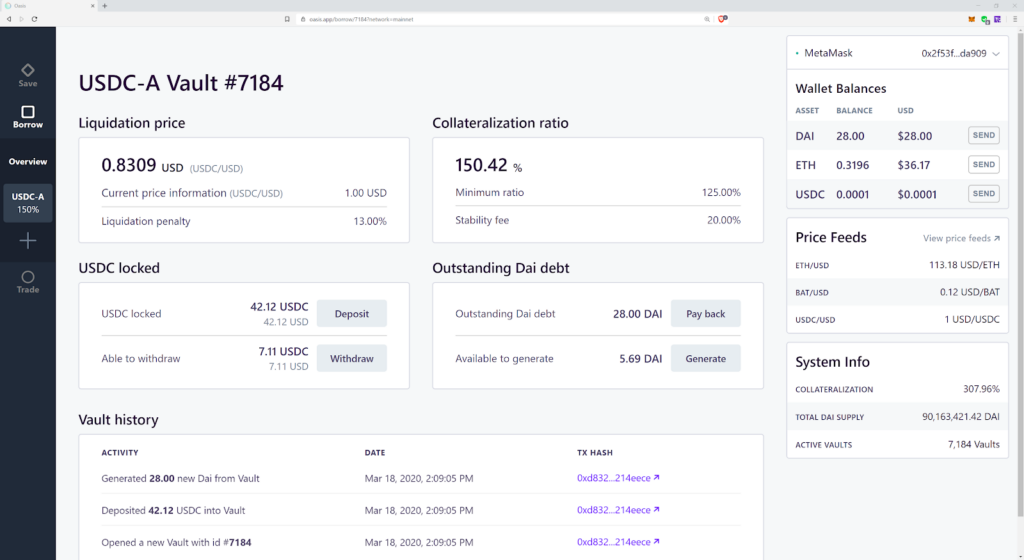 Now that I’ve done my part, I don’t actually want to sell these DAI, they are precious, being worth more than USDC, so I decide to close it out, which means—yep you guessed it—more approval transactions! Yeet! 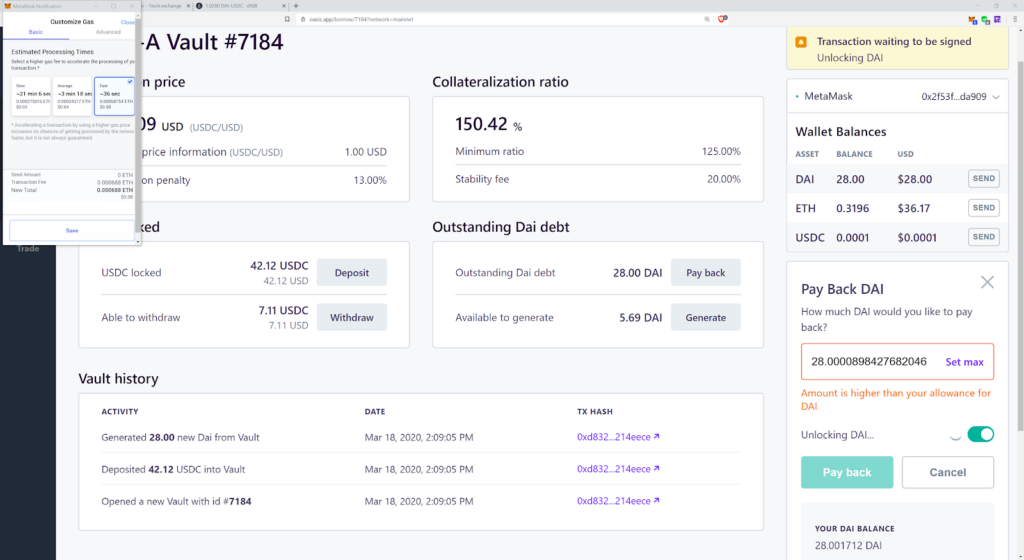 With that done, I can now finally send this forsaken DAI back and reclaim my USDC, which means, even more transactions. 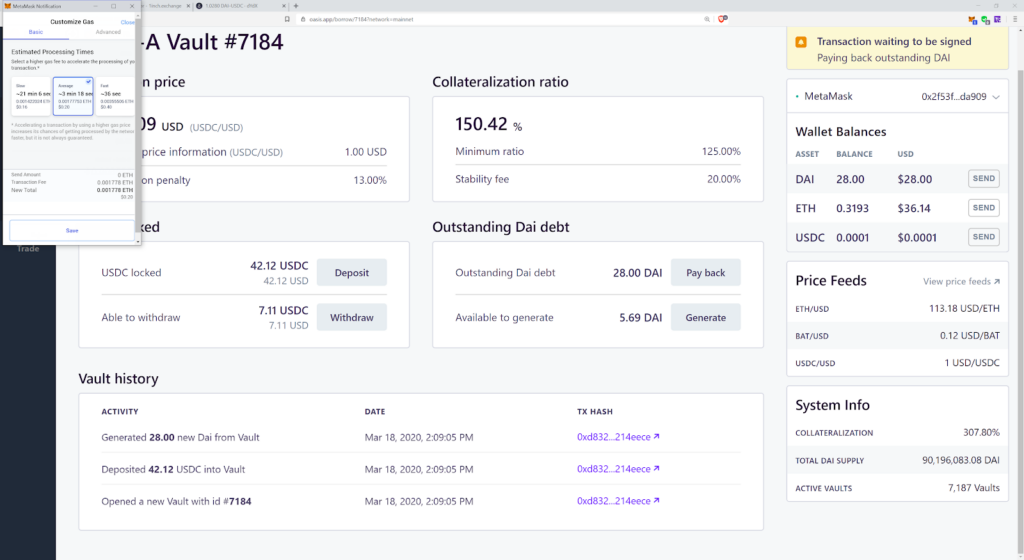 And finally, we’re back to zero. 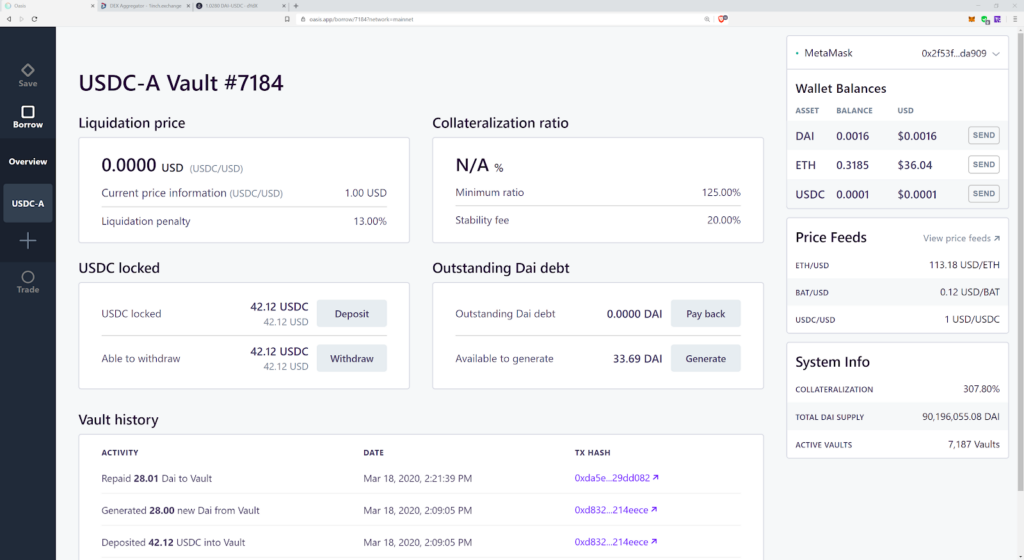 As you can see, the process is globally the same as before. It’s pretty simple and straightforward, but it’s also fairly clearly set up for an emergency. Paying 20% interest per year on stablecoins to create more stablecoins is hardly a smart move to do over long term, and currently only really makes sense to help close out the premium on DAI price, which if it also a trader the ability to earn 2-3% over a few days more than pays for the interest they will pay on vaults backed by USDC. Likely many more will do it not out of profit motive, but out of some sense of altruism to the vision of MakerDAO.

Of course, it’s easy to criticize from the cheap seats. But the question is this: if the only way to salvage these decentralized systems in times of stress is to revert to centralized assets, and/or rely on people’s commitment to the cause, how sustainable are they really?

Until we have a good answer to that question, perhaps we should revert to calling MakerDAO and DeFi what it really is: an interesting experiment that carries a lot of risk.