Frieze Art Fair in London had a dearth of NFT art—but look beyond the big shows, and the British capital’s crypto art scene is buzzing. 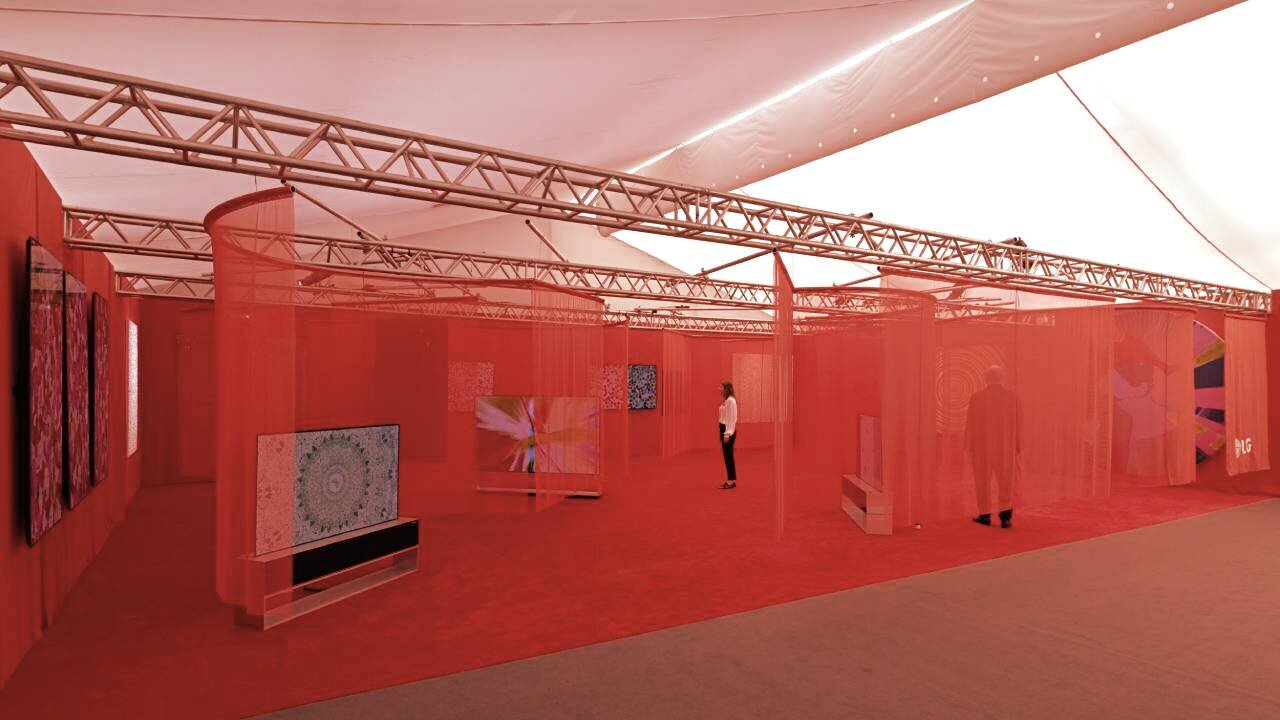 Frieze Art Fair, one of London’s oldest and most prestigious art events, stumbled into the post-pandemic, post-Brexit world for its 2021 edition earlier this month.

Crammed in between two other major art fairs, Art Basel and Fiac Paris (all three were canceled last year due to the pandemic) from October 13-17, Frieze London was low on crowds compared to years past. Still, there was a palpable sense of optimism that in-person events would lure buyers with the promise of shiny in-season objets d'art.

Coronavirus be damned, I packed my Gucci hat and took off for London to see what all the hype was about.

NFTs, or non-fungible tokens, have swept through the art world like a tsunami in recent months. The cryptographically unique tokens can be used to demonstrate proof of ownership over digital artwork, and with multi-million-dollar sales grabbing headlines, venerable institutions like Christie's and Sotheby's have been quick to seize on the opportunity for cash. And vaunted London galleries like House of Fine Art and Unit London both ran physical NFT exhibitions this month.

But I was surprised to discover that the NFT boom appeared to have passed Frieze London by, with the main fair having very little to offer by way of crypto art. Instead, the fair was awash with stoic-looking paintings, dusty sculptures and art dealers with more botox than Egyptian mummies. Frieze this year felt like it always had.

At least Art Basel had Kenny Schachter’s NFTism booth—spun off from the recent London exhibition—which made Frieze London look distinctly behind the times, crammed with more third-tier paintings than a Sunday afternoon flea market.

The only hint of NFTs at the entire Frieze fair came in one pop-up space showcasing NFTs by the renowned British artist Damien Hirst. Using massive new OLED screens made by LG, the space became an immaculate setting for expensive digital wall art.

Hirst isn’t the only big artist to foray into NFTs, however, and London has become somewhat of a crypto art mecca in recent years; Frieze missed it.

As always, young money tends to gravitate toward the new. Beyond Frieze, London has much to offer by way of digital art, buoyed by a younger cohort of artists, curators and advisors. NFTs and exciting new art and tech startups, investors, and accelerators are leading the way. Many artist-celebrities have also aped in, big time—including some rather unexpected and avant garde artists too.

The London-based a/political, founded by Andrei Tretyakov, has been nurturing a stable of artists to support some of the more radical possibilities within crypto.

One of them, the Russian maximalist performance artist Petr Davydtchenko, who studied at London’s RCA (and was made famous in the annals of Decrypt as the artist who ate a bat and turned the video into an NFT), is adopting blockchain and crypto as a means of disrupting the machinations of capital. Davydtchenko has released a new series via OpenSea of his new meal du jour: rats.

London has been an especially fertile ground for disruptive artists (and for rats), but it has also nurtured a number of curators who are harnessing new technologies to unsettle the art market. With major auction houses like Sotheby’s, Christie’s and Phillip’s all taking a stake in NFTs, this month has also included a number of sales by these powerhouse auctions.

Over at Somerset House, in a show facilitated by the auction house Christie’s and curator Daria Borisova, five works were displayed and offered by the Nigerian artist Osinachi for sale as NFTs. The works, styled after the paintings of David Hockney (not an NFT fan), consisted of colorful portraits made in Osinachi’s signature style, rendered in Microsoft Word—a refreshingly original take on natively digital art.

They were the first NFTs to be presented at 1:54, the annual fair celebrating contemporary African contemporary art, installed in a beautiful neoclassical building overlooking the banks of the Thames in central London. The five Osinachi works brought in £155,000 in sales, including fees.

The British Museum has also made its first foray into NFTs, selling 200 works by the Japanese artist Katsushika Hokusai as digital postcards to accompany a solo show of the artist’s work in the museum’s venerated halls. The sale was brokered by LaCollection, a startup specializing in authenticating limited digital editions of certified artworks—digital twins that are being auctioned on SuperRare.

London’s art market has certainly taken note of these and other projects, with the Financial Times recently describing the city as “a crypto art capital,” dozens of artists and tech accelerators are now using it as a base to launch global, data-driven, web 3-inspired projects.

Artamonovskaja told Decrypt that while the traditional art market may be shaky, perhaps Brexit and the pandemic has had a lot to do with digital art’s resurgence in re-connecting the British capital to global audiences and marketplaces.

“The pandemic facilitated the inevitable move towards digital technologies that the art world was reluctant to adapt to for many years,” she said. “London has always allowed innovative business to flourish." Artamonovskaja pointed as an example to the work of London-based incubator Outlier Ventures, which is funding crypto projects including Cosmos, Brave and Boson Protocol.

Artamonovskaja also believes crypto and NFTs can be a force for good. To this end, she recently partnered with PETA on an NFT drop called Not From the Zoo, a series of 8,888 collectibles with rarity traits, the proceeds of which were donated to help at-risk animals in danger of exploitation.

London has also become a breeding ground for a number of interesting art collaborations that use Web 3 and blockchain to ease entry into the art market, which is normally sealed off by gatekeepers and elite galleries and curators. The technology behind some of these tools is being developed by startups associated with VCs like Fuelarts’ Denis Belkevich, who hosted a demo day accelerator for four art + tech start-ups on October 28 , aimed at pairing crypto startups with the art world.

Political turbulence, Brexit, and COVID-19 turned investors' interest towards crypto and made it a "more opportunistic" market, Belkevich said. Thanks to the growth of NFT assets, he added, "art strategists—top auction houses and dealers—have made a considerable investment contribution to the art + tech world during the pandemic."

Belkevich singled out institutional and VC investors' excitement towards the Masterworks art platform, which offers fractional ownership of art. It received a $110 million investment this fall in a series A funding round led by Left Lane Capital.

Among the projects Belkevich is working with is V-Art, a platform for digital art founded in Ukraine by IP lawyers, IT specialists, and artists. Its aim is to help gallerists and artists use blockchain to bridge the digital and physical art worlds, where immersive experience and rights management is often what determines success.

Those who are currently in London, go and enjoy Frieze for our sake👌 https://t.co/KjwxVTdEyy

V-Art cofounder and CEO Anastasiia Gliebova believes that NFTs and blockchain technology have the power to disrupt the notoriously opaque art market for good. And London is ideally placed to capitalize on this, said Gliebova: “As one of the world’s great metropolises, London has a rich history as a financial, entrepreneurial and cultural epicenter bringing together diverse actors into a developed infrastructure and thereby fostering innovation.”

The city’s value proposition may have been “somewhat negatively affected by Brexit,” Gliebova added, but it’s only served to highlight the importance of the free flow of information, people and capital—the movement of which, “makes for a substantial part of what makes London special.” That goes double for the art market, “which is why NFTs and digital umbrellas bringing together various aspects of the industry—from artists to museums to galleries—is more important than ever before.”

.ART founder Ulvi Kasimov comments on the current sharing economy and how his new Digital Twin project can help the art world adjust to the changes.#art #digitalart #artmarket #economy https://t.co/agO3qOSCAP

During Frieze week in London, .ART sponsored the 6th edition of the Digital Art Prize, which went to Wondeur, a Toronto-based startup using AI to disrupt the traditional art market.

With everyone from celebrities to brands and major auction platforms aping in, NFTs and digital art clearly have a strong future in the British capital. It’s about time Frieze—and other art fairs like it—take notice.