Gary Gensler has publicly opined about cryptocurrency a lot during the last few days. Here’s everything we know. 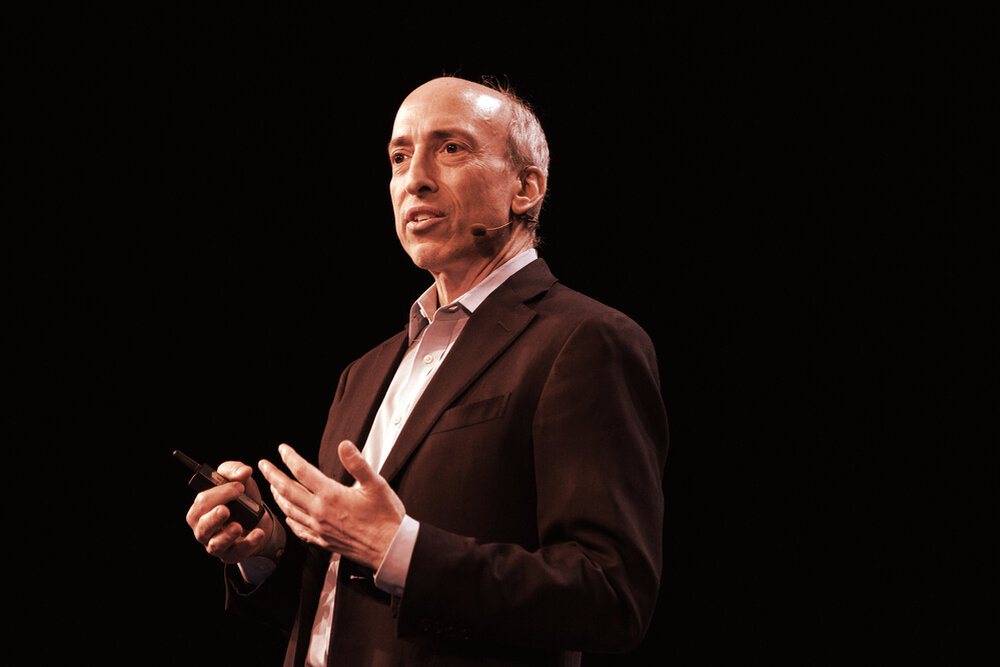 SEC Chairman Gary Gensler talked crypto twice yesterday, once during an exclusive interview with CNBC, and again at an address before the Aspen Security Forum.

Ever since Gensler was nominated by President Biden as Chair of the Securities and Exchange Commission (SEC) in February, speculation about his approach to crypto almost exclusively hinged on the fact he taught a blockchain course at MIT.

Now, the crypto industry knows a lot more about Gensler’s view on crypto.

Gensler—much like Senator Elizabeth Warren (D-MA)—is all in on the need for consumer protection in crypto, echoing her call for "rules of the road."

“We're an investment protection agency and right now this asset class, Bitcoin and the hundreds of other coins that investors are trading at, is a speculative asset class,” said Gensler during his interview with CNBC. “What we want to do is provide some of the basic protections against fraud and manipulation.

"I'm pro innovation but we also need rules of the road," says @GaryGensler. "Satoshi Nakamoto's invention if it is going to meet its potential it needs to come within public policy frameworks." #crypto #bitcoin pic.twitter.com/ohT435NYp4

What comes next is far from a guarantee, but there’s no doubt that Gensler will push for those consumer protections in the near future. “I'm pro-innovation but I'm also pro the basic policy norms of investor protection guarding against illicit activity, financial stability,” he added.

2.
2.
Some DeFi platforms could be hosting securities

Protecting consumers from what, you ask? Decentralized finance (DeFi).

According to Gensler, thousands of cryptocurrencies—or “tokens” as he described them at the time—are operating as unregistered securities. This position hits right at the heart of crypto’s DeFi subculture.

“While each token’s legal status depends on its own facts and circumstances, the probability is quite remote that, with 50 or 100 tokens, any given platform has zero securities,” Gensler said.

One of the fundamental reasons why crypto enthusiasts were happy about Gensler’s appointment was that they expected him to usher in a new age of Bitcoin ETFs, or exchange-traded funds.

Six months later, and no such fund has been approved. Gensler did say during his CNBC segment that he is looking forward to staff reviews of ETF applications, but in June, he did pour some cold water on the idea.

“I’m saying this in my own voice, that the underlying Bitcoin cash markets, there’s not a robust oversight that you have in the stock markets or in the derivatives markets,” Gensler said at the time.

If Gensler’s response is anything to go by—and it obviously is—the US might have to wait a very long time before its first Bitcoin ETF gets off the ground.

4.
4.
Cryptocurrency is not money

On CNBC, Gensler credited Satoshi Nakamoto’s Bitcoin project as acting as a “catalyst” for “central banks around the globe to think about new payment systems.

This comes as good news to cryptocurrency enthusiasts, who point to a rapidly digitizing world as a fundamental reason for crypto adoption, but the good news stops there.

“No single crypto asset, though, fulfills all the functions of money,” Gensler said at the Aspen Security Forum. In other words, no single cryptocurrency provides a store of value and a unit of account, while also acting as a medium of exchange.

Gensler did accept that cryptocurrencies often act as a medium of exchange—but that’s not always a good thing.

“To the extent that it is used as such, it’s often to skirt our laws with respect to anti-money laundering, sanctions, and tax collection,” Gensler said in his Aspen address.

The problems don’t stop there, however. Gensler also added that cryptocurrencies can “enable extortion via ransomware,” pointing to the massive ransomware attack that hit Colonial Pipeline earlier this year.

Gensler “wouldn’t have gone to MIT” if he wasn’t interested in using technology to benefit economic growth, he said at the Aspen Security Forum.

However, that alone is not enough to make the SEC Chair into a crypto believer. At his Aspen address, Gensler borrowed a key phrase recently used by Senator Warren when he likened the crypto industry to the Wild West.

“Right now, we just don’t have enough investor protection in crypto. Frankly, at this time, it’s more like the Wild West,” he said, adding that a lot of people “will be hurt” if the SEC doesn’t take action.

7.
7.
Stablecoins could impact on national security

According to Gensler, stablecoins “may help facilitate those seeking to sidestep a host of public policy goals.”

Stablecoins have generated a lot of interest and criticism of late, especially since Tether’s controversial reserves breakdown in May. Treasury Secretary Janet Yellen has stated that the U.S. must “act quickly” on stablecoin regulation; Gensler apparently agrees.