SushiSwap: What happened, What it Means for Defi and What's Next.

SushiSwap's migration is hours away, with $1.3B at stake. Here's what you need to know.

The SushiSwap saga continues today with its migration.

Decentralized finance is living through what may become one of its most defining moments. In less than 48 hours, a two-week-old upstart will attempt to drain liquidity from DeFi’s largest exchange, in a never-before-attempted vampire-like attack, which right now has $1.3B in tokens at stake.

Here’s a quick summary: An anonymous developer copied Uniswap to make SushiSwap, which was meant to be exactly the same, except it added a token, SUSHI, and token rewards for liquidity providers and token holders. Ten days later, the anonymous dev sold all his SUSHI for $13M in ETH and gave up control to the head of a centralized exchange. This CEX CEO is ushering forward SushiSwap’s original plan to bootstrap its own liquidity by draining Uniswap’s.

From the outside, it may seem like a ridiculous food-themed exit scam. But even if SushiSwap is tainted by the apparent betrayal of its founder, it represents an emerging model for building and investing in crypto. It may be a flawed, early iteration, but it’s a new paradigm nonetheless and those holding on to their old ways, at least in this wild west within the wild west, will likely have to adapt.

Some required context: Uniswap works by replacing order books of traditional exchanges, with pools of tokens paired with ETH, which guarantee a swap can always happen. Liquidity providers (LPs) are incentivized with trading fees, and there is no native governance token.

SushiSwap was announced on Aug. 26 as an “evolution of Uniswap” which added “community-oriented features” to further benefit the actors involved — namely, a token. 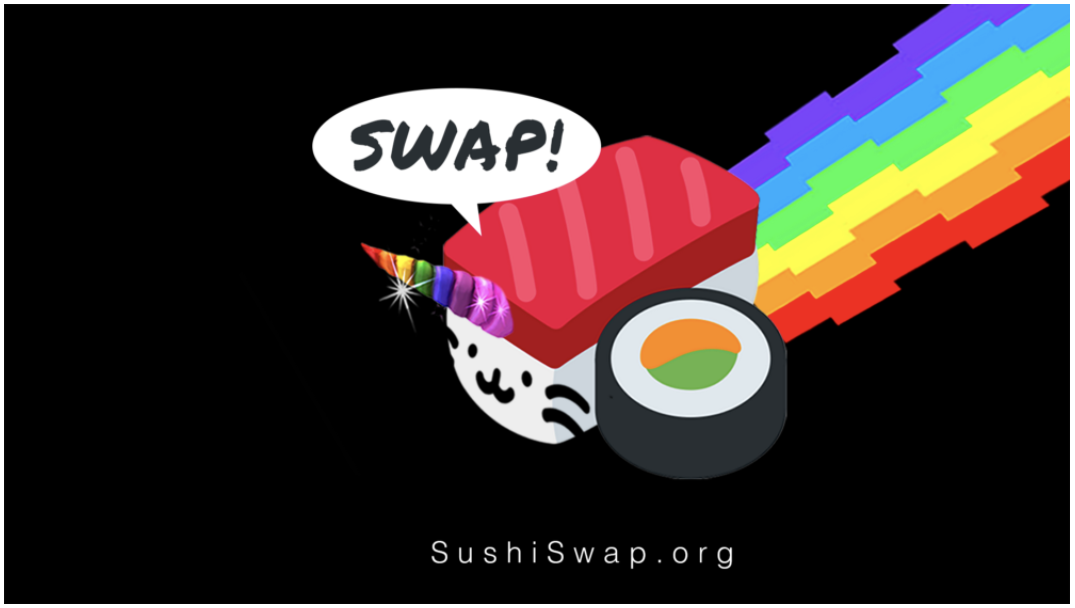 But SushiSwap’s main innovation was in its plan to not only indirectly compete with Uniswap by providing additional incentives, but to directly suck its liquidity through its aptly named scheme “Vampire Mining.”

To understand the concept of Vampire Mining, you have to first understand that Uniswap LPs get a token, which represents their deposits in the DEX. The way for initial participants in SushiSwap to earn SUSHI, was to deposit Uniswap’s LP tokens. These Uniswap LP tokens would then be swapped for the underlying asset so that Uniswap liquidity would become SushiSwap liquidity.

It is simply unheard of in the “real world” to not only copy a business but literally steal its clients. DeFi works as an endlessly interconnected ecosystem because the protocols on it are open-sourced (they can be copied and built on), and because they create things such as Uniswap’s LP tokens, which become composable pieces that can be used elsewhere. These features enabled SushiSwap and its Vampire scheme.

SushiSwap was not only able to capture much of Uniswap’s LP tokens, it also catapulted the $285M in Uniswap, to$1.5B in just nine days, as traders eager to get their hands on LP tokens to deposit in SushiSwap flowed into the platform.

SushiSwap founder Chef Nomi had by this point become a rising star in the DeFi ecosystem. The dev hiding behind a cartoon character avatar had spearheaded a protocol that was going head to head with DeFi’s darling DEX. 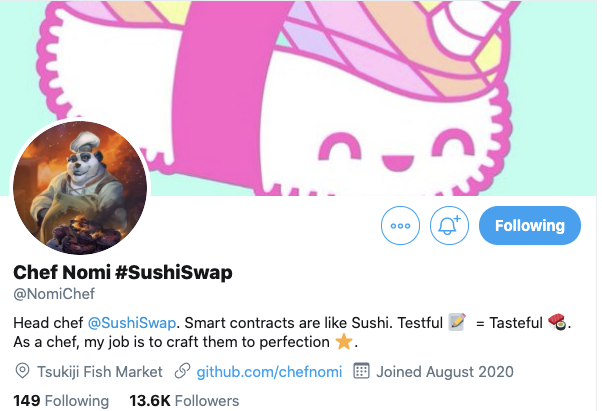 Sure, he had outright copied Uniswap, but in a space where open-sourced platforms are the norm and expectation, it was fair game. The hero aura came from his stated intention to create the “people’s DEX.” Where Uniswap was backed by Silicon Valley venture capitalists, and led by a centralized team that can be counted with one hand, SushiSwap was owned and governed by its token holders, aka its community.

FTX CEO Sam Bankman-Fried (SBF from now on) even proposed that the project be also built on Solana, the blockchain where FTX launched its own decentralized exchange, Serum. SushiSwap on Solana would be able to use Serum’s order books for liquidity.

SBF had become a big SUSHI whale. Two wallets linked to Alameda Research, which he leads, have farmed at least 9% of SUSHI in existence, according to Alex Svanevik, co-founder of blockchain data firm Nansen.

Nomi was feeling confident. The dev proposed to do the Uniswap liquidity migration earlier than planned after two audits came through with no major issues, and started going after Uniswap founder Hayden Adams on Twitter.

“You got grants. You paid yourself NYC salary. You have everything. So what do you complain?” he tweeted. “I don't sell any token. I pay for gas deployment myself. I distribute everything except funds for development. Actually, I feel very offended you say I'm an opportunist.”

The “funds for development” Nomi references in the quote above are the 10% of SUSHI tokens minted that are allocated to developers building the protocol —which at the moment was just himself.

Meanwhile, the recent cryptocurrency rally was faltering and ether, which had made new highs for the year, dipped below $400 once more in the first days of September.

Nomi had said: “I don’t sell any token.” By Sept. 5, the dev fund, which was solely controlled by him, was holding about $13M worth of SUSHI —and he traded it all for ETH. On Uniswap no less.

There are no secrets in open blockchains. Traders quickly realized the move and SUSHI price tanked by more than 70% in one day to $1.2 after Nomi’s defection.

Following the public outrage, Nomi said he did it because he “cares about the community” —though how a 70% plunge in the token price helps the community is anyone’s guess— and transferred the dev fund to a multisig contract (a smart contract which requires more than one person to approve transactions).

He pledged to continue working with the project but appeared to backtrack one day later saying he hopes “SushiSwap does well without (him).”

SUSHI holders despaired as SushiSwap appeared to flounder in a puddle of soy sauce with no one to pick up the chopsticks — but they didn’t have to wait long. SBF swooped in not even one day later, laying out a “way forward for Sushi.”

SBF called Nomi a “piece of shit” and said the anonymous dev should give up control. And while he didn’t explicitly ask for control, he made a clear case for why he should have it.

He also highlighted that the offer to build another copy of Serum still stands, and if it happens he would “personally return 5M SUSHI to the community.”

SBF detailed in a long Twitter thread how he got involved with SUSHI, not only because it “offered great yield” but also because it “showed the promise of DeFi,” and he was “really excited for a community-owned AMM” to prosper.

But for all his talk about community and belief in SushiSwap, wallets linked to SBF’s firm Alameda Research had been farming and also “heavily dumping” SUSHI tokens, according to Nansen’s Svanevik. Money talks after all.

Regardless, Nomi didn’t skip a beat, and on the same day, the founder of the supposed fully decentralized and community-owned DEX, made the unilateral decision to transfer control of SushiSwap to SBF.

At that point, conspiracy theories that Chef Nomi and SBF were actually the same person reached a fever pitch, while others continued to argue that Nomi was actually the CTO of data provider Band Protocol. Everyone mentioned has denied any link to the disgraced chef.

SBF made an open call on Twitter for whoever wanted to be part of the multisig controlling SushiSwap. “We'll take the top 20 by likes, and have a proper vote on them,” the keys will be transferred to the winners and “Sushi shall be back in the community's hands.”

In the two days that have followed the transfer of control, there was also a bug found in the code to drain Uniswap liquidity.

The bug on the migration code was fixed yesterday and a 48-hour countdown until SushiSwap attempts to drain Uniswap’s liquidity kicked off.

With less than two days away from migration, there is still $1.3B of Uniswap’s LP tokens sitting in SushiSwap. The token has rebounded from the $1.2 low and is hovering around $2.8.

It could be that the triple-digit annual yields are too tempting for traders to resist. They may stick around to farm SUSHI until the very last minute and then jump ship.

But some may stay, lured by SBF’s promises of extra SUSHI if they do. That means those behind SushiSwap may soon be responsible for carrying potentially* hundreds of millions of dollars in tokens from one open protocol to another one, with code that hasn’t been tested and which had a bug days ago.

DeFi has changed in the space of two short months. Token rewards on steroids (aka yield farming), which Compound Finance’s COMP, sparked the shift. Yearn Finance, inspiring Defiers with a 100% community-owned token, with no ICO, pre-sale or special allocations, pushed it further, and YAM, a community-owned, meme token with the only purpose of farming YAM opened the floodgates.

SushiSwap, with its founder that bailed and handed control to the CEO of a centralized exchange, showed it’s not as simple as saying: community good / VCs bad. The Uniswap team has produced one of the most valuable and useful protocols on Ethereum with venture backing —DeFi likely wouldn’t have grown to where it is today without Uniswap.

But it also showed that DeFi participants’ expectations have changed. Protocols are expected to share governance and revenue with users, and the best way to do that at the moment is with tokens. Those who don’t adapt, are likely to be forked.

In the case of Uniswap, if it’s not SushiSwap, others will follow (and they already are). The best remedy will likely be its own Uniswap token.