DeFi on the path to disrupt traditional finance

Founders of cutting-edge DeFi startups say everything is being rebuilt from scratch.

DeFi is a landscape still in its early stages, but ripe with potential to massively disrupt traditional financial systems, according to the founders at some of the most cutting-edge companies in the growing ecosystem.

In a discussion today at the Ethereal Summit, the panelists—from asset management platform TokenSets, margin lending protocols dYdX and bZx, and Indian neo bank NOU—also helped to define decentralized finance and lay out their vision for its potential.

“Once you have that first form of digital money, you should be able to do other things like lend, borrow, transact, build derivatives or perform asset management on it. Really, that’s what DeFi is,” said TokenSets CEO Felix Feng.

He said DeFi was a natural next step after the introduction of Bitcoin and decentralized money: “We’re building this from a first principles perspective. Instead of building on top of the existing financial world, we’re rebuilding everything from scratch, and everybody on this panel is building a small component of that.”

Traditional banks not up to the task

Indian neo bank NUO co-founder Varun Deshpande had been working for over five years to integrate with financial institutions before discovering DeFi. “The problem was, banks didn’t have APIs for us to create something on top of, and that’s how we discovered DeFi,” he said. 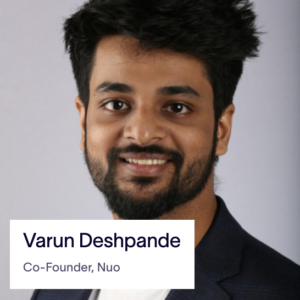 “When we [got involved], the term DeFi didn’t exist—we were just attracted to being able to build on something without someone’s permission. DeFi is essentially FinTech 2.0, where we get rid of the middle man and make systems as efficient as possible... for peers all around the world.”

Crypto is made for DeFi

Margin lending platform dYdX founder Antonio Juliano explained how he was struck while working at Coinbase by how much time and effort was spent dealing with traditional financial integrations compared to decentralized alternatives.

“I would estimate about 75% of the company’s effort goes to dealing with the traditional payment side. A very small proportion is actually integrating with the crypto side... It’s much easier to build these new financial products in DeFi,” he told the panel.

“DeFi is a continuation of the promises that we saw with decentralized money in Bitcoin... But what’s the point of money if you can’t do anything with it? Decentralized exchanges, decentralized lending, these are the reasons a lot of people were excited about crypto in the first place.”

DeFi is a process, not a destination

“We look at DeFi as a process and a paradigm rather than a destination. DeFi companies come into the world looking to [change], usually we start out non-custodial and we graduate to being decentralized,” he said.

“You can think of DeFi as decentralizing the micro-level actions that developers have to do with the protocol all the way up to the macro interaction where you’re setting general policies and upgrading contracts. We see DeFi as something that is in the process of evolving.”