Jimmy Song: The making of a Bitcoin maximalist

Bitcoin’s staunchest advocate reveals why he’s excited about its progress as a humanitarian solution to repressive regimes—from Hong Kong to Venezuela. 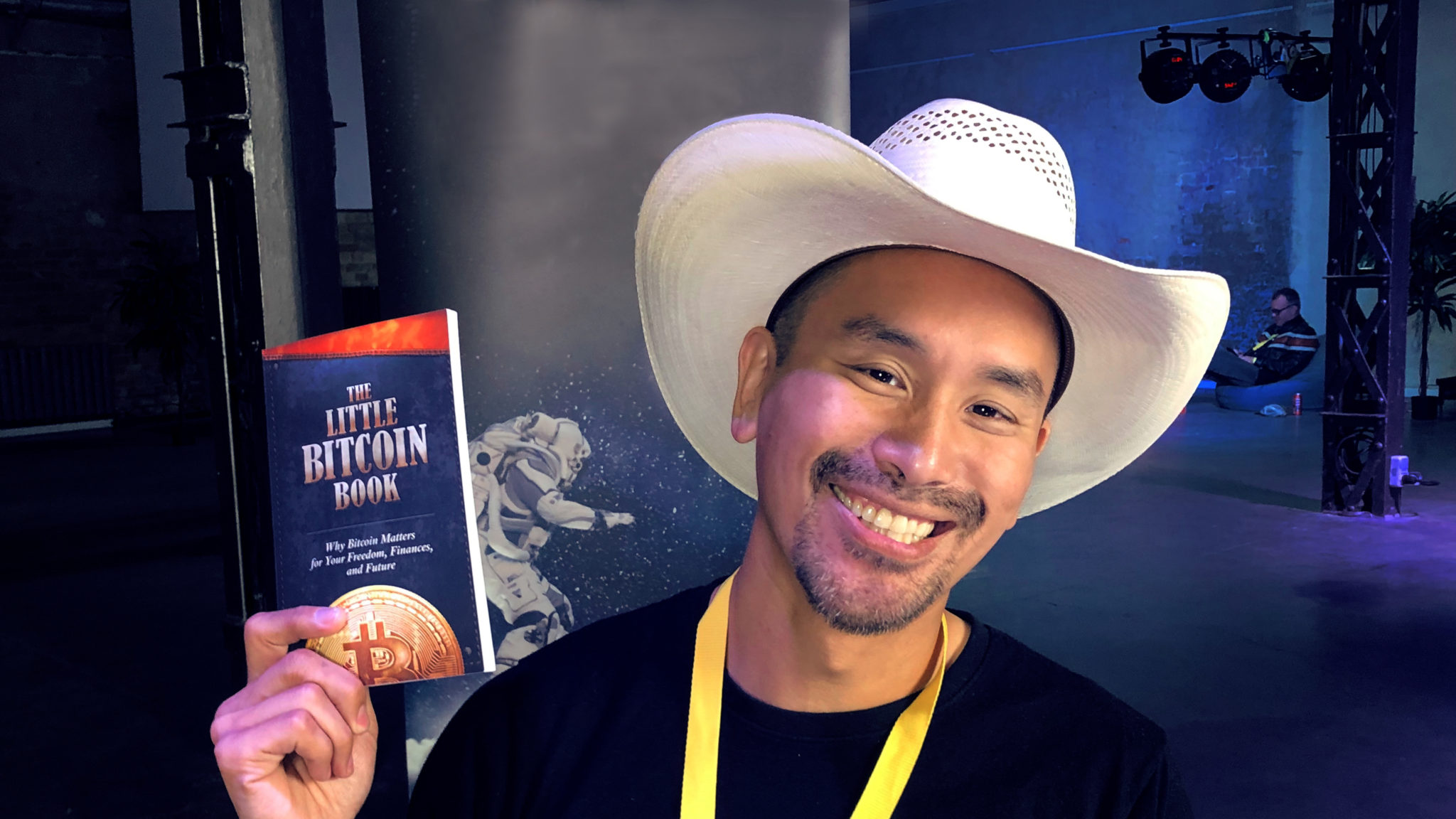 Bitcoin entrepreneur and educator Jimmy Song is standing on an upturned beer barrel in Riga’s oldest cellar restaurant, surrounded by ravaged hunks of meat, dead birds and androgynous-looking serving staff dressed like characters in the Latvian version of Grimms’ Fairy Tales. An auction is in progress.

To McCormack’s mild chagrin, Song later announced that the hat was one of many. But the proceeds of its sale will go to the worthiest of Bitcoin causes: the distribution of his latest venture, “The Little Bitcoin Book,” which he describes as a gentle introduction to Bitcoin, and its potential to change the world from a monetary perspective.

Song was in Riga for September’s Baltic Honeybadger Bitcoin conference. The next day, at the event, Decrypt sat him down to find out about the latest evolution in the career of Bitcoin’s most amiable maximalist (when he’s wearing his white hat,) and the iciest of altcoin adversaries (when he wears a black one.)

And how a man who started off wanting to be a maths teacher now earns his crust in bitcoin by eating meat and teaching human rights activists how to use bitcoin to help people out of adversity.

It all started last June, Song told us, when he was invited to Oslo for the main annual gathering of the US-based Human Rights Foundation, Oslo Freedom Forum,

The former diplomat was seated next to him at dinner, and Song said that Yong-ho was entranced by the possibilities afforded by Bitcoin, even in North Korea. The internet is already available among the elite, he told Song, and he was confident that, once it trickles down to the general populace, people would find a way to transact.

But, in internet-enabled countries with repressive regimes, things are already progressing. In Iran, people are converting their assets to bitcoin to bypass U.S. sanctions, said Song. “They’re able to do that without needing anyone's permission and that's significant. I'm excited about the fact that bitcoin is making a big difference in all of these distressed places around the world. It’s a significant part of what Bitcoin is supposed to be.”

They can’t take it away

The increase in authoritarian regimes means that Bitcoin’s ability to give people self-sovereignty will become increasingly important, said Song. And data bears this out. This week, analysts pointed to a spike in transactions in Hong Kong, with interest in Bitcoin reaching unprecedented levels as the political crisis there intensifies.

Song said he is also confident that many of the 10% of Venezuelans who have fled the country were aided by the ability to preserve their wealth by converting everything to bitcoin before crossing the border.

“The biggest way that any tyrant represses anyone is through money. But if you have it in bitcoins, they can't take it away, right? You have gold, they can still take it away. Yet Bitcoin, they can’t take it away. And that’s… that's gigantic!” he said.

To spread the word, he’s been working with the non-profit Human Rights Foundation teaching activists how bitcoin might be useful to them—for getting donations to their operatives on the ground, for instance. He’s also shown them fundamentals, such as how to use a bitcoin wallet and how to sell bitcoin locally.

“Essentially, it's a tool of freedom for people under tyranny and that's significant,” he said. “It’s becoming a much bigger part of the human rights movement all around the world. “

A little bit of Bitcoin

The Little Bitcoin Book was born to capitalize on that momentum, he said. The book was published in August and tells the story of what’s wrong with money today, and why Bitcoin is a viable alternative to the current system. It describes in simple terms what Bitcoin is, how it works, why it’s valuable, and how it affects individual freedom and opportunities.

Song is just one of its eight authors—crypto thinkers, investors, entrepreneurs, and human-rights proponents. Chief among them are Alex Gladstein, chief strategy officer for the Human Rights Foundation, and board member and venture capitalist Alexander Lloyd. Others include Lily Liu, cofounder of the micropayment company Earn.com, Alejandro Machado, of the research consultancy, the Open Money initiative, and Alena Vranova, chief strategist at key security company Casa.

They hatched the plan to write the book at the Oslo Freedom Forum, and rented a house in Redwood, California for a few days over the summer to complete the job.

Now, Song is engaged in using his influence, as one of Bitcoin’s most vocal advocates, to spread the message in the book.

The making of a Bitcoin maximalist

Song was born in Korea and moved to the U.S. at age seven. He was good at maths and computer programming and became a software developer, working for different companies in a wide variety of fields.

Then, in 2011, he discovered Bitcoin and, galvanized by FOMO, decided to invest.

But he found the primitive Bitcoin ecosystem frustrating, and that led to work on a number of Bitcoin projects, including the Armory wallet, the transaction platform Monetas, and blockchain solutions company Paxos.

Gradually, he has evolved into a popular speaker at Bitcoin conferences; an educator who runs courses in blockchain programming and development; a partner at venture capitalist firm Blockchain Capital (since January) and an independent investor. Last July he invested in Bahrain-based cryptocurrency exchange Rain.

In common with other Bitcoiners, Song is unwavering in his conviction about the transformative properties of Bitcoin, and why every other asset class pales into insignificance.

“Bitcoin enables the highest degree of self sovereignty—more than gold, and certainly a lot more than something like Ethereum,” he says, referring to the second most valuable cryptocurrency by market cap.

His conviction led to his now infamous $500k bet with Ethereum cofounder, and the founder of ConsenSys, Joe Lubin that the promise of the decentralized applications will never be realized by Ethereum. (Obligatory disclosure: Decrypt is funded by Consensys but editorially independent.)

Song has said that he considers Ethereum to be entirely permissioned, and cites the humiliating and expensive hack that befell the platform’s grandest experiment in decentralization, The DAO. The incident led to developers and stakeholders electing to fork the blockchain to ensure that some $50 million was not lost.

Essentially, for Song, it boils down to control. He believes that “Bitcoin is the only digitally scarce asset that's also decentralized” and that, in common with fiat currency—money, other cryptocurrencies have a “single point of failure,” they require permission from somebody else. Gold, meanwhile, can be taken away from you, he said.

The fact that Bitcoin is different makes it very important and interesting for storing value, he believes.  And never more so than now.

Song’s approach to finance extends to his personal life too. Bitcoin, he said, has meant that he approaches most of his life with a view to the long-term. He describes this in economic terms as “low” as opposed to “high” time preference, a form of delayed gratification, and his wife and six children (all under 12) are a big part of that.

Song is looking forward to seeing a new generation of Bitcoiners develop; a generation who have grown up alongside digital currency. He thinks they’ll grasp Bitcoin’s significance instinctively. After all, like dissidents from an oppressive regime, “they're used to having things taken away from them by their parents. Do you really own it if your parents are able to take it away from you?” he asks.

Now there’s a thought for the world’s children to mull over.