Fulcrum: a high stakes way to borrow and lend ETH

Fulcrum took a bad rap last week when some exploited the platform for hundreds of thousands. Here's how it's supposed to work.

Fulcrum lets you borrow or lend money in an instant.

It’s been a horrible or exciting week—depending on whom you ask—for DeFi. No one had it more than the team at bZx network, the group behind DeFi margin-lending and borrowing platform, Fulcrum. On February 14, Valentine’s Day, a hacker/trader (depending, again, on whom you ask) managed to create a transaction that earned them a roughly $350,000 profit at the expense of Fulcrum users.

The bZx team responded by freezing the platform, opening it a day later and issuing a post-mortem explaining the attack. But just one day later,  the hacker hit hit again, this time with a completely different type of transaction that netted $645,000. At the time of writing some functionality on Fulcrum is still paused.

Wait. Was that the flash loans thingy?

I have strong feelings about that.

What are flash loans?

Good question, it’s too technical though for you, but in short Flash Loans can be thought of as instant, and atomic transactions which borrow and then return tokens all within the same transaction. This means that all in the same action, you borrow an asset, do something with it, then repay it. And because it’s “atomic,” either everything in a chain of transactions completes or none of them do.

It deserves a greater focus, which we’ll come to, but for now what we are going to do is look at the platform from which  the flash loan trader took money. And I’m going to—wait for it—put my money into it.

Fulcrum is a DeFi platform that allows users to borrow and lend ETH and ERC20 tokens. It also allows for margin trading. Remember that leverage thing that we talked about on dYdX? Yes, kind of like that, but when you have value it’s tokenized.

Before you ask, that means that when you make a loan, you can trade that loan like any other token. Why? Because that means we now have a token whose value should go up over time when the interest is paid to it. Cool, eh? 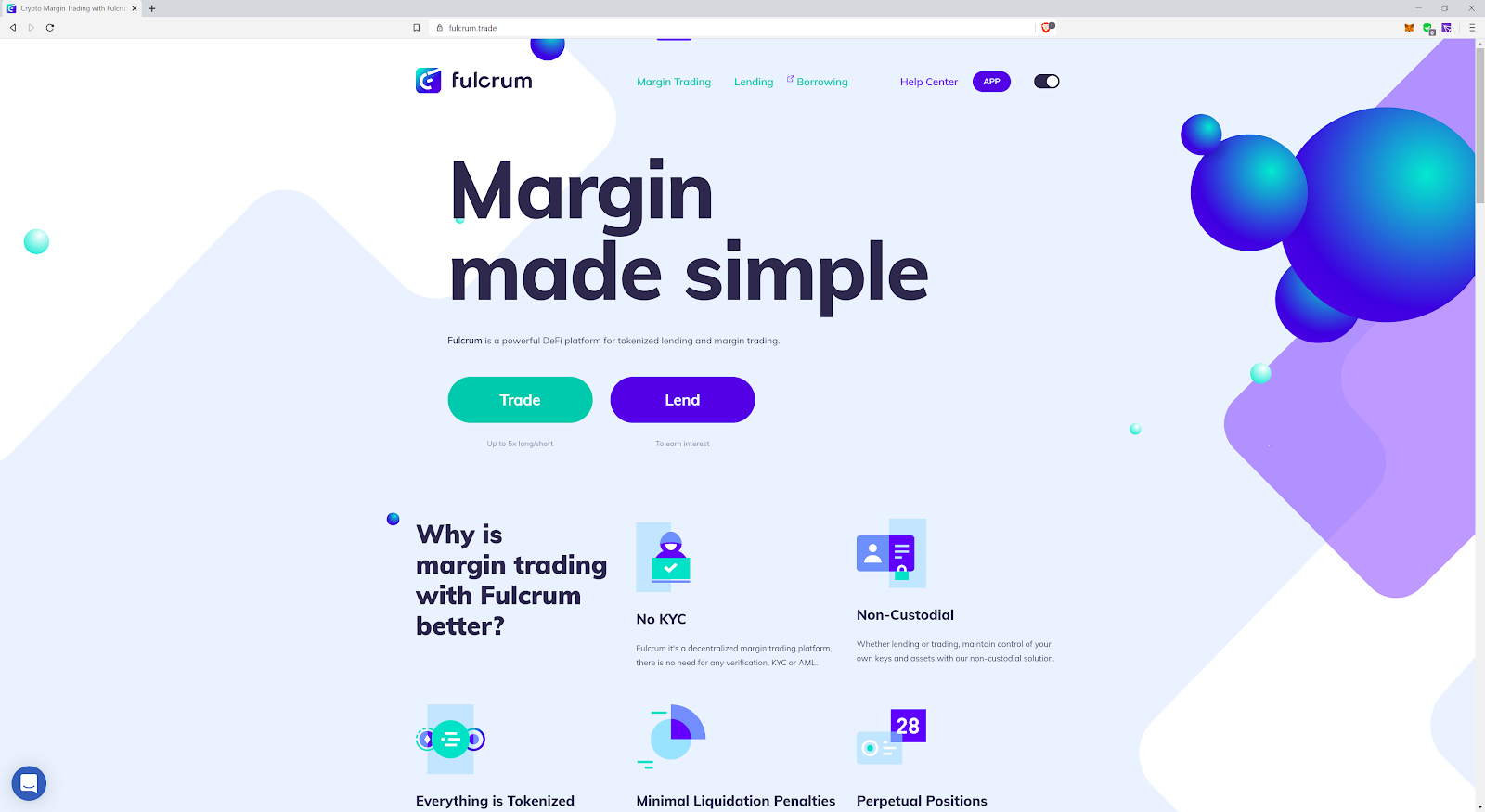 Whether you like the colors or not, I do. Actually, despite its troubles, and color palette,  I think that Fulcrum is pretty cool.

But there are still things to be fixed, such as security. Which brings us further down the page. 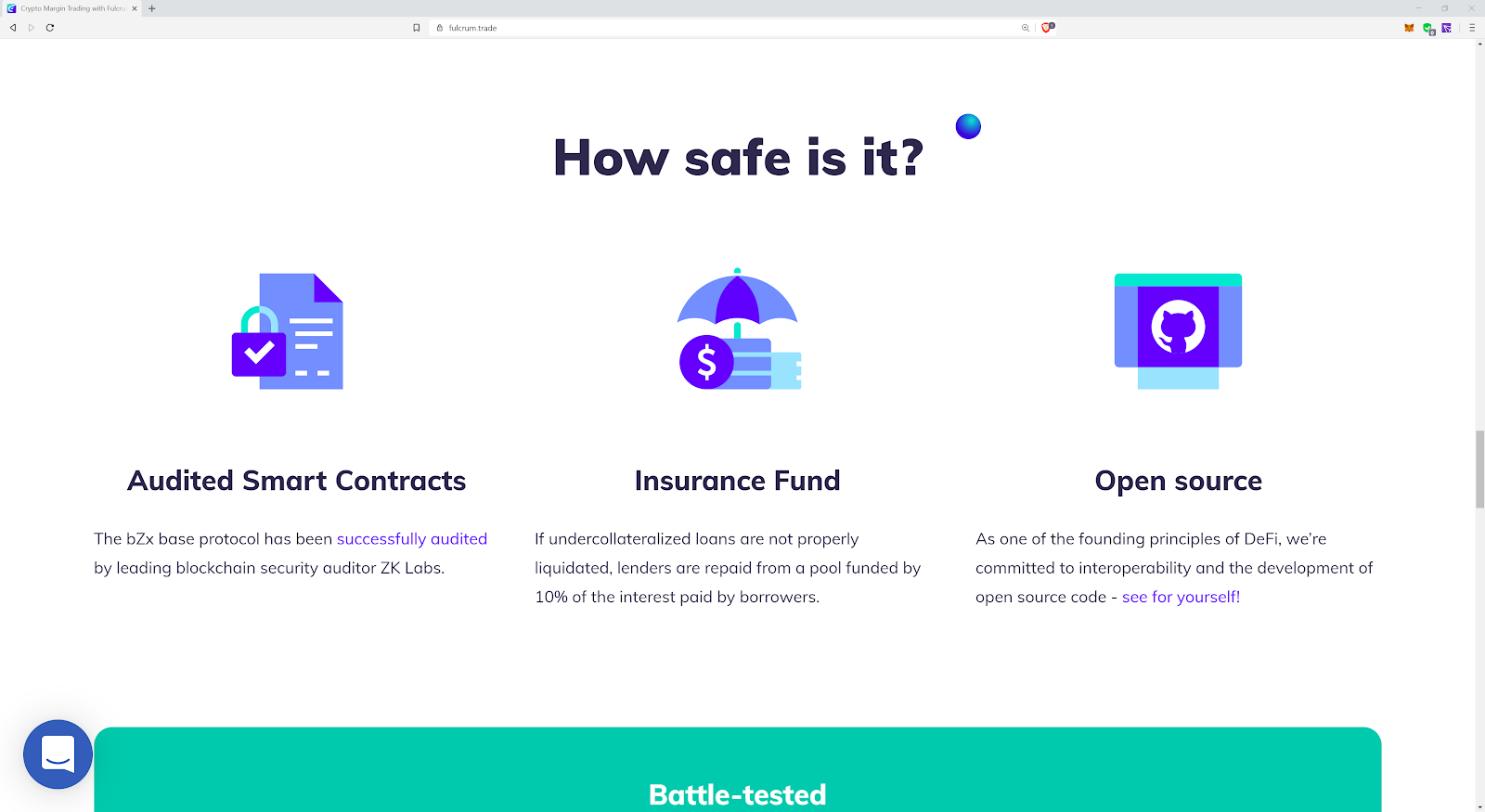 Moving along, let’s try to lend some money. Since the Flash Loaner hit Fulcrum, rates have been all over the place—for good reason. Let’s see if we can beat the odds though and get some of that sweet, sweet 42% interest. 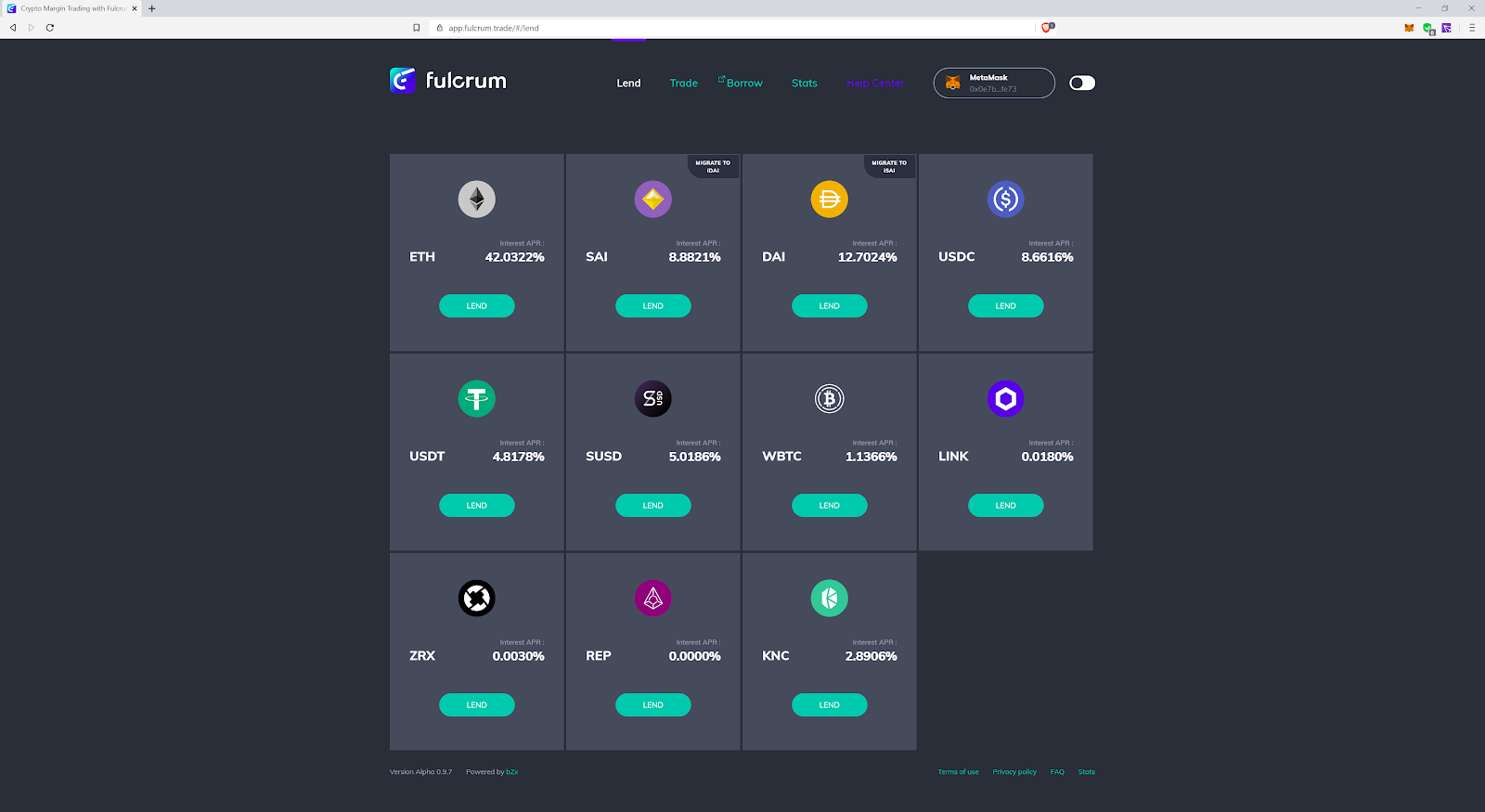 Good question and a tough one to answer.  But effectively, despite the attacks, there are people still borrowing ETH on Fulcrum. And while the team shores up the platform it may be trickier for them to stop borrowing. There also aren’t a lot of people lending which makes the revenue from their borrowing go a long way. Supply and demand, you know? 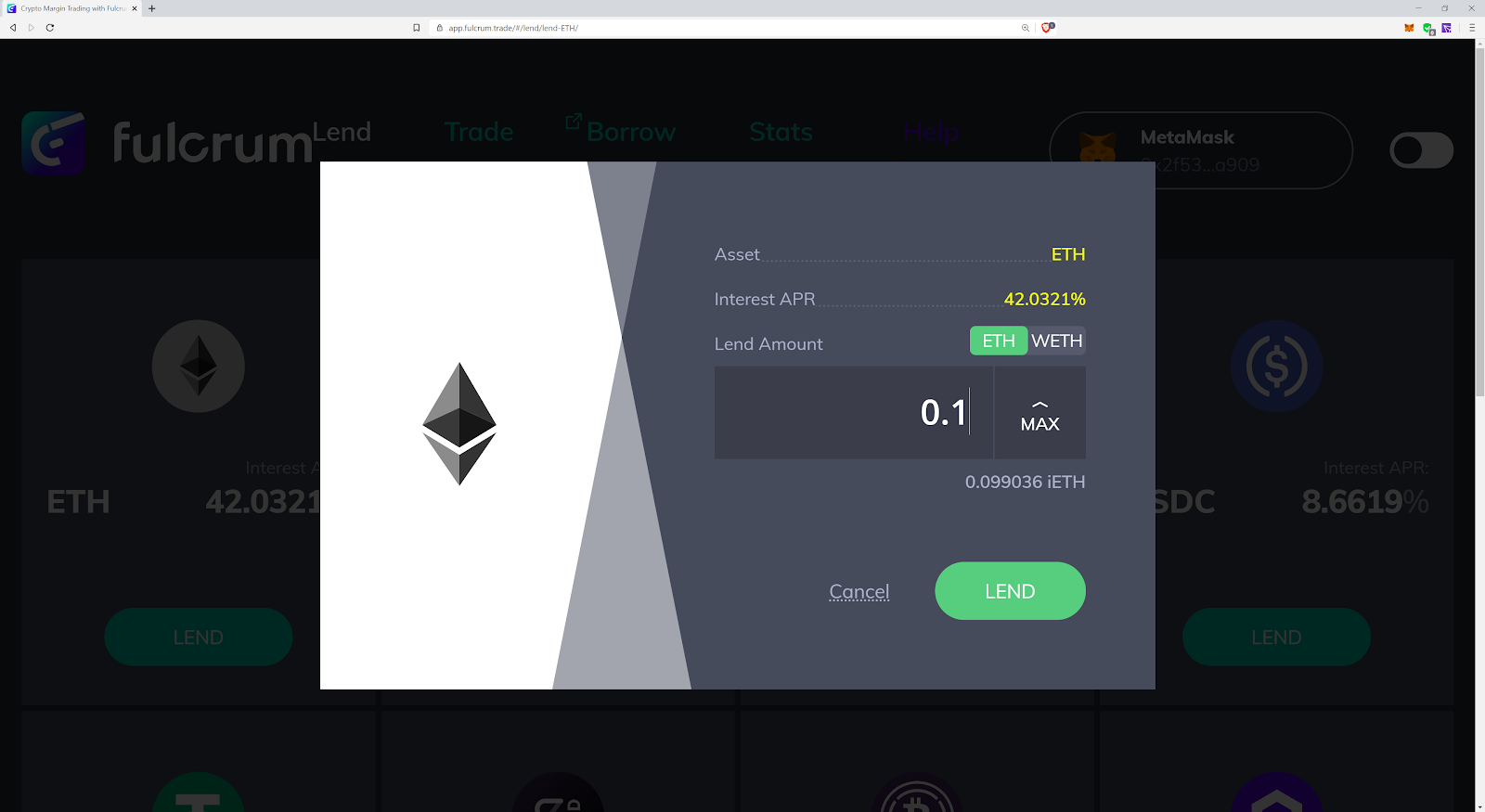 It takes a few minutes to confirm everything on the Ethereum blockchain... and... we’re good! 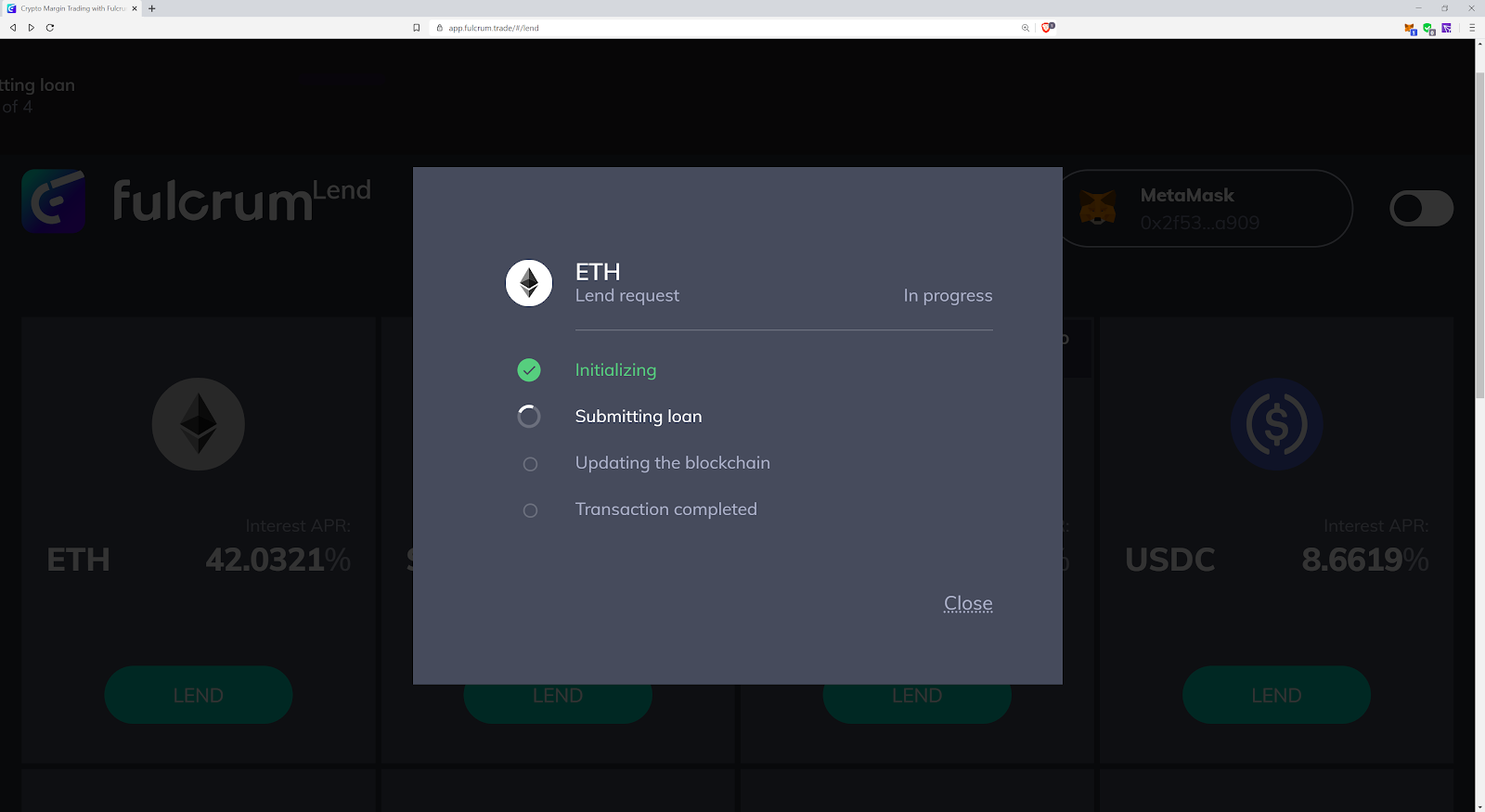 Because I often complain about lack of light mode on these (really for no good reason), let’s just demonstrate that Fulcrum has a nice toggle to show it. 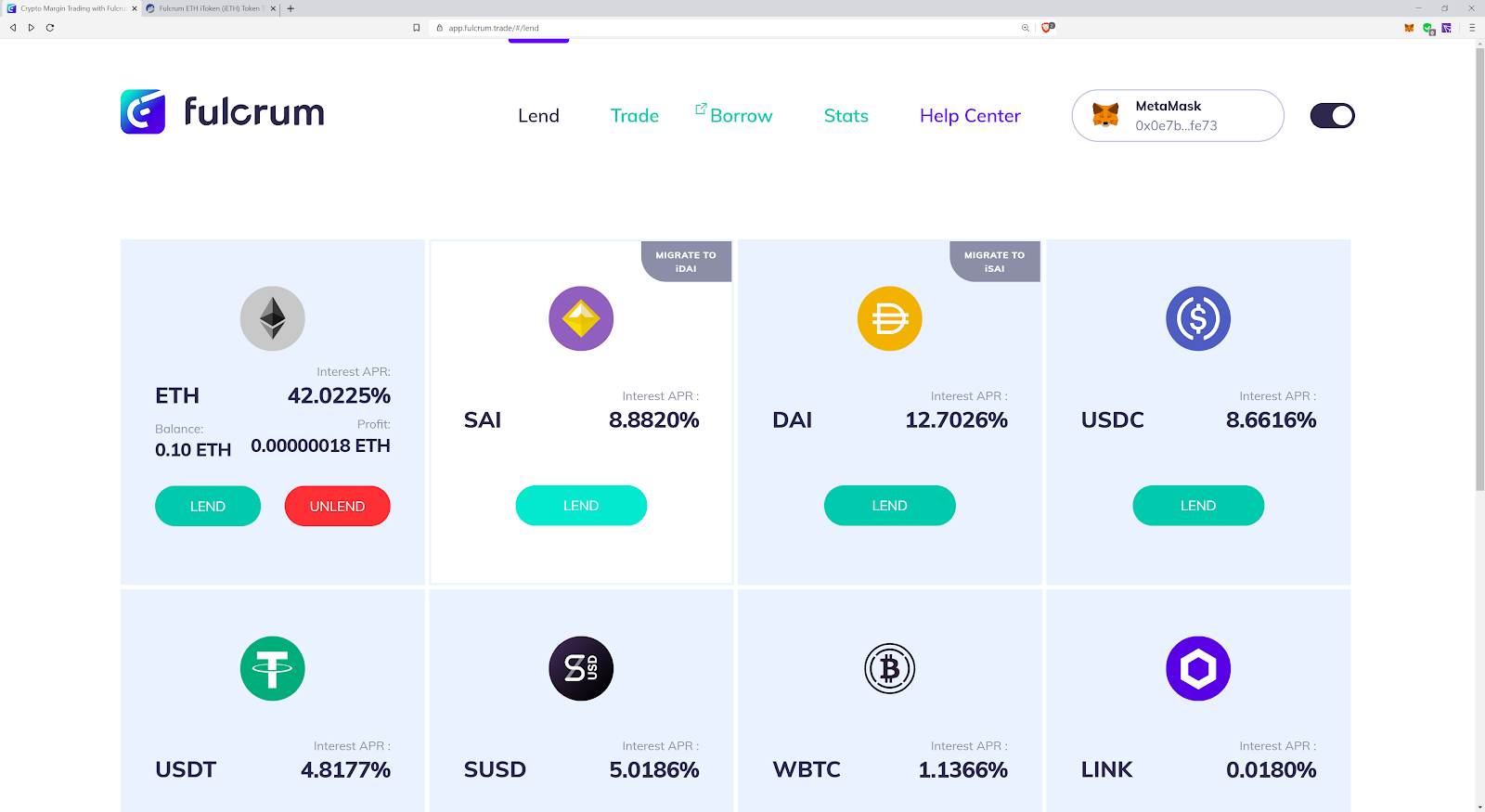 You can see the interest rate running up in real time, and withdraw whenever. Pretty simple, pretty cool.

I know what you’re saying. “42% interest, shut up and take my money!” Before going all in there buckeroo, there is a reason that the rates are high, hint: it’s because the risk is really high.

A view from Etherscan.io

Remember I said that the loan itself has a token, and that it earns interest?

Now that I made an ETH loan on Fulcrum, I can see that token in my wallet. They denote it “iETH,” guessing the “i” is for interest. Either way, I can trade and send this just like ETH or DAI. Why is this useful?

As you can see, people can trade these things directly on DEXs, in this case on Uniswap. That is helpful if, for instance, you want to earn interest on your idle ETH hodlings, and then decide to trade that directly for DAI, without having to unlend the ETH and then trade for DAI.

Also note that while I put in 0.10 ETH, I have less than 0.10 iETH. There is a ratio that started at 1 ETH = 1 iETH, but as interest gets paid (accrues) this ratio drops. Meaning that I get less iETH over time for each ETH, said otherwise my iETH should be worth more ETH over time. That’s actually pretty cool.

In conclusion, the ideas and models that Fulcrum and the bZx team have developed are fairly elegant.

I see them as an interesting prototype for how more advanced systems might evolve should DeFi and tokens become more widely used. There are still a million questions, notably around security, that will determine if bZx and Fulcrum are themselves successful. But hey, innovation is messy, and in DeFi that messy innovation may mean you lose some of your magical internet money along the way.

But at least it’s on a pretty platform in this case.

To the risks involved? I say: