The bank is confident that digital assets have the potential to replace cash, predicting that crypto wallet users will reach 200 million by 2030.

Deutsche Bank has published a new research paper on the future of payments, in which it compares the growth of blockchain wallet users to the early-stage evolution of the Internet.

According to the research paper, titled Digital Currencies: the Ultimate Hard Power Tool, blockchain’s adoption rate mirrors that of the Internet in its early years—although its actual user numbers are an order of magnitude smaller. 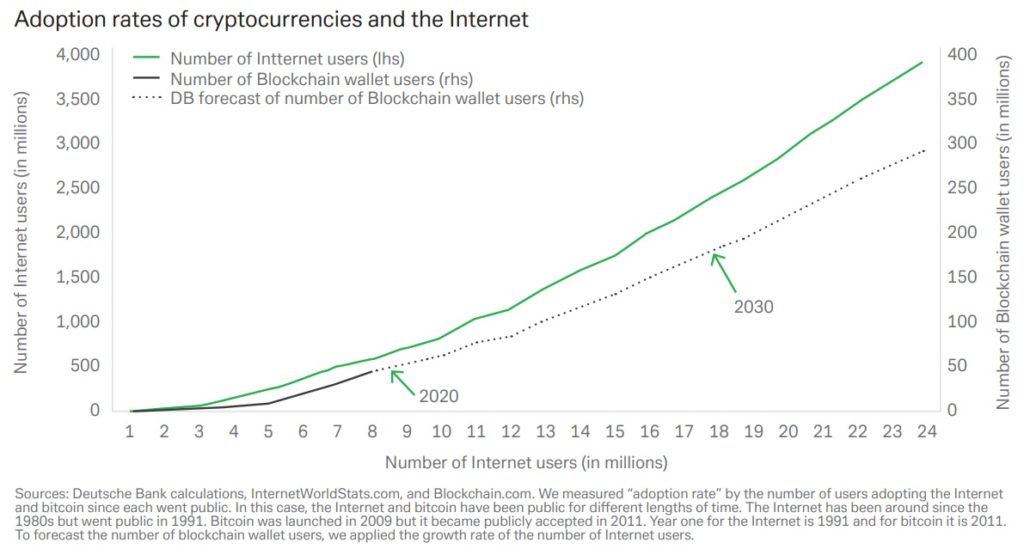 As Deutsche Bank’s chart illustrates, the Internet saw around 500 million users after eight years of its existence, yet cryptocurrency adoption numbers are roughly ten times smaller during the same timeframe—approximately 50 million. This 10x difference will remain steady for the foreseeable future, according to Deutsche Bank.

While the Internet reached around four billion people in less than 25 years, the bank predicts that crypto adoption will encompass approximately 300 million users at that point in its history.

The overall tone of Deutsche Bank’s report is optimistic, with the authors envisioning “a near future in which cryptocurrencies gain broad acceptance.”

Despite the fact that relatively few people have bought and sold cryptocurrencies, the report predicts that if current trends continue, there could be 200 million blockchain wallet users by 2030.

However, for today’s adoption rates to change, a catalyst is necessary; the report suggests that if “the Chinese government, along with Google, Amazon, Facebook, or Apple (the so-called GAFA group), or a Chinese company like Tencent can overcome some of the barriers to cryptocurrencies, then cryptocurrencies could become more appealing.” This, it suggests, will hasten the adoption of cryptocurrencies and “give them the potential to replace cash.”

Deutsche Bank’s sentiment is echoed by other researchers. According to a recent report by market intelligence and advisory firm Mordor Intelligence, the market for crypto hardware wallets is expected to grow at a rate of 24.93% over the next five years, reaching $708.37 million by 2025. That’s backed up by a recent report from P&S Intelligence, which found that the projected market for crypto devices, including hardware wallets and blockchain smartphones, will hit $23.5 billion by 2030, a whopping 7,700% rise.