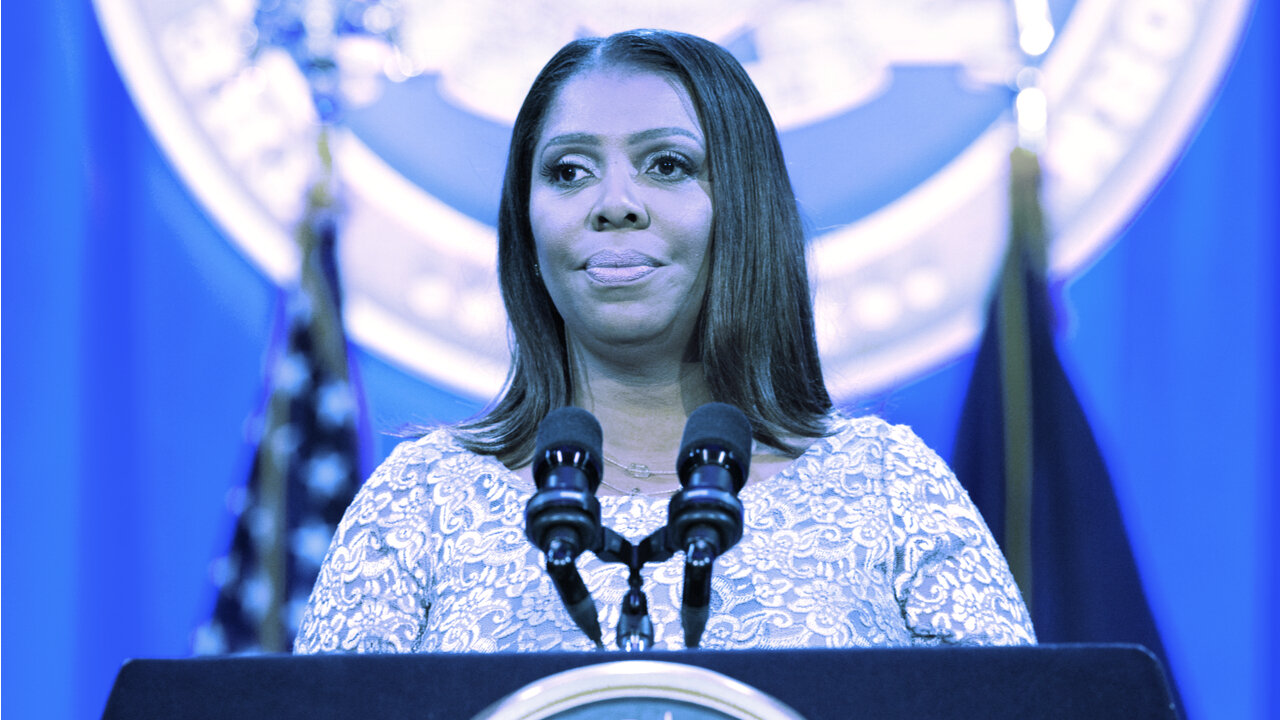 New York Attorney General Letitia James today ordered two “unregistered crypto lending platforms” in the state to cease all operations, while demanding that three others hand over information about their operations to her office.

“Cryptocurrency platforms must follow the law, just like everyone else, which is why we are now directing two crypto companies to shut down and forcing three more to answer questions immediately,” James said in a press release.

The New York Attorney General did not name the crypto lenders in the release, and the names of the companies were redacted in the accompanying letters. However, one of the letters bears the filename “Nexo Letter” while the other is called “Celsius Letter,” suggesting that Nexo and Celisus Network are two of the companies being targeted by the NYAG. At the moment, it remains unclear which other three crypto lenders are being investigated.

Representatives for Celsius did not immediately respond to Decrypt's request for comment. A spokesperson for Nexo told Decrypt: "Nexo is not offering its Earn Product and Exchange in New York, so it makes little sense to be receiving a C&D for something we are not offering in NY anyway. But we will engage with the NY AG as this is a clear case of mixing up the letter’s recipients. We use IP-based geoblocking."

Nevertheless, the NYAG today said that the "virtual currency lending products at issue in today’s actions promise a fixed or variable rate of return to investors, and claim to deliver those returns by, among other things, trading with, or further lending those virtual assets."

The NYAG said that these platforms offer “interest-bearing accounts” and, as such, fall into the category of securities, according to New York’s Martin Act. Passed in 1921, the Martin Act gives the NYAG broad powers to investigate alleged securities fraud.

Today’s announcement indicates that these firms are offering securities without registering with the Office of the Attorney General.

Both BlockFi and Celsius, two popular crypto lending and borrowing services, have both borne the brunt of recent regulatory crackdowns.

The states of New Jersey and Alabama have each also filed cease and desist orders against Celsius. The Texas State Securities Board has also ordered Celsius to appear for an administrative hearing in February next year.

BlockFi has faced similar challenges. Regulators in the states of New Jersey, Texas, Vermont, and Kentucky all filed cease and desist orders against the company earlier this year. The state of Alabama has issued a show cause order against BlockFi as well.

Though the NYAG may be lagging behind regulators in other states in actions taken against these companies, this isn’t Letitia James’s first run-in with a crypto company.

James led a two-year investigation into the stablecoin provider Tether and crypto exchange Bitfinex for allegedly covering up losses of roughly $850 million.

In February, the two companies were ordered to halt operations in the state of New York.

At that time, James said, “We're ending Bitfinex and Tether's virtual currency trading in New York after the companies covered up about $850 million in losses around the globe and deceived the market by overstating reserves.”

Editor's note: This story was updated after publication to include comments from Nexo and to provide additional details about previous enforcement actions taken against crypto lending companies.