"The great thing about markets is that, in the long run, the market kind of dictates the truth," says the early Coinbase employee turned VC. 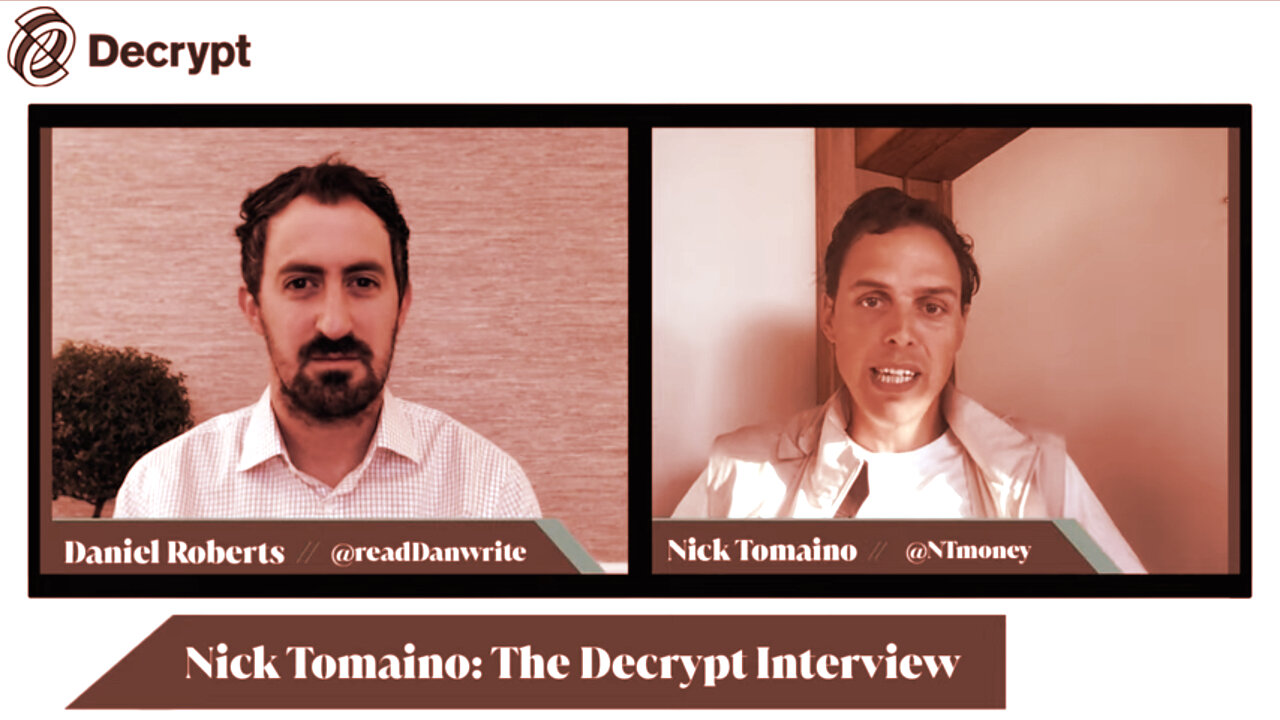 Nick Tomaino is the founder of 1confirmation. Image: Decrypt

OpenSea has seen more than $7.2 billion in trades this year. It's hard to keep track of what inning of NFT mania we're in now, but like many topics in crypto, the view that people have tends to fit what they've already decided they believe: People who think NFTs are a cash-grab gimmick ("There, I just right-clicked and saved the image, now I own it too") point to every decline in volume as evidence that the bubble popped; believers keep on believing.

That's how Nick Tomaino, one of the earliest cheerleaders of NFT art, frames the whole movement. Tomaino was an early Coinbase employee, then left to start his own crypto VC firm 1confirmation, which invested in OpenSea's 2018 seed round and has invested in SuperRare (he's on its board).

"When talking to skeptics, what I talk about is this idea of value being equal to belief," he told Decrypt in an interview last week. "The institutional establishment over the past hundred years has basically said what makes something valuable: a stock has cash flows, or a house has the ability for you to live in it and use it," he says.

"But I think what's happened in the past year or so, with meme stocks, meme cryptocurrencies, and NFTs, is that random people on the internet don't really care what the institutional establishment says is valuable. If the collective group of people on the internet believes something has value, it has value. If you are still someone that's looking for these institutional signals to tell you what has value, you're probably not understanding it. We are in a world where belief equals value," says Tomaino.

Cryptoland arguably has elements of a religion. And if value in crypto is determined by group belief, Tomaino is a proud NFT believer. But he also happily acknowledges that for NFTs to truly go mainstream and attract newcomers, the platforms and services need to greatly reduce the friction in the user experience—if they ever can.

"It's not an easy experience," he says. "Part of that is what makes it fun, though. You have to have a certain level of curiosity in playing a game and figuring it out. For many years, people have been looking for this silver bullet of an increase and improvement in user experience, and it hasn't really come, but more and more people around the world are just becoming more curious and interested in playing the game. And that's really what I encourage people to do. There might not ever be this silver bullet."

One of the newer projects in the space that markets its lack of friction is Solana, the red-hot smart contracts blockchain. Its adherents rave that it's faster and cheaper than top-dog NFT and dapp network Ethereum.

Tomaino isn't impressed with Solana just yet. "Where I would be a bit more skeptical of things like Solana is that I haven't really seen anything new that's really pushing the space forward," Tomaino says. "If you look at Solana right now and NFTs on Solana, you have SolPunks or whatever, you have Sol Apes, all of these variants of things that are on Ethereum. And that's great, because it's bringing new people in, but these things can be fleeting... When you see so much noise around something in the short term, and you don't see any true innovation there, it can be a good time to be a bit skeptical."

It's tempting to conclude from that take that Tomaino sounds like a Bitcoin maximalist, but his fund holds Bitcoin, Ethereum, Polkadot (DOT), Maker (MKR), Cosmos (ATOM), Basic Attention Token (BAT) and others. And he proudly points out that since 2017, his diversified fund has far outperformed just holding Bitcoin.

Still, even in the multi-chain and multi-coin landscape of 2021, Bitcoin and Ethereum maximalists are out there—and there's that concept again of faith in crypto.

"If you believe something has value, you can meme it to having a lot of value, and a lot of the Bitcoin maximalists truly believe that Bitcoin is the only thing that's valuable," Tomaino says. "And who am I to take that away from them? I have a different belief. And I think the great thing about markets is that, in the long run, the market kind of dictates the truth, right?" he says.

"I used to be a Bitcoin maximalist. At Coinbase, in 2013, we were Bitcoin maximalists. And over time, when we saw real innovations that were pushing the whole industry forward and bringing new people into cryptocurrency, that's what we ultimately cared about, and so we adjusted," says Tomaino. "People can be loud on social media and stuff, but ultimately the market is my favorite source of truth."