Amid Internet outages, savvy Belarusians have found alternative ways to access information and communicate about the protests engulfing their country. 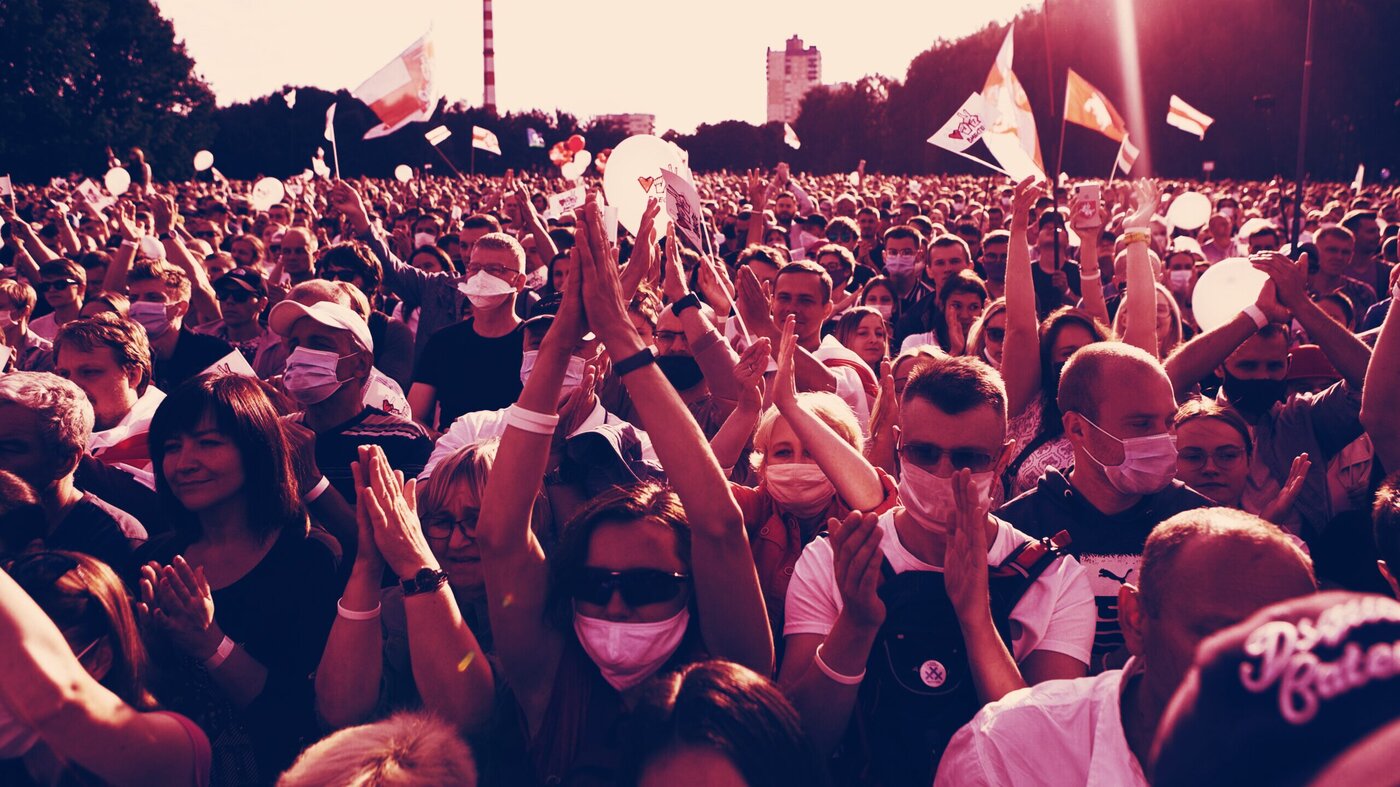 Protests against the Belarus government have turned nasty in recent days. Image: Shutterstock

Privacy browser Tor has seen a surge of activity from Belarus, where thousands took to the streets for the third night running on Tuesday, while police responded with live ammunition.

Internet connectivity and cellular service have been down in this eastern European nation since Sunday evening. The blackout is widely believed to be government-imposed—a result of widespread social unrest after a controversial presidential election saw “Europe’s last dictator” Aleksandr Lukashenko re-elected.

“The governmental monopoly on Internet connection sucks, because huge amounts of people in the country were totally disconnected,” Kiryl Laptanovich, a software developer working in Belarus, told Decrypt.

But savvy Belarusians have found ways around the outages. As well as using Tor as a bridge to access Internet services, locals have turned to virtual private networks (VPNs), the Telegram messenger app (which has been intermittently available), and Canadian proxy service Psiphon.

From near zero, last Saturday, use of the proxy service has surged to 12.42 million connections from Belarus, and the country now leads the world in Psiphon use.

Telegram is a popular coordination tool among protesters worldwide, and Belarus has proved no exception. People, unable to reach one another, have relied on popular bloggers and Telegram news channels. Over one million people now subscribe to NEXTA, which posts updates of protest activity and describes itself as “a decentralised media organisation of the 21st century.”

Some, alert to the threat of an Internet shutdown after Sunday’s election, made early provision.

Laptanovich works with a developer team called CyberCongress, which is creating decentralized search on top of Cosmos blockchain. The team made preparations for the outages over the weekend.

“We have redelegated the biggest part of the stake out from the country to foreign nodes to make our chain more sustainable and resistant,” the developers tweeted on Sunday.

As of 9th of August, due to presidential elections in Belarus, where most of our dev team is based, we expect severe internet cuts in the country, today, tomorrow and, only Satoshi knows, for how long.

As result part of our team might become unavailable, here or...

Currently, most Belarusian developers are using a VPN, which has been working, said Laptanovich. If the Internet outages continue, he’s considering using a mesh network. These are made up of nodes that can send and receive messages and connect directly to one another. The most popular, goTenna, uses ultra-high radio frequencies.

In case of a total Internet shutdown, only access to satellite internet is available, or custom-designed connection routes via neighboring countries using mobile service and WiFi. But the former is expensive and the latter requires some tech skills.

So, families and groups have been pooling together to create initiatives to unlock their Wifi, using wired instead of digital connections, said Laptanovich.

However, a big limitation is the high cost and availability of useful hardware in Belarus. Even an ordinary Raspberry Pi is prohibitively expensive for the average Belorusian and must be ordered from Europe or China.

Laptanovich is concerned about the negative impact on the country’s IT business the Internet shutdown will have. Employing Belarusian software developers has become a popular among US based companies, seeking remote employees.

Experts warn that a centralized infrastructure (as is the case in Belarus) makes it much easier to shut the Internet down—a measure already employed in India, Pakistan, Turkey and other countries at times of civil unrest.

Lukashenko has denied responsibility for pulling the plug on the Internet. Instead, he’s blamed the outages on distributed denial-of-service (DDoS) attacks from abroad, without presenting evidence.

“The policy of internet shutdowns is gaining popularity around the world," Lukasz Olejnik, an independent cybersecurity researcher and consultant told Wired.

The Internet partially came back to Belarus, at 8AM. Major social networks and messengers are connecting again. It looks like authorities want people to know about the unprecedented police brutality last night. Most news websites are still blocked.

But, Belarus-based journalist, Franak Viačorka reported that some Internet activity had been restored—but not access to news sites. “It looks like authorities want people to know about the unprecedented police brutality last night,” he tweeted.