Metrics across the board for the new liquidity and asset management protocol spiked since its launch last month.

Balancer Labs’s so-called liquidity mining program is proving tokenized incentives can be huge drivers for growth. Metrics across the board for the new liquidity and asset management protocol spiked since the launch of the token-based incentives program.

Balancer launched three months ago promising substantial improvements over its main competitor Uniswap. Still, there was minimal daily volume —$63K on average— one to two months since it opened for trading.

On May 15, Balancer Labs proposed the initial framework for liquidity mining, in which liquidity providers would receive BAL tokens in return. But not much happened. Volumes and liquidity remained stagnant. The protocol wasn’t planning on distributing tokens retroactively for those who participated before its mainnet launch, so there was no incentive to add liquidity yet.

Balancer’s daily volume surged to $1.23M from ~$129k on the day of launch. Since then, the protocol has averaged ~$708k in 24H volume over the past two weeks, a 670% increase compared to last month’s average. While this growth is a positive signal for the future of Balancer, it still pales in comparison to Uniswap where daily volumes are over $10M. 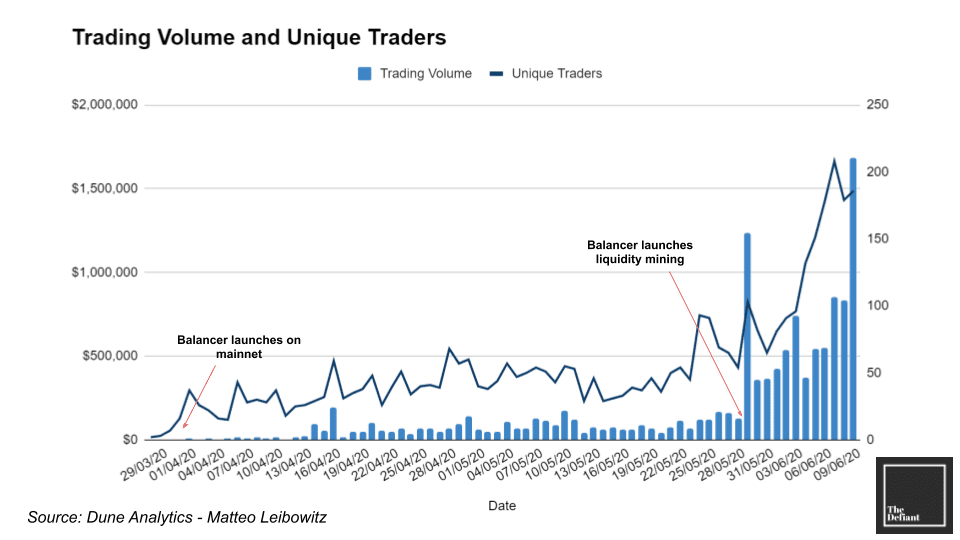 Naturally with the increase in volumes, Balancer’s liquidity provider (LP) revenues also reached all time highs as cumulative revenue went near-parabolic. Prior to launching the incentive program, daily revenues across all LPs averaged only $438. Post-liquidity mining and this number swelled by 3.6x to an average of $2,019 per day.

On an annualized basis, this results in an estimated $736k in earnings for Balancer liquidity providers over the course of the next year. Again, while this growth is impressive, Balancer still has some distance to go before competing with Uniswap where liquidity provider revenues are on track to earn 2x more at $1.6M this year as of writing.

After launching its native token, nearly every fundamental metric for Balancer went up as DeFi users flocked to the protocol. It’s become clear that tokenized incentives can put emerging protocols on steroids.

That’s not to say a token is necessary for driving growth. While Maker, Aave and others were already embedded with native tokens, Compound and Uniswap have successfully been able to bootstrap sizable networks sans token. All they provided was (really) good technology for the DeFi ecosystem.

But the strategy is also effective for untokenized protocols. Compound, which is following a similar token distribution model as Balancer, is a perfect example. In the coming weeks, COMP tokens will be distributed to users who borrow or supply capital to the protocol. The incentive design will likely drive more usage to the protocol as new users flood Compound’s money markets with capital in an effort to get their hands on COMP - likely to speculate on their future value.

Compound’s token distribution is set to begin on June 15th. If history serves us well, we may see the new tokenized incentives act as a similar catalyst for growth.

The key difference? Compound has a head start with $100M in value locked and over $1.5B in cumulative deposits.