That's nearly 10 times more than there were Internet users in 1995, and a key metric indicating how big DeFi can get.

The number of Ethereum addresses just crossed 100 million. Even when slicing that number up to account for actual activity, all metrics point to accelerating growth and adoption that’s beating even early Internet use.

This is relevant for DeFi, because what’s the use of rebuilding the financial system if no-one is there to use it? Since most of DeFi is built on Ethereum, the number of people using the Ethereum network is a key metric to gauge how big open finance can actually get.

There are different ways to measure Ethereum use —total addresses, transactions per day, new addresses per day, etc. The most recent milestone was in in total cumulative unique Ethereum addresses crossing 100 million.

But it needs to be taken with a grain of salt, as one person can have multiple addresses, some of them long forgotten, and in other cases, they could have been created automatically by trading bots.

Total Ethereum addresses with non-zero balance is a good metric to add context, as it signals actual use, and this number is approaching 40 million. The daily growth of this metric is accelerating, with new Ethereum addresses holding ETH just crossing 100k, according to Glassnode, the highest since March 2018 using a 30-day average. 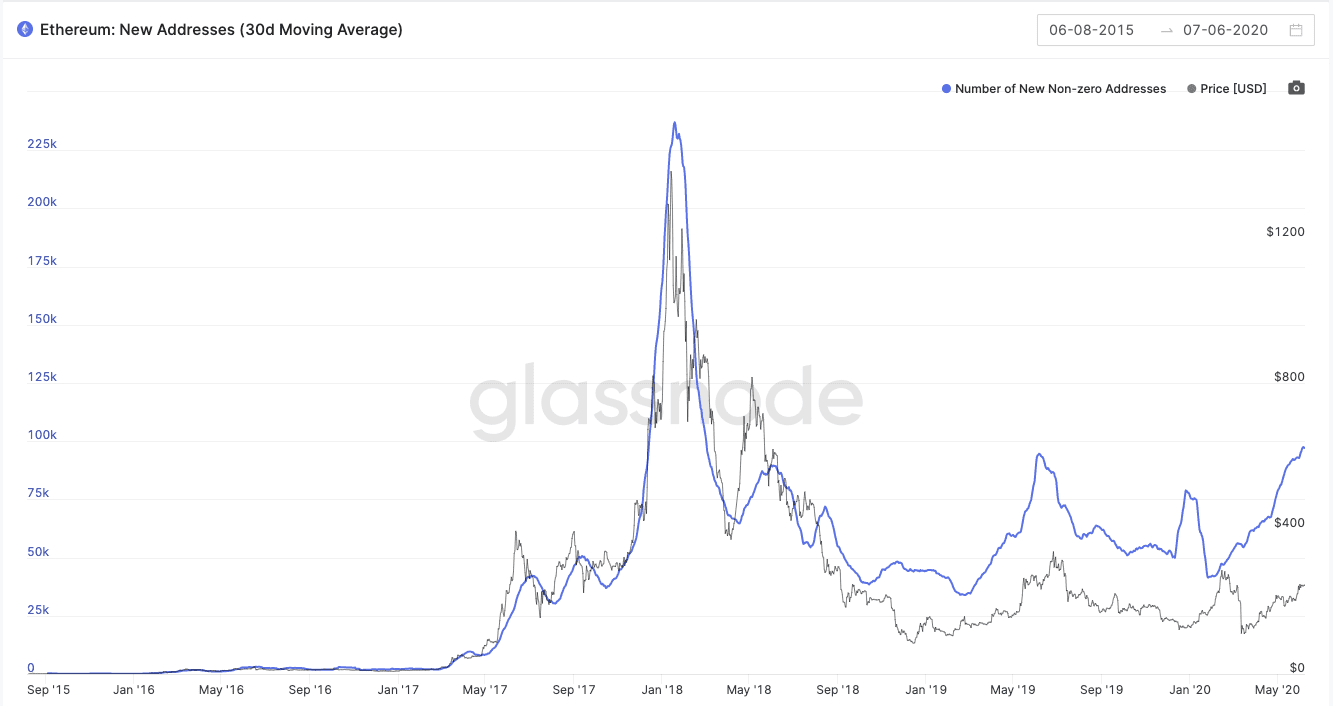 Daily active addresses are also climbing. They spiked near 400k last week, while the 14-day average is at more than 340k, the highest since August 2018. Glassnode counts this metric as addresses which either sent or received funds, successfully.

Still, this shows the number of addresses merely holding ETH (40 million) is more than 100 times larger than addresses actually doing something with that ETH.

Smoothing out sharp spikes with the 7-day moving average, the only two times transactions have climbed to these levels were in June 2019 and at the peak of the latest crypto bubble, when they touched a high of 1.2 million in January 2018.

Summarizing, here’s a glimpse of DeFi’s addressable market on the Ethereum network:

DeFi's slice of the Ethereum pie

So what chunk of that is DeFi currently taking? Richard Chen of 1confirmation added cumulative users for major DeFi platforms using Dune Analytics data, and he arrived at almost 200k total DeFi users over time.

The numbers show there’s still ample room for decentralized finance to grow just within its natural playground of Ethereum users. In other words, Ethereum adoption isn’t limiting DeFi adoption yet as it’s only attracted a sliver of that market.

Ethereum adoption itself has a lot of room to grow. Its 40 million addresses holding ETH compare with more than 60 million Bank of America accounts. And that’s just one US bank, while Ethereum wants to become a global settlement platform.

But the network is off to a great start. Ethereum users have already surpassed total early internet users, with 100 million addresses five years since its launch in 2015. There were 16 million total internet users in 1995, six years after the World Wide Web was founded in 1989, according to Internet World Stats. Even taking the more conservative metric of 40 million addresses holding ETH, Ethereum is beating early internet adoption.

It’s only been five years and we have a budding, emerging, innovative financial system. Imagine what the next five years will look like.