John McAfee wants to be president. Meet his enablers

Ex-millionaire software tycoon John McAfee makes Trump look like a parish priest. Meet the “team” who could make him president. 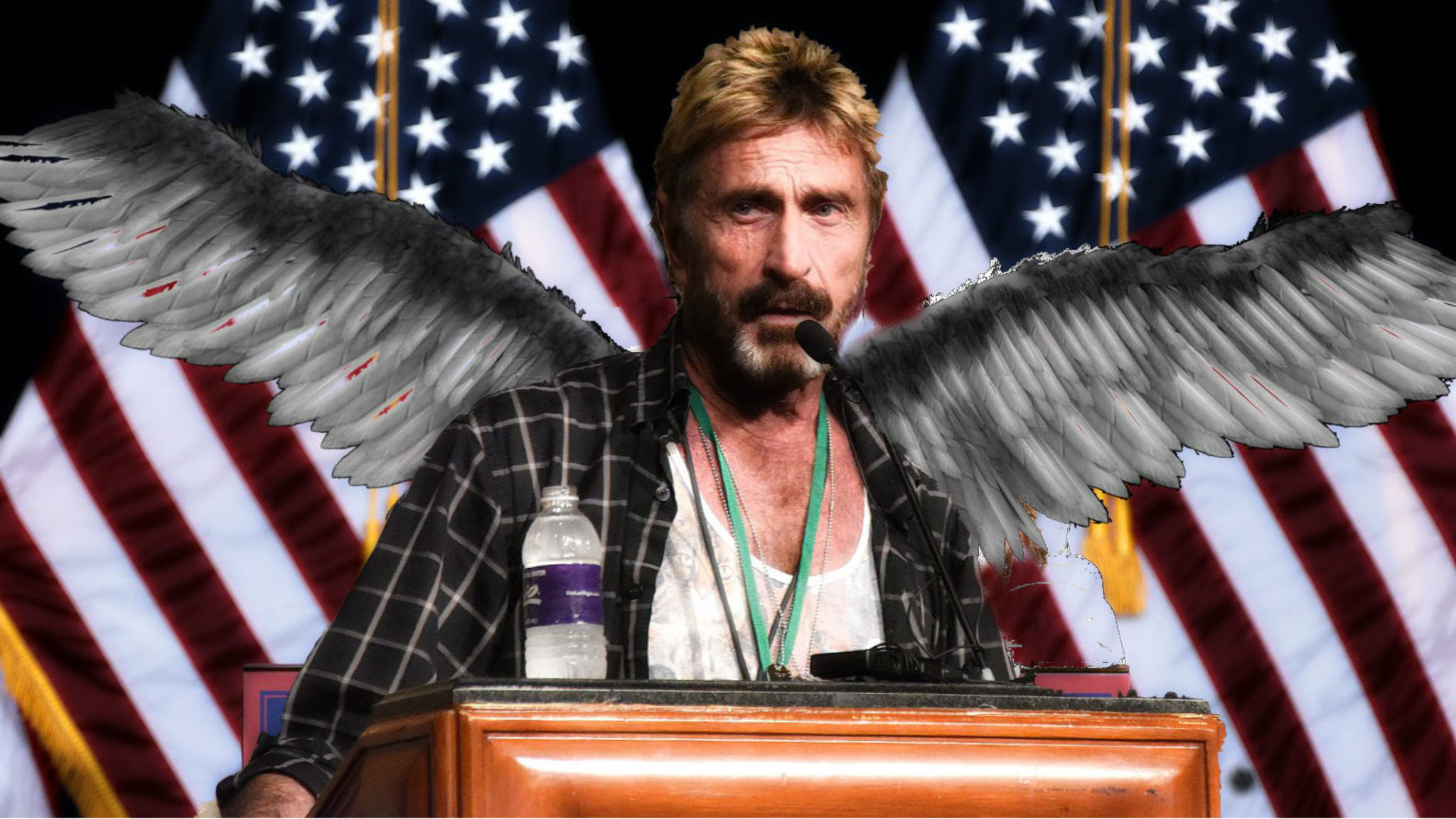 John McAfee is yet again in exile. He has just released a video of himself, moments ago, steaming away from a port unknown, one step ahead of the law.  He says this is no surprise, given his refusal to pay taxes for the past year. Indeed, one of the planks of his presidential campaign is that taxation is theft.

"I am running my campaign in exile on this boat for the duration," he vowed, the mainland receding quickly behind him. “Obviously I am in flight. Today, crypto community, we are at war. And I am on the frontlines.”

This is, of course, an unsurprising development in McAfee’s 2020 presidential campaign, the slogan of which—”Don’t Vote McAfee”—is already proving to be wise advice indeed.

Even so, McAfee, 73, is the embodiment of the American Dream. Just look at the big man’s resume: he was the inventor of the sketchy anti-virus business, making an estimated $100 million before selling it off in 1994. He went on to forage for “natural antibiotics” in Belize, where he was alleged to have murdered his neighbor (which he denies).  He went on the run. He came back to the U.S. He became a one-time purveyor of dodgy penny-stocks, before—of course—settling in as crypto’s incumbent Shill-in-Chief.

He says he makes love to whales and intimates intimate relations with ostriches. Michael Keaton is reportedly playing him in an upcoming Hollywood feature, “King of the Jungle.”

McAfee is America, America on bath salts, America on a naked shooting-spree, America faking its own death to escape law enforcement. So it’s only fitting that this avatar of America’s worst excesses, this bizarre, live-action Reality TV Show of a man, is running for president. He is the natural successor to Donald J. Trump.

Needless to say, McAfee’s vaguely Libertarian campaign message—something about cryptocurrencies, the unfairness of taxation and legalizing drugs—is now being dutifully inflicted on the public by his acolytes. But what kind of people would want to sell this flim-flam? (According to McAfee's video, the Government wants  to know the same thing and is investigating four, unnamed campaign workers.)

I was determined to find out.

John McAfee’s “campaign” is, of course, absurd, and has so far largely been confined to the dullard-infested backwaters of an official Discord group. Which is where the team hangs out, like hare krishnas in an airport, diligently flogging their master’s Presidential Sales Pitch.

Most presidential candidates vie for the attention of their chosen parties, lather up PACs in birch-paneled boardrooms, and occasionally descend to Earth to commune at arm’s length with the Common Man. The McAfee campaign, on the other hand, is managed almost entirely through bilge-infested social media channels, sold wholesale through memes, and is utterly absurd in its execution.

As one supporter, who told me his name was "Dylan," explains via Discord, McAfee's awfulness is his strength. “When the documented rumors about you are that you shoot your neighbors and have women poop in your mouth through a hammock, there is not much a political opponent can do.”

Among the few hundred gun-toting crazies, Nazis, Commies, degenerates and con artists occupying the McAfee campaign’s official Discord channel, I found three people who appeared to be above the rabble, and have quasi official roles in McAfee 2020. Sadly, the first, the elegantly eye-patched Rob Loggia, didn’t respond. Disturbingly, the second two did.

Zoe Yung is the campaign’s “Director of Youth Engagement,” which sounds like something from the Third Reich. She is tasked with completing whichever febrile ideas spring from McAfee’s mind. “My responsibilities are vague,” she tells me. “I'm basically just a sort of connection with young people. He occasionally gives me tasks and says things he wants and I try to make those happen.”

“Things” is a rather grandiose term for what she’s accomplished so far. Since she started working on the campaign, she said, she’s gotten McAfee on a “number of podcasts,” persuaded him to (partially) use an anime Twitter avatar, helped him “meme content,” helped popularize his legendary “mixology” videos—in which he posts videos of himself making vile “cocktails” on Twitter—explained to him “slang and other young people stuff,” and “made several future plans for getting at different audiences.”

Meanwhile, Yung can think of exactly zero discernible McAfee policies. But they’ll come, she assured me.

Yung, an Atlanta, GA. resident, joined the campaign by sheer misfortune. “Basically it started as a joke, and I'm honest about that,” she said. “John McAfee is charismatic and eccentric, constantly attracting attention for his misadventures and surreal statements.” Finding this schtick amusing, Yung jokingly tweeted that she should be McAfee’s contact with “the youth.”

“I sent that tweet, muted my phone to watch a movie, and forgot about it,” she recalled. After the film, she returned to her phone to find that McAfee had responded to her, having stalked her tweets. “[He] decided that I knew what I was doing,” said Yung. After phoning the whalophile later that evening, Yung clambered aboard  the “campaign.”

Another of McAfee’s volunteers is Ramona A. Stone, the Vegas-based coordinator of the campaign’s Discord channel, which involves “cleaning up pepe-shaped [sic] stains and misguiding the conversation with Metal Gear Solid references.”

Stone presents as someone suffering from extreme, bewildering paranoia: "I swear to fuck if you're an animal-rights activist attempting to ambush me for the once in a lifetime scoop on whale fucking, John has made his spiritual opinions on this very clear and I do not wish to elaborate," she explained, thoughtfully.

Then she quickly noted that if I was ambushing her on behalf of PETA, she would “vomit with anger.”

I mentioned that I, too, enjoy a nice, consensual roll in the seaweed with a cetacean from time to time, and hunted my own meat for fun. (I didn’t say this, actually.) Still, I was able to calm her down, and slowly, like one of McAfee’s giant-clam paramours, she began to open up. Despite her comms role, it turned out that she had never actually spoken to McAfee, except via Twitter.

“He's even magnetic through text,” she assured me, her leathery-old-man love palpable through the screen. “It’s an honor to extend the reach of his light.”

To attain her rank, Stone “wormed [her] way up the social ladder with enthusiasm and charisma along with a sense of absolute trustworthiness and an almost infallible purity.”

I spoke to the abrasive Stone for some time. She’s probably not really an extreme paranoid—her constant defensiveness was, perhaps, just a joke. But her repeated threats to “vomit with anger” in the event of an unfair write-up, which this certainly is, put me on edge. How many of McAfee’s vast resources did she have at her disposal? I kept a few safe tabs open—Facebook, Reddit, my fave crypto third-party aggregator, The_Block—for a quick escape if things heated up and the psychos doxxed me or came by my flat with a baseball bat or whale gaffe.

Turns out I overestimated Stone’s power. Yes, she edits my Discord name to “PIG FUCKING PRESS VOMIT” when I’m called out for spamming each member of the channel with the same lame introductory message. But who among us wouldn’t do the same?

Besides, while other, more professionally run outfits might eject me for my sleaze, the McAfee clan couldn’t be bothered. And it’s not as if Stone is getting paid for her work. “This is voluntary darlin',” she points out. “John believes it to be absurd to spend money in order to become a civil servant.” Neither is Trump, supposedly.

Despite the free-flowing chaos of his campaign, John McAfee’s foot persons largely support his message, insofar as that message is, “DO NOT VOTE FOR HIM.” “He's not even trying to win, he states that quite clearly,” insists Yung. “I believe in his platform insofar as it is an attempt to call attention to the absurdity of the current electoral system and powers that be.”

All told, the good people on the McAfee “trail” are more or less fully occupied with the spreading of unflattering misinformation about themselves, their campaign, and their candidate. “I accept nothing but complete actionable fabrications,” said Stone, the Discord manager, when I threatened to quote her accurately. She ranted about the “drug addicts,” “fascists,” and “sleeper agents” that had apparently infiltrated the group, and I realized the extent to which she was willing to baldly lie—or baldly tell the truth—to make her beloved candidate look even worse.

But above all, it turned out, the feeling was one of pride. Finishing up our interview, Stone concluded: “It was a pleasure to serve up the true and final official campaign stance on whale fucking.”

Thus invigorated, I set out to learn more about McAfee’s base.

—NEXT Week: National Affairs Correspondent Ben M talks to (or, more likely, lazily misquotes from the tweets of) McAfee’s “Base.”