China's dForce: A yield aggregator to rule them all?

After suffering a $25 million exploit, DeFi startup dForce has been laying low. Now it's back after an audit, with a DeFi superapp. Will it go stratospheric this time?

dForce is back after being burned during a $25 million exploit.

Can dForce make a comeback?

Along with DeFi hitting a record market cap of 8 billion, DeFiprenuers continue to break the boundary of new experimentation. There seems to be a product going live everyday, as the poem says: “like bamboo shoots after a spring shower” (雨后春笋). Each has its own story and identity. Perhaps, the most eye-catching one is the recent fork of YFI, which gave birth to YFII.

But among the OG protocols that are not the recent bootstrapped kind, one cannot ignore dForce. Earning its notoriety after hackers exploited a vulnerability to the tune of $25 million (and then returned some of the money) dForce has been keeping low-key since April. Now the team has returned with a new upgrade. This week’s da bing examines dForce and explores how the once-tainted project is trying to get back in the game.

Like many DeFi projects, dForce is also playing the aggregator game, giving its users access to other DeFi pools, albeit with some significant differences. DeFi aggregation is an attractive field because unlike most OG DeFi protocols that only support one single stable-asset, a yield aggregator allows users to compare yields on different protocols and choose the one they like the best.

But those types of aggregators are not enough for Mindao Yang, co-founder of dForce. For Yang, there is a big difference between  “aggregation as a service,” such as YFI, and “aggregation as an asset.” The distinction here is that when aggregation is simply a service for people to shop for the highest yield, it doesn’t capture rough value. However, if aggregation becomes an asset protocol, users keep returning and it becomes “a super sticky supernova.”

What Yang means is that a simple DeFi aggregator can be easily replicated (as we have seen with YFII) but is also innately transient. Users can pass on their liquidity to the underlying protocols such as Curve and AAVE ( in the case of YFI) rather than staying loyal to YFI. In other words, YFI is useful but doesn’t capture all the rewards.

dForce took a different approach, one that aims to vertically and horizontally integrate  all DeFi protocols. Its latest product dToken is not simply a wrapper of ERC20 tokens but an asset protocol, which has integrated from both the asset level and the lending/trading level. 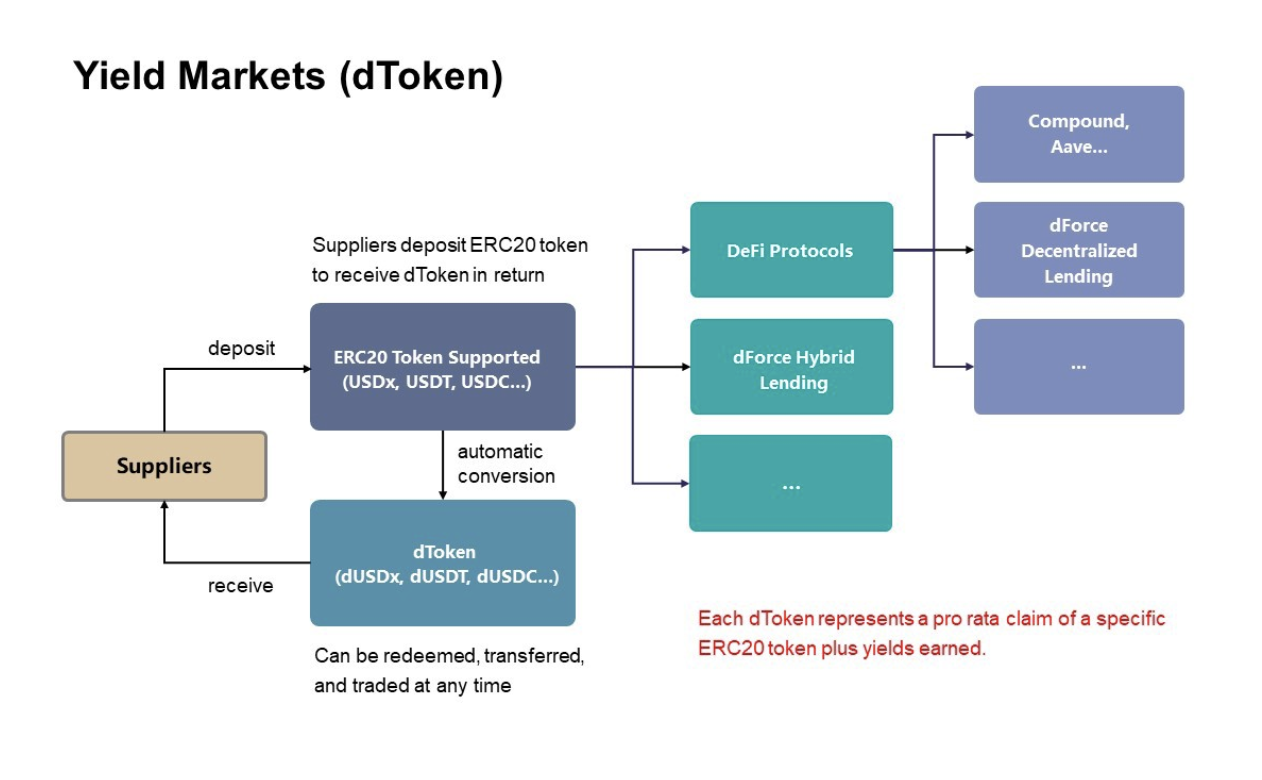 It’s all about user experiences

dForce is trying to provide a solution to people who want to harvest yields, but find it too difficult. Describing dToken’s design as a “liquidity matrix,” Yang believes that dForce will be “the ultimate dispatcher on top of the yield aggregators.”

For example, normally users have to deposit on protocols such as Compound, claim COMP, and then sell the token. With dToken,  users won’t need to conduct all those transactions, nor will they pay expensive gas fees on them. Instead,  the protocol will itself sell COMP into the original stablecoin yield through an internal buffer pool. Similarly, dForce has a set of strategies that will employ its pooled capital both on-chain and off-chain, including rebalancing strategy.

By pooling yields across the DeFi money-lego stacks, dToken unlocks the yield power of all DeFi products, including governance tokens. Just like WeChat, dToken connects users directly to other DeFi protocols, with the condition that they don’t leave the dForce ecosystem.

However, the big elephant in the room still exists. Will dForce be hacked again? Like most software products, especially those in finance, it will almost certainly be targeted. The real question is how much dForce has done to mitigate such risk. While a security audit is a start—dForce had one—the real vulnerability lies in the design on the protocol layer. Most DeFi hacks aren’t simple technical hacks, but exploit financial vulnerability, after all.

“There are many risks in playing the DeFi game, but the industry cannot grow without risk-takers,”  Yang told me. Risk-takers are not only DeFipreneurs, but also yield farmers, liquidity providers, and retail investors. After all, dForce isn’t the only project that’s being hacked, nor will it be the only one. That is part of the game and what makes it addictive. Let’s hope that this time, Yang and his users are the winners.

#1. More financial services for the miners

Miners are “getting serviced”—as we’d say, somewhat saltily, in Chinese—left right and center these days. Babel Finance, a crypto-financial services firm that aspires to be the JP Morgan of crypto, formed a partnership with HashAge and Heng Jia Group to offer “pledge loans” on miners’ rigs. For eligible miners who give the custody of their mining machines to  HashAge and Heng Jia Group, Babel Finance will offer pledge loans, a type of loan that has to be backed with the full amount of collateral. A pool of 50 million USDT for the first round of loans has been prepared.

This is not the first time Babel Finance has immersed itself in the mining community. It started as a lender to Chinese miners, then expanded its business model to include crypto asset management, and applied a traditional, private banking business model to the nascent crypto industry when miners were not yet financially savvy. In recent months, it also got its hands in the pockets of derivative trading and mining.

Babel’s move is aligned with the overall financialization of the mining industry. From borrowing to hedging, miners are slowly catching up on the financial games that have been played thousands of times in the traditional banking sector. The gap between the fiat and crypto worlds is shrinking.

Obviously Babel Finance isn’t the only one eyeing the digital asset management sphere. Huobi, whose tentacles have reached every corner of the crypto world, recently launched its own custody business, serving institutions and high net worth individuals.

But the question is, why are all these players vying to be asset managers. And why now?

As the crypto industry matures, new coins, products, exchanges, derivatives, and of course mines continue to emerge. For institutions, managing multiple accounts and services is a headache. Therefore, professional asset managers who can handle the whole gamut of services are in big demand.

What’s more, for exchanges such as Huobi, holding onto big customers by upselling them on more services is smart business. What better way than by managing their assets directly?

Matrixport is no stranger to crypto circles. Launched by Jihan Wu in 2019, the firm enjoyed a head start because of its deep relationship with the mining community, thanks to Wu’s past connection. Positioned as a one-stop digital asset financial services, Matrixport is extending that one-stop-shop to include a crypto derivatives exchange.

Crypto derivatives trading is for the hardcore traders, even in traditional finance. Matrixport’s entry into the market can be seen from two perspectives. One is to satisfy its existing client’s needs. Why would their current clients go on another exchange when Matrixport can do the same?

Secondly, deeply ingrained in the miners’ community and backed by big money, Matrixport offers richer liquidity compared to some existing players. Liquidity is the king in trading, and you can be sure that the customer will move wherever liquidity moves. 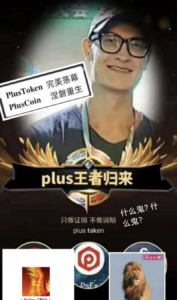 China claimed that it has cracked down and arrested all major suspects in the big crypto ponzi scheme, PlusToken.  Hmmm, I’m not so sure: your correspondent’s PlusToken WeChat group has also been actively defending PlusToken, and even touting its replacement. In the latest post, PlusToken has been rebranded as “PlusCoin,” a “nirvana” and “return of the king.” “Community members” are still asking questions and responding, probably hoping they can recoup some of their “investment.”