As yield farming continues to push demand for stablecoins, one platform is taking the cake.

Volume on the Curve Finance decentralized exchange jumped by $213M on the week COMP distribution launched, a ~16x increase from the previous week, as farmers scrambled to get their hands on USDT to maximize their earnings.

And there’s no sign of this slowing.  With the release of a framework for the CRV governance token, yield farmers are quickly flocking to Curve to take advantage of some of DeFi’s highest  APY’s and the promise of retroactive token distributions.

The hunt for CRV combined with a top trading venue for tokens which yield the highest APYs has propelled Curve to the 2nd slot amongst all DEXs, from 7th before the yield farming boom started, sitting behind Uniswap’s $142M, at $82M worth of volume in the past week according to Dune Analytics.

Besides its surging activity, another interesting aspect about Curve is its mysterious roots. The website lists no official team members and the project has no Medium or publication to reference an official launch date.

Despite this, we can deduce that the project was conceived in 2019, with NuChyper’s CTO Michael Egorov releasing the official whitepaper on November 10th of the past year. Julien Bonteloup, an early investor in the project, told The Defiant Curve has since raised a private round from known people in the industry.

Despite this amorphous, pseudo-anonymous structure, Curve has continued to ship new features and product upgrades such as adding virtually one new Curvepool per month, enhanced swap interfaces, and automatic staking onramps for liquidity incentives like Synthetix.

This cadence is best highlighted by Curve’s integrations with top DEX aggregators like 1inch, Paraswap, and DEX.ag in tandem with asset management partners like Zapper, Zerion, and InstaDapp.

For those who have been keeping an eye on Curve, you surely remember iEarn Finance (now YEarn), a project by Andre Cronje which offers a sleek front-end to connect to Curve’s liquidity pools without having to deal with their retro interface.

Despite taking a temporary hiatus, the industry-favorite Curve extension is set to introduce new trading strategies in the coming weeks.

Curve is becoming known for its low-slippage. The protocol’s AMM is designed in such a way that assets which share similar price targets (like $1 in the case of stablecoins) benefit from flatter curves than DEXs like Uniswap. 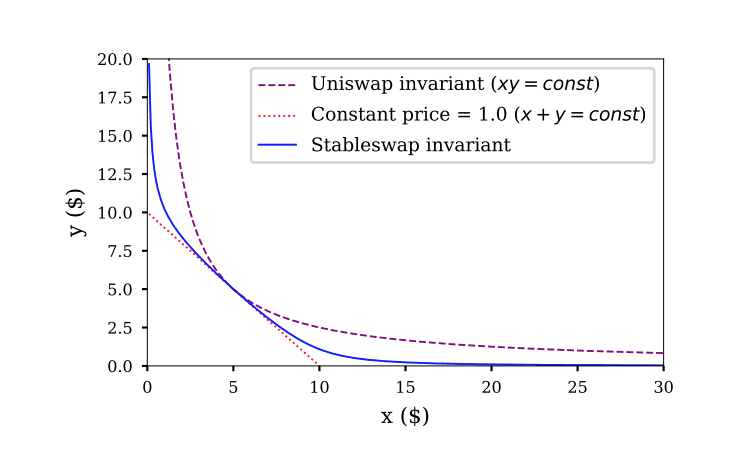 A great visual explainer of how this works from Kerman Kohli can be found here.

This novel approach to mitigate slippage has fueled large order trading which rivals that of centralized exchanges like Binance - best highlighted by this trade from the Synthetix Foundation in which $2.5M of sUSD was exchanged for USDC with only $50 of slippage and $1.77 in gas.

Now, Curve is starting to expand into uncharted territory with BTC liquidity pools. With the release of the renBTC pool and the sBTC pool, users can now trade different Ethereum-based Bitcoin wrappers with minimal slippage in tandem with liquidity incentives in the form of SNX, REN, BAL and CRV tokens. More on this here.

The sBTC incentives come in tandem with the sUSD trial in which those who provide liquidity to the sUSD Curvepool are able to earn ~23% APY denominated in SNX at the time of writing.

As Curve solidifies its place in the DEX landscape, projects with stablecoins or pegged wrappers will increasingly seek to trade on Curve to incentivize liquidity.

But, Curve has been intentional about the assets it supports - as Balancer’s recent black hat attack goes to show a liquidity pool is only as strong as its weakest token.

Regardless, the new hunt to farm CRV has continued to show the power of liquidity mining, with the number of unique LPs jumping by 65% from 1,286 two weeks ago to 2,115 at the time of writing.

The TLDR is that CRV will be issued retroactively, with the protocol’s 0.04% trading fees (which have accounted for roughly $2M in earnings to date) allocated to token holders using an Aragon-based CurveDAO and time-weighted voting.

To stay up with Curve, be sure to follow them on Twitter. If you’re reading this, you may very well stand a chance against the influx of new farmers once the CRV distribution goes public.