How crypto-activism is trying to change the world. 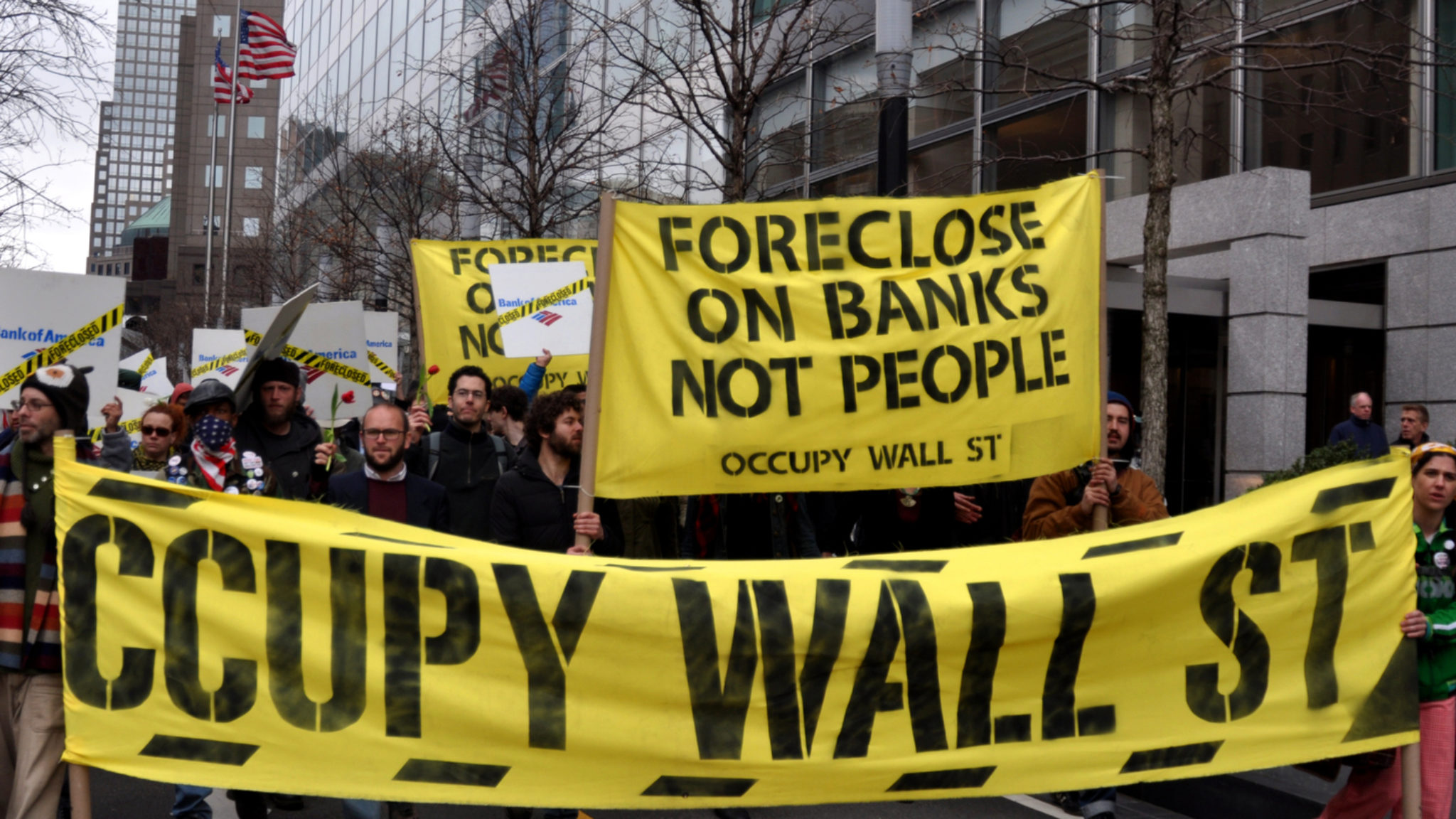 Blockchain has quietly been helping activists the world over find new ways of resisting the status quo. We take a closer look at this unlikely entanglement.

In the ashes of the Financial Crisis of 2008, bitcoin quietly emerged, kickstarting an ecosystem of cryptocurrencies and decentralized financial networks that don’t rely on central banks. Bitcoin became a statement against the status quo; a new form of activism.

For Micah White, the co-founder of Occupy Wall Street, the future of activism is in crypto. Even though his own street protest went viral in 2011, after thousands of protestors pitched tents near Wall Street to challenge wealth inequality, White considers street protest “a dying form of activism.” He says that “social media driven activism”, or “clicktivism,” isn’t particularly effective, either. But blockchain offers an effective alternative, says White. So much so, he took to the DEVCON stage in October 2019 to explain his vision for blockchain-backed activism.

First, White explained that blockchain sprouts new kinds of economic logic, which, if used, could derail traditional financial instruments. White points to the deflationary token, Bomb, which claims to be the world’s "first self-destructing currency." Each time a Bomb is transferred, one percent of the transaction is destroyed, meaning that its value deflates over time. Shuffle Monster meanwhile, takes a two percent transaction fee from every trade, half of which is burned, and the rest redistributed to one of the 512 top token holders. White’s own project, Sparkle, ventures even further, distributing two percent to everyone else in the economy.

White also said crypto is changing how groups fundraise. Whether pro-democracy movements like the Hong Kong protests, or ISIS, political groups have looked to crypto as a way of fund-raising away from institutions looking to stop them. For the Hong Kong Free Press, it raised funds in bitcoin to help provide impartial coverage of the Hong Kong protests. For ISIS, it used cryptocurrencies to help buy weapons.

“You can't create new forms of protests that are going to inherently not allow people that you disagree with to use it,” White tells Decrypt. “All we can hope for is that we make it easier and better for good people to use.”

He tells Decrypt it’s his mission to create the first smart contract that’s banned for political reasons. “If we can turn the smart contract itself into a form of protest, then we'll be opening up a whole new terrain of battle.”

White’s recently launched a smart contract that does just that: dETH, a coin that destroys ETH from the Ethereum economy.  “ETH sent to this smart contract is irrevocably killed and removed from the economy. It is not just burned, it is dead,” White wrote in a blog post.

Whereas burning a hundred-dollar paper bill leaves you, well, $100 poorer, destroying ETH creates value, through dETH, says White. The price of dETH increases by 0.1 percent with every purchase—and the way to purchase dETH directly, of course, is by destroying ETH.

Those destroying more than 3 ETH will receive a 30 percent bonus in the amount of dETH they receive. 3 ETH is the block reward for creating ETH, so destroying 3 more than ETH at a time thus means that more ETH is being destroyed than is created through block rewards.

Few—apart from perhaps White—have actually used dETH. But, since it’s just a piece of software, White said that dETH could be used by future activists, as and when necessary. “dETH will just exist on the blockchain until people take it seriously,” says White. If they do, “it'll take off”.

Another adversarial smart contract, Reigningemperor.com, runs on White’s Sparkle and is hosted on the peer-to-peer file storage system, IPFS. It spreads the message “Reigning Emperor,” a phrase the website claims is banned by the Chinese government. Any appearances of the phrase online are banned by an algorithm. Posting the phrase online lowers the social credit scores of Chinese citizens—the controversial social program whereby a low credit score, attained through misbehavior, could lead to denials of airplane tickets or apartment rentals. Posting the phrase “Reigning Emperor” online has reportedly led to arrests.

Activists wanting to spread the message can send ETH to this smart contract to receive the Reigning Emperor token, which they can then transfer to as many wallets as possible. Because the blockchain is anonymous, authorities can’t target Chinese citizens for spreading the banned phrase. And, due to the immutability of its distributed ledger, the message, once sent, can’t be erased.

The smart contract, to date, has processed just a handful of transactions. But just as people “needed Occupy Wall Street, even if they didn't know it,” White says that “activists need Ethereum, even if they don't know it right now.” Perhaps White’s prescience is worth paying attention to, Occupy Wall Street started with around 300 people, before spreading to 82 countries and a thousand cities. “Part of the point here is to call on other activists and be like, let's release things.”

White says that you’d better act fast: “Crypto’s in that golden moment—or maybe it's already ending—where people are drawn to the community because they think that this is a new form of changing the world that hasn't been tried before,” he said at DEVCON. “There's a window of opportunity that closes—and it might be closing now—where suddenly people start to think that this isn't a space where change is possible.”

But even if the future of activism isn’t in crypto, blockchain technology has inspired other schools of thought, says Zoe Hitzig, a Ph.D. economist at Harvard. Blockchain has “opened up [the] imagination to thinking about a kind of parallel universe in which people can redefine their social relations to each other,” she says.

“Academic economists have very limited ways of talking about the mixture of centralized and decentralized decision making: [in] traditional political economy, there’s the market, which is decentralized, and then the state, which is centralized.”

“Blockchain is a kind of testing ground in that it offers new ways for thinking about the relationship between centralized and decentralized decision making.”

Along with the creator of Ethereum Vitalik Buterin, and star economist Glen Weyl, Hitzig last year produced a blueprint for a new system for funding public good, called “Liberal Radicalism.”

Here’s how it works: if a government wants to match a contribution by some individual to some public good, the total funding has to be the square of the sum of the square roots of the individual contributions. So, if I put a dollar towards a new public library, you give $4, and Buterin gives $9, then the public would match that total figure by $14.

Confused? “The significance of it is that it overcomes this information problem and the free-rider problem”—where someone in a community chooses not to donate on the presumption that someone richer would donate at the same time. It gets people to donate, since they know that their contributions are going to be matched,” says Hitzig. Through the new system, those without much money still get a say, because their donation—essentially an expression of how much they care about an issue—is matched by a wealthy patron. Those who donate more than others, still get a greater say over where funds are allocated, but, because matching is calculated quadratically, it’s going to cost you more to express your preference.

Hitzig says Liberal Radicalism could provide a whole new system of taxation. “The existing system is mixing voluntary and involuntary contributions through taxes and subsidies to public goods in really mysterious ways that aren't well defined. It doesn't lead to a clear incentive structure that links up how people are spending their money with what public goods are funded. And that pretty much makes people hate paying taxes.”

Though Hitzig’s tax-utopia remains a pipe dream, this blockchain-inspired form of governance has already been enacted through something called quadratic voting. The premise is the same as quadratic financing—where larger donations are matched with more money, but smaller donations are still significant.

In quadratic voting, members of a group—for the sake of argument, a government—are allocated a certain number of votes to spend on projects. If, say, each member of government is allocated a hundred votes to distribute amongst ten bills, then allocating all hundred votes to one bill would mean a particular bill is more likely to pass—but you’d be defeated by a bunch of others spending only a few votes. Remember, because votes are calculated quadratically, the value of a vote decreases. Plugging two votes into a project actually costs you four votes, and to designate three votes to a project, you’d have to spend nine of your hundred votes.

The US state of Colorado has used quadratic voting to vote on its budget priorities, and Taiwan’s Presidential Hackathon has adopted the quadratic voting system this year, too. Taiwan’s Digital Minister, Audrey Tang, attributes the idea to “blockchain people” like Vitalik Buterin. Blockchain companies have also taken up the call: Eximchain, a blockchain focused on helping supply chains share information, last year integrated quadratic voting into its protocol.

If White’s adversarial smart contracts never take off, Bitcoin crashes, and everyone gives up trying to track scallops and rocks on the blockchain, blockchain’s lasting legacy could be in its contribution to new types of social organization. Thanks, Nakamoto.