The 'Great' Blockchain of China?

The Chinese government is big on blockchain, but there are fears it might use the technology—in spite of its liberating potential—to extend its vast surveillance powers. 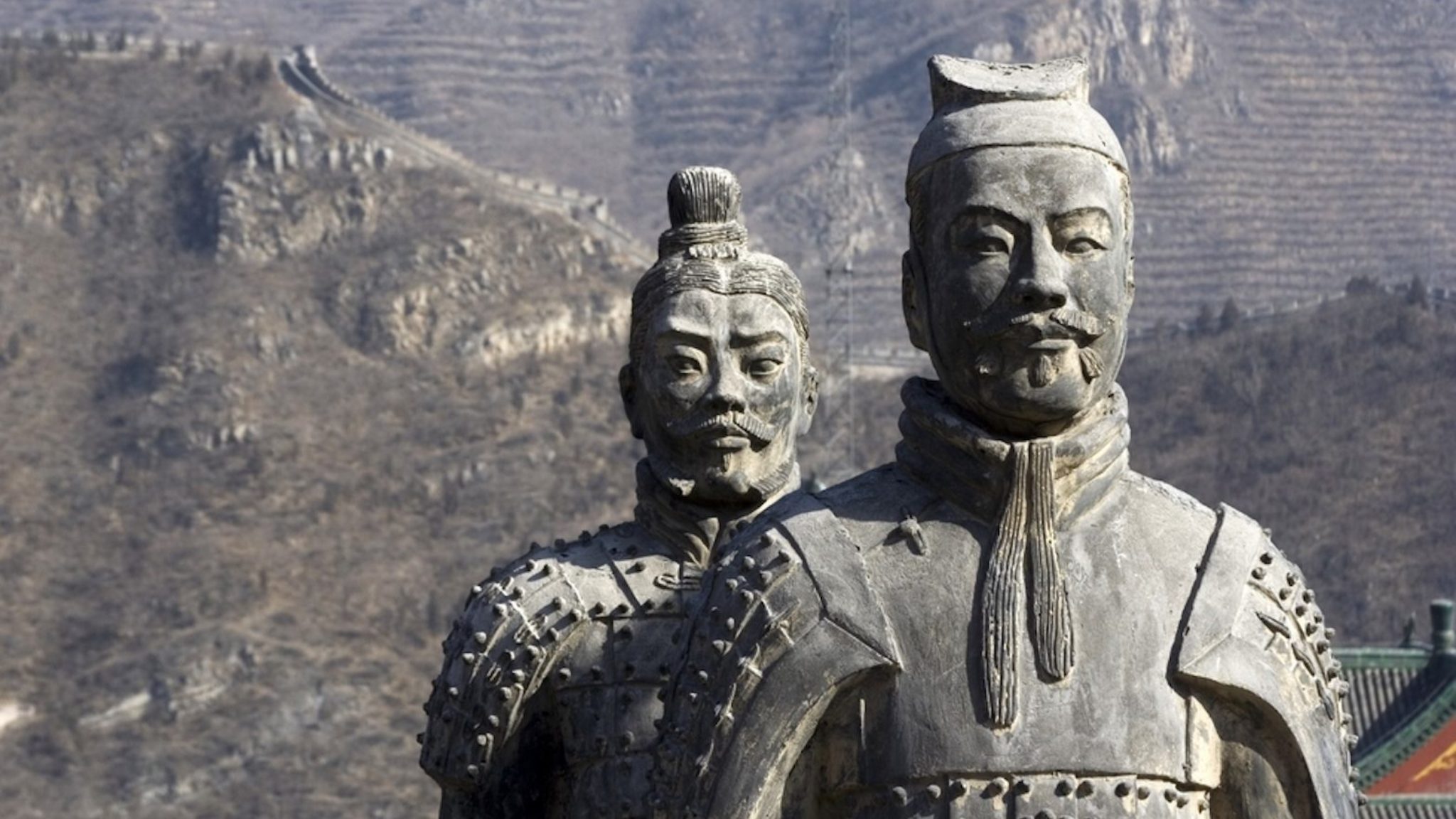 China’s blockchain scene is a little weird. The country has done away with cryptocurrencies, crypto news sites and crypto exchanges, yet continues to sink vast resources into what it really finds exciting: blockchain’s tantalising traceability.

Though Chinese government officials have lauded blockchain as a wonder “ten times that of the Internet,” the Party has otherwise made its position clear. Blockchain is great, but “decentralization” itself is a no-go. According to a Chinese state media broadcast, “decentralization”—eliminating the powers of a central authority—doesn’t capture the “essence” of blockchain. There is, the broadcast continues, no way to “get rid of the center.”

In the West, blockchain is perceived as a tool of popular liberation, says Dr. Arthi Manohar, a research fellow at Northumbria University in the UK, who has studied and written about blockchain technology and its relation to China’s surveillance program. Yet in China, she says, blockchain is associated with “mass surveillance and social control.”

Your mistakes, immutably preserved and published

THEKEY, a blockchain startup “exclusively authorized by the Chinese Government,” has already taken steps in this direction. Using NEO, a decentralized computer network like Ethereum, the project has connected the personal identity data of 210 million people in 66 cities. That data includes government-issued IDs; behaviour data, (consumer habits), and fingerprint data, all “authenticated by relevant government authorities,” the company says.

Within a year, the program is expected to “increase to 150 cities, and cover identity data of 600 million people.”

Such a system could augment China’s already formidable “biometric scanning network,” which combines advanced facial-recognition technology with deep pools of digital records to allow CCTV to pick out and identify, without permission, the personal data of its 1.4 billion citizens. (The system’s notable successes include identifying one man in a crowd of 50,000, as well as, in another instance, BBC reporter John Sudworth in a Guiyang airport.)

Just as suitable for blockchainification is China’s nascent “social credit program.” That controversial system monitors behaviour, rewarding “ideal citizens” with perks and punishing minor infractions—such as jaywalking or having a cousin who’s an outspoken critic of the state—with docked credit ratings, limited access to jobs and flight bans.

China’s social surveillance and blockchain make a natural fit, says Martin Chorzempa, who has covered China for several years as a research fellow at the Peterson Institute for International Economics. The technology appeals, he says, because it “can be used to automate many aspects of governance.”

Self-executing smart contracts, for instance, can “automatically punish and reward people based on their behaviour” in a way that regular surveillance tools cannot. Meanwhile, a deep, immutable record of citizens’ actions is invaluable to any would-be techno-autocracy.

The more inconvenient features of blockchain technology can simply be dumped—THEKEY doesn’t use any proof-of-work style consensus mechanism, and instead allows a central authority to verify transactions.

Indeed, a new system in Zhongshan, in the southern Guangdong province, is proudly exploiting these perks. Recently, the region’s local justice department announced it was tracking parolees via a distributed, statewide ledger.  The system will be able to detect whether a person is likely to re-offend, as well as track their everyday whereabouts, in a page pulled straight from Minority Report.

Chorzempa, however, stresses that it’s not necessarily a precursor to full-blown dystopia. Historically, some of the best legal systems have nonetheless been prone to human error, he points out. Even judges have been shown to sentence differently depending on whether they’ve had lunch.

Daniel Kahn Gillmor, a senior staff technologist at the American Civil Liberties Union in New York City, who covers blockchain’s role in civil rights, still smells doom. He puts China’s blockchain gambit down to the technology’s ability to provide a “non-repudiable”—i.e. immutable— record of past behaviour, which makes it easier for governments to “find infractions.”

This, he says, creates a “panopticon effect,” whereby “people censor or limit themselves whether or not there are external requirements, simply because they know that they could be observed.”

That, he adds with understatement, is “problematic.”

Power to the Party

What about cryptocurrencies? Bitcoin and friends’ whole “power-to-the-people” schtick doesn’t quite gel with China’s decision-makers, who are more interested in “visibility into transactions,” says Chorzempa.

Which is exactly what the Communist Party is creating. Last year, government sources revealed that China was devising its own cryptocurrency, a “central bank-issued electronic currency” whose entire raison d’etre was that it would be “easier to trace.”

Tie that revelation in with the Chinese Supreme Court’s recent decision to accept blockchain data as forensic evidence, and you have the beginnings of an unprecedented state-backed money-tracking apparatus.

Much of the Chinese government's heavy-lifting is carried out by the country’s incumbent tech giants, particularly multinational conglomerates Alibaba and Tencent, which have been granted enormous subsidies. Alibaba, for its part, has racked up some 90 blockchain patent filings (approved by the World Trade Organisation), the most of any company worldwide. Chinese industry as a whole has chased down 225, compared with the United States’s 91.

The tech giants have performed their designated roles with relish. When the Chinese government decreed that cryptocurrency be banned in all its forms, Alibaba and Tencent duly obliged. Tencent, for instance, banned cryptocurrency payments on its subsidiary messaging platform WeChat.

It’s in the companies’ interest to “work together with the government and not run afoul of very strong authorities,” says Chorzempa. Through this cooperation, the companies are “complicit in providing the technical systems that lead to governance,” which in turn increases the companies’ own traffic flow, a winning quid pro quo.

This dynamic becomes most apparent when considered alongside China’s booming crypto-mining industry. Mining conglomerate Bitmain, one of the largest in the world, enjoys free rein in its aggressive westward expansion despite the blanket ban on the very industry that sustains it.

This might be deliberate, the ACLU’s Gillmor suggests. By allowing mining power to amass unchecked abroad, the Chinese government indirectly acquires enormous leverage over the networks of cryptocurrencies it has banned, such as bitcoin and ethereum. This in turn extends its international reach. (Though President Xi Jinping has repeatedly affirmed his commitment to staying out of foreign affairs.)

There is another side to this all apocalyptic hand-wringing, says a source from Shanghai-based fintech consultancy Kapronasia, who asked to remain anonymous.  China’s chief goal, he insists, is simply to use blockchain to dramatically speed up back-office functions in the financial sector, much like Ripple does.

What’s more, it’s hardly oppressive that China favors blockchain’s “immutable and transparency function,” he argues. Chinese decision-makers “don’t want their authority to be decentralized.” Indeed, what government would endorse a technology that subverts its own laws?

The Road to El Surveillance

Yet China’s crypto-gambit squares neatly with the strategy it has long adopted for “charismatic technologies,”—a term Dr. Arthi Manohar, of Northumbria University, uses to describe new technologies that  generate feverish excitement before the potential risks have been assessed. The most obvious of these was the Internet.

In 2012, the Communist Party, under the stewardship of President Xi, stripped the World Wide Web of many of its empowering elements, leaving a unilateral surveillance engine that trundles over civilian dissent. Using centralized controls—such as ”deep-packet inspection,” “rigorous blocklists,”  and “data filtering,” says Gillmor— this eventually resulted in the Great Firewall of China, which blocks millions of unfavourable websites and tracks the movements of its online denizens.

Blockchain technology can undergird this Great Firewall with devastating effect. But as with every ying, there is a yang. China’s decision to centralize blockchain-powered applications, for instance, in some senses diminishes the technology’s destructive capabilities—reckless decentralization in the US, for instance, has already led to widespread money laundering and unregulated 3D-printed guns. It makes sense for a state to want to combat such practices.

Moreover, some of China’s uses of blockchain are markedly non-dystopic. Immutably recorded rice sourcing and blockchain-streamlined insurance processes, for instance, are hardly portents of our collective doom. China, Chorzempa says, wants to simply use these technologies to maximise the economic benefit, which it can do with powers far more sweeping than those of the US. It might just be that blockchain works out cheaper, he adds.

Dr. Manohar too urges caution when criticizing China. Blockchain as a technology does not lead inexorably to totalitarianism, she says, though its implications are nevertheless worth careful scrutiny. “Would you want Blockchain to hold a small parking fine you forgot to pay?” she asks.

“It all comes down to what regulations are in place when the government implements a technology on a massive scale,” she adds. Yet with China—which need not pay heed to third party regulators like the EU, whose “GDPR” legislation allows citizens to delete personal data from online records— this is all tending rather obviously toward a mass surveillance structure that, unlike the messy, meddle-prone data troves of the Internet, is algorithmically hardwired to never forget a thing.

The more unsettling cases, then, ought not be dismissed as harmless. China’s aforementioned economic goals, noble as they are, dovetail neatly with its ambitious surveillance goals, and to disentangle them would be dishonest. Indeed, it’s only natural that China would take the key features of blockchain—traceability, consensus mechanisms, immutability, smart contracts—and amp them up, or simply override them, in service of this two-fold objective.

China’s social credit program, expected to be fully operational by 2020, has already been a resounding success, insofar as jaywalkers, independent journalists, and dissident artists—scrutinized by the unblinking eye of the state—have had their credit ratings docked, their passports blacklisted, and their assets stripped.

Yet blockchain technology, deployed to its full potential, can do to China’s surveillance program what the data-porous Internet never could—make the petty misdeeds of these Chinese undesirables live forever.