Encointer's plan to bring universal basic income to the unbanked

Encointer, a Zurich-based startup, is working on a crypto-based universal basic income scheme that could radically change how we think about the mechanics of giving away free money in local communities.

The Web3 Foundation, which supports applications for decentralized web software protocols, likes the idea so much it provided a grant to fund the Encointer testnet that launched on April 9th. The basic idea is that community members can convince local businesses and citizens to pool their resources to wipe out poverty, from the bottom up.

“The Web3 Foundation is very interested in supporting projects that explore new digital financial systems, which are potentially fairer as well as fully privacy preserving,” Web 3 Foundation grant leader David Hawig told Decrypt. “In addition, the team behind Encointer has proven to have a unique knowledge around blockchains and [other unique technologies] that have gathered a lot of interest from many projects and enterprises in our ecosystem.”

How the Encointer project works

Here’s how the project works. Local groups at a village or neighborhood level gather in person each month to verify that tokens will be given to real community members. Encointer UBI tokens rely on a “proof of personhood” protocol for fair distribution. It’s based on the idea that a person can only be at one place at one time, so even a small group of just a few people can verify each other’s identities and generate Encointer tokens.

Once verified, tokens for the Encointer-based local cryptocurrency that can only be used among willing participants of the scheme are then minted and distributed. The number of participants is limited by how many people can realistically get together all at once to perform the verification process.

Using a blockchain built on the Parity Substrate framework ensures the entire verification and minting process is conducted by members of the community without relying on a government or other centralized authority that could manipulate the system.

One of the more innovative ideas in Encounter’s scheme is that UBI tokens automatically lose 7% of their value per month, while regularly issuing new tokens. The idea here is to peg the cost of goods, such as bread and fuel, at the same number of tokens, offsetting inflation. So the cost of milk will always be X tokens, even though the underlying token will steadily decrease in value.

In theory, this creates a cycle where UBI tokens are accepted throughout the community and paid for by the eroding value lost by those who accept tokens for payment. 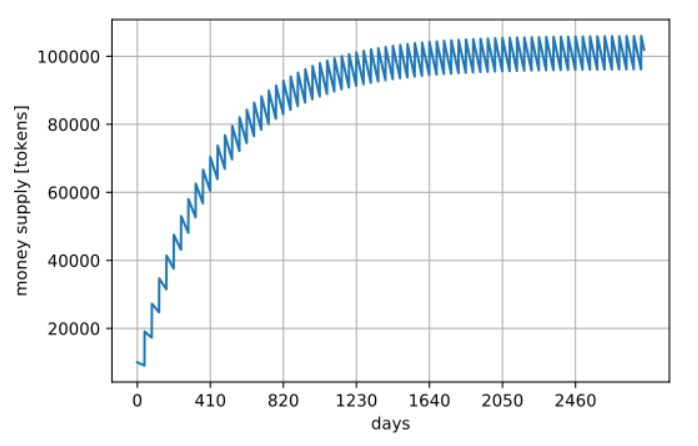 As an example, a mother with no income can spend her Encointer tokens at a local grocery store because the owner knows he can buy bananas from the local seller, or at a local restaurant. He still needs regular cash to import non-local goods, so Encointer tokens are meant as a supplement to the wider economy.

“The people I'd expect to benefit the most are the unbanked and citizens of dysfunctional states that suffer from hyperinflation or cash limitations,” Encointer founder Alain Brenzikofer told Decrypt. The idea is similar to other crypto-based programs that have been tried. “I see local currencies as complementary to traditional ones. I believe the important thing is that Encointer can start grass-roots communities without awaiting a lengthy political process.”

Freedom from volatile economies in developing areas represent the most fertile ground for Encointer, but the framework is applicable to developed economies as well. Several cities across the US including Portland OR and Washington D.C. have launched similar local currencies to help stimulate their economies.