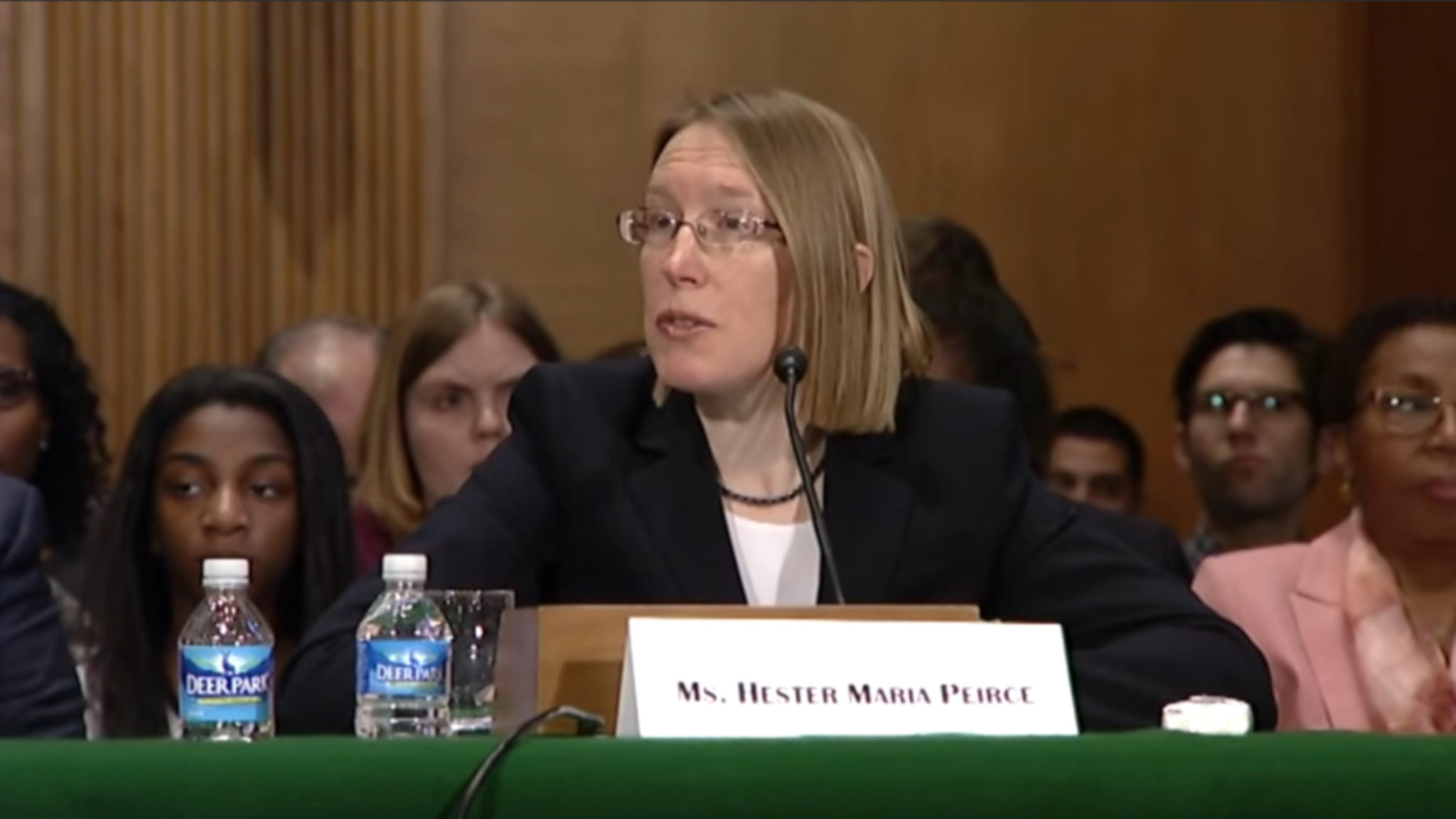 SEC Commissioner Hester Peirce today "formally proposed a safe harbor" for cryptocurrency projects that would allow developers three years before being subject to existing securities regulations, according to a report from industry publication CoinDesk.

The idea is to allow crypto projects to fundraise through the sale of blockchain-based tokens as they work towards becoming “sufficiently decentralized.”

So what does it all mean?

Decrypt first reported in October that Peirce was looking to provide safe harbor to crypto entrepreneurs, and she's publicly spoken about the idea since at least August. Today's report indicates that her idea has progressed, though it's unclear whether Peirce has yet shared her proposal with her fellow commissioners.

Here are three things to know about the proposed changes, as they've been reported [Decrypt has requested a copy of Peirce's proposal]:

1.
1.
Peirce believes that token projects that ostensibly start out as securities may mature into non-securities. The three years would allow these projects to mature into tokens that can be used on a network. An example here might be EOS. Block.one sold ERC20 tokens during its presale but then swapped them out for a decentralized EOS token on the decentralized network. In the process of doing so, they may have moved from security tokens to commodities or non-securities.
2.
2.
This doesn't mean average crypto buyers aren't protected. Token projects would be subject to specific disclosures and the anti-fraud provisions built into federal securities law. Projects must disclose the names and qualifications of the development team. Crucially, each member must state how many tokens they hold or may be in line to hold.
3.
3.
Three years after the token sale, the team analyzes whether the token is a security. If the token isn't broadly held, buying or selling it might be considered a security transaction. To boost liquidity and decentralize the asset, Peirce encouraged projects to trade it on a regulated secondary market.

Jerry Brito of Coin Center, a cryptocurrency lobbying organization, wrote today that the proposal would solve a known problem: Under current rules, "if you raise funds by selling promises of tokens on a decentralized network that you plan to build, that's pretty clearly a securities offering and you are obliged to comply with the applicable rules."

What Peirce's proposal would solve, he said, is the uncertainty that currently exists after those tokens are delivered by allowing "time to build a functional, decentralized network and grow participation in it to the point that the network is not reliant on their continued efforts." Moreover, he said, in addition to developers getting a longer leash, regulators would still be able to ensure proper disclosures are made, investors would be protected by them, and the public would benefit from decentralized blockchain networks. "This is a win-win-win-win," Brito wrote.

Indeed, it's a solution that most cryptocurrency companies seemed to get behind, judging from the tenor of multiple comments shared with Decrypt. Binance.US CEO Catherine Coley said, "It’s encouraging to hear Commissioner Peirce acknowledge that adequate liquidity for secondary trading is important to the survival of a project."

However, without the full report, it's hard to say how exactly that crucial bit would work. One prominent cryptocurrency lawyer, Preston Byrne, implied that it wouldn't.

"This proposal from Hester Pierce is bonkers,” he tweeted. “On the one hand devs are supposed to turn securities into non-securities in three years; on the other they’re expected to actively solicit third party exchanges to facilitate secondary trading and liquidity, as with... securities?"

Byrne also questioned whether buyer protections had been thought through, pointing to a tight statute of limitations on lawsuits related to securities violations. He asked, "Is it intended that a safe harbor for three years deprive investors of a remedy?"

Those questions very well may be answered in the formal proposal, but the public won't know unless (or until) it's released for public comment. Instead, this preview amounts to something of a leak.

That rankled Gabriel Shapiro, an attorney and founder of ZeroLaw. He told Decrypt, "There will be a public comment process, but of course once the SEC has proposed a draft of something they are reluctant to make changes. Most of the opportunity to shape the approach has been lost by then."