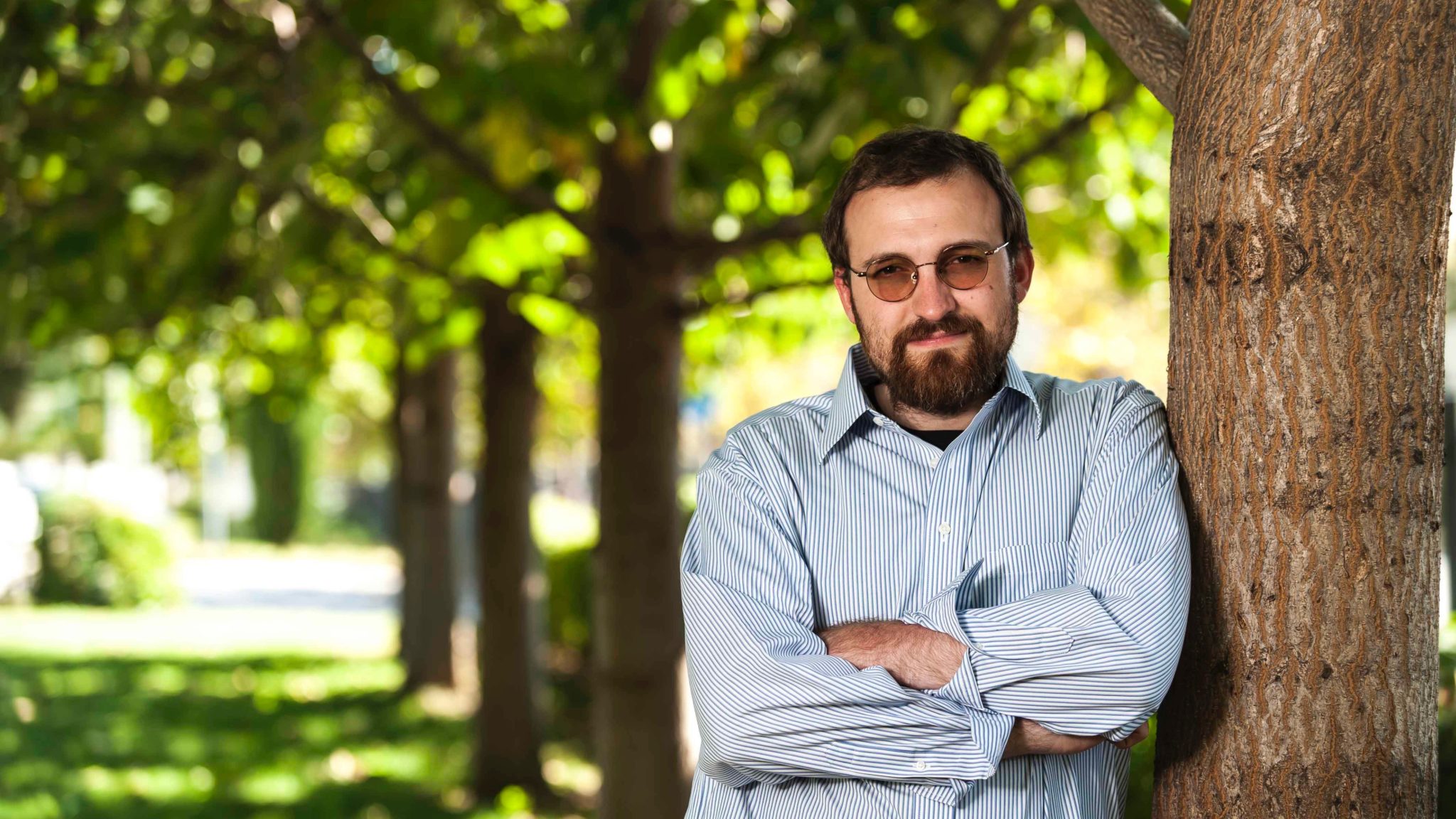 In his Longmont, Colorado office, there’s an odd painting on the wall that Charles Hoskinson faces. It depicts a Roman man sitting in a beautiful garden. What’s striking is the look of utter torment on the Roman's face, even as he sits in a such a lovely place.

In many ways that’s an apt metaphor for Hoskinson, the man who founded the new, long-anticipated and potentially revolutionary crypto platform Cardano.

“I’m kind of polarizing. People either like me or they hate me. There’s not a lot of people in between,” he says.

True enough. As the creator of Cardano, Hoskinson, 32, is revered and celebrated as a serial entrepreneur and polymath. But as a co-creator of Ethereum, the second-most valuable blockchain, he’s been derided as an incompetent, a turncoat, a thin-skinned crybaby and worse.

Hoskinson has spent the past five years building Cardano, the 13th largest cryptocurrency by market cap, working relentlessly to upend and displace Ethereum, the second largest. Now, with the launch of “Shelley”—the decentralized element of the project’s extensive roadmap— staking is about to come to Cardano. That means token holders will be able to gain rewards by pooling their resources to validate the Cardano ledger.

A new era is beginning for Hoskinson. But if all goes according to plan, it'll be even more polarizing.

An investment bank in sky

Born in Hawaii, Hoskinson comes from a family of doctors. He eschewed medicine for math, but bailed before completing his PhD at the University of Colorado at Boulder. Despite this, he’s a big fan of the rigorous academic, but painstakingly slow, research process.

In 2008, the same year Satoshi’s Bitcoin paper was published, Hoskinson joined Ron Paul’s presidential campaign. He was enthralled with Austrian economics and theories of money, which argue that a monetary system based on fiat money is inherently unstable. “When Bitcoin came out, it was like the spiritual successor to what Ron Paul was talking about,” he said.

A lot of people hate me in the Ethereum ecosystem. They say I'm a monster.

Fellow Bitcoin enthusiast, Anthony Di Iorio introduced Hoskinson to Vitalik Buterin’s white paper on Ethereum later that year. Hoskinson had plenty of questions. So Di Iorio and Buterin invited him to one of the early meetings, when the project was just getting started.

“At that point, it was only four people in the meeting and I was the fifth person,” he said.

Hoskinson jumped in with both feet. He helped design Ethereum’s ICO, and briefly became its CEO, making the pivotal decision to register the foundation in Switzerland.

But differences about the strategy the project should follow led to a falling out over whether Ethereum should be run as a non-profit organization or not. Hoskinson favored a for-profit approach, and in June 2015, he decided to quit. (Though others say he was fired.)

A Japanese version of Ethereum

Ethereum, of course, kicked off a new wave in blockchain innovation, leading to the ICO and token boom. “The market just went batshit crazy, and Ethereum was used to fund all manner of crazy ideas and became like an ‘investment bank in the sky,’” Hoskinson said.

He took a sabbatical after leaving the project, but was soon approached by former Ethereum colleague Jeremy Wood about a new project called IOHK, (short for “Input Output Hong Kong,” which is where Hoskinson was living at the time.) The idea was to  build cryptocurrencies and blockchains for corporations, government entities and academic institutions—to go even further than Ethereum in scalability and security.

Cardano came about after IOHK clients proposed that the developer build “a Japanese version of Ethereum,” Hoskinson later said. Initially, Cardano focused on the Japanese market and aimed at building “something that was the intersection of commerce, computation and compliance,” he said.

Hoskinson says that Cardano is an improvement over first-generation platforms such Bitcoin, and second-generation blockchains such as Ethereum. He calls it a “third-generation, smart-contract platform and cryptocurrency,” which, he claims, is more rigorously researched, tested, secure and scalable than the competition.

Cardano raised a respectable $62 million in its ICO, in early 2017. It was marketed as an “investment to retire on,” and sold primarily to Japanese investors; in fact, 95 percent of the buyers were Japanese.

It’s expanded its base, since then, to include developers and corporate partners all around the globe.

“Two years from now I think everyone will define me by Cardano,” Hoskinson says. “It actually does the things that we’ve always wanted to do in cryptocurrencies, which is build a financial operating system for people who don’t have one, one that actually can compete with a global financial system.”

In a few weeks, a so-called “incentivized test net” will roll out, which will enable Cardano token holders to stake and earn rewards, while developers tweak the test net.

Then comes the real fun.

Shelley is planned as a series of releases and is designed to incrementally bring complete decentralization to Cardano. Eventually, the network will be 250 times more decentralized than other blockchain networks and, “once turned on, it will run like Bitcoin,” says Hoskinson. That means Cardano is designed to run forever and without censorship or intervention.

Shelley’s bleeding edge rests on a next generation protocol named Hydra. Its development is nearing completion, and it will ensure that multiple versions of the consensus algorithm can run in parallel, so that you get many times more performance, David Esser, Cardano’s senior project manager told Decrypt.

And the final phase, “Voltaire,” is dedicated to on-chain governance, and is expected to be completed by the end of 2020.

The tortoise and the hare

Cardano has often been compared to a tortoise, struggling to keep up with the rapid development at other blockchain platforms such as EOS or Tron. But development is proceeding to schedule, said Hoskinson.

Test net rewards will be transferable to the mainnet when it launches next year, giving people a convincing near-term reason to buy and hold Cardano’s ADA coins, according to crypto ratings firm, Weiss.

“Cardano, has always impressed us with the high quality of all the elements that contribute to a robust proof-of-stake, blockchain-based ledger,” Juan Villaverde, who leads the Weiss Ratings team of analysts, told Decrypt.

The Weiss review called out the caliber of Cardano’s team and the rigorous nature of its research.

Indeed, the body of academic research on the Cardano protocol, “Ouroboros Hydra,” is now nearly complete.

Ouroboros Hydra “is the capstone, and it's all done,” said Hoskinson.

He’s most proud of the work his team has done on theproof-of-stake protocol, which he claims will put Cardano ahead of Ethereum, which is racing toward the same goal. Many people believe that a functioning proof of stake protocol will make blockchain networks more secure while eliminating the consumption of electrical power as the underlying staking mechanism.

Buterin started grappling with Casper, his own proof-of-stake solution, in 2014, well before Cardano. Hoskinson claims that, even though Cardano started later, it has produced more objective results that make it further ahead.

Hoskinson says that the full Cardano network, with proof-of-stake and all the trimmings, will launch before the end of 2020.

“We were the first to prove that proof-of-stake can have the same security properties as Bitcoin,” he says. Ethereum has adopted a “serpentine” approach, he asserts, and is “trying to reinvent the whole world.”

Asked for comment, Buterin told Decrypt that it wasn’t about being the first to launch a proof-of-stake (PoS) network, which actually has happened in 2013. “The goals of modern PoS protocols are much higher now,” he said. “Maybe Ouroboros will launch some form of PoS first, but that is unremarkable.”

The Ethereum co-inventor also challenged Hoskinson’s claims that Cardano is technologically superior: "Last time I looked at Ouroboros, it does not even try to deliver the things that Casper has tried so hard to deliver. Finality, fast confirmations, etc.”

Though it’s been five years since he left, Hoskinson’s relationship with Ethereum is still complicated.

He grabs every opportunity to contrast the rigorous and methodical pace of development on Cardano, with Ethereum, which he believes has been hijacked by what he says is a cult of personality that surrounds Buterin.

“In general, I don’t have good relationships when there’s a competitive reason not to, for example with Ethereum or EOS,” he admits.

But, much as he likes to slam Ethereum, he dislikes talking about his early involvement. He’s been asked—repeatedly—to pore over every small, granular detail, he said. Three books have now been written on the incendiary story of its founding, and two have been optioned as movies.

The cause of much of the bad blood that remains, according to Hoskinson, is actually his championing of Ethereum Classic—the cryptocurrency arising from Ethereum’s DAO hack and subsequent fork.

“A lot of people hate me in the Ethereum ecosystem. They say I'm a monster, that the only reason I got involved was because I wanted to hurt Ethereum,” he said. “They said that I'm the DAO hacker!”

In his defense, Hoskinson contends that Ethereum and Ethereum Classic are non-competitive and can co-exist and even complement each other. And, two years after the fork, that view now finally appears to be gaining momentum.

A Soul in Hell

Thanks to progress with “Shelley,” the decentralized element of Cardano, an air of achievement hangs over the 100-odd Cardano community members standing on the grounds of the Agricultural University of Plovdiv, Bulgaria, for Cardano’s second anniversary celebration.

“A society grows great when old men plant trees in whose shade they know they shall never sit,” quotes Hoskinson, from a Greek proverb.

Soon after the “Voltaire,”  self-governance phase of Cardano is rolled out at the end of next year, Hoskinson is planning to take a back seat.

He says he intends to hand over the reins for overseeing the development of Cardano to the Switzerland-based Cardano Foundation. Earlier this year, a new chairman, Nathan Kaiser, was appointed. His job has been to build an interim board, after a power struggle led to a falling out between Hoskinson and the previous chair, Michael Parsons.

There’s still a lot of work ahead. “And that's the point—why we're here planting trees,” said Hoskinson. “It takes a long time to grow these systems and build these systems up—20, 30, 40 years.”

Planting trees, the beauty of the garden—it calls to mind the picture that sits on the wall of Hoskinson’s office.

It turns out it’s a copy of a painting, done at the turn of the 20th century, by Evelyn De Morgan, called, A Soul in Hell. According to its description, forwarded to us by Hoskinson’s office: “This man, surrounded by all that is beautiful and desirable, by the force of his own dark spirit dwells in a Hell of his own making.” Perhaps with the advent of Cardano, Hoskinson will at last make his peace with the world.