The man who would be Satoshi had his day at the Oxford Union, where a heated exchange with Decrypt took a decidedly Trumpian turn. 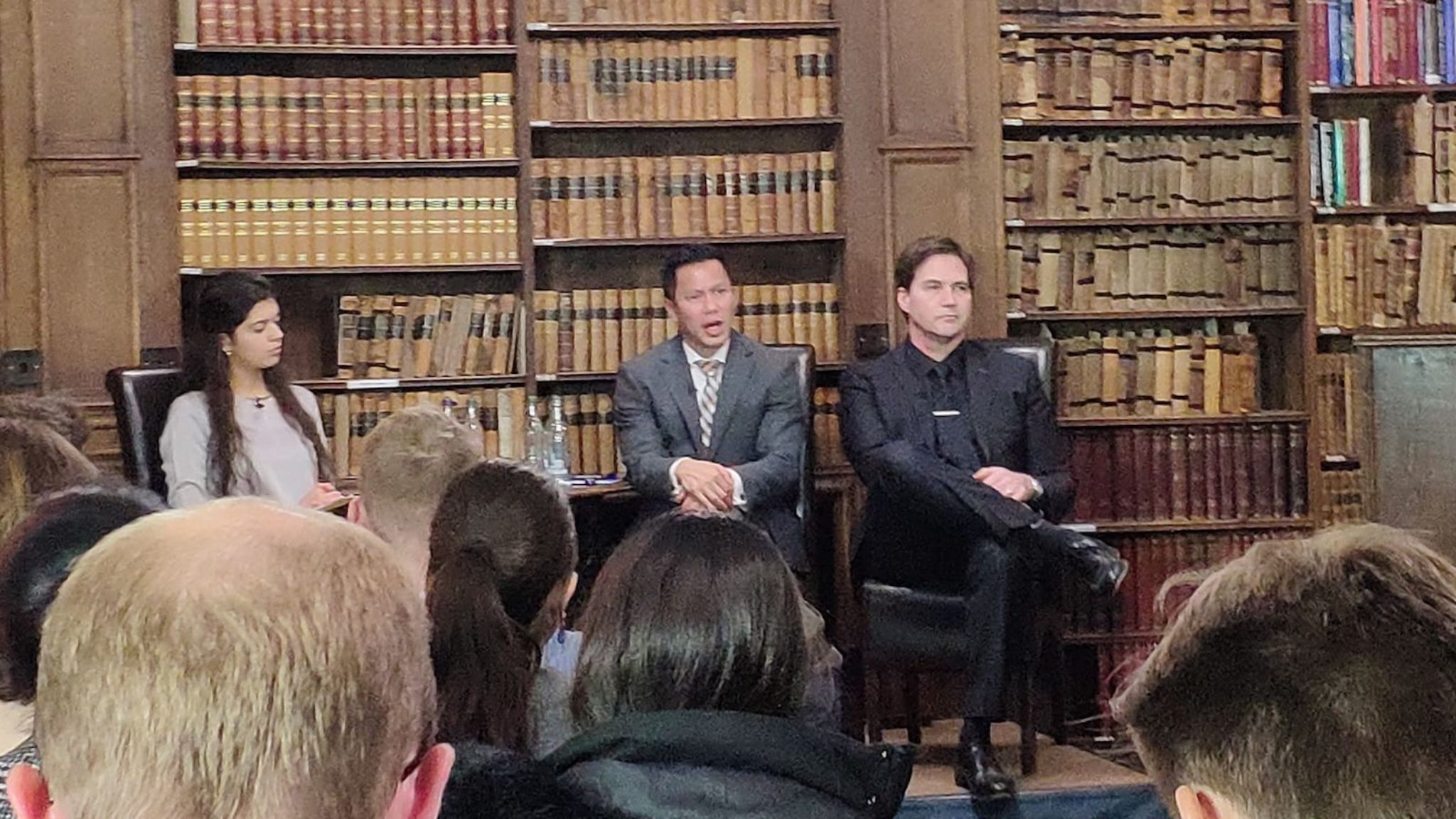 Updated to include comments from Kyle Torpey.

OXFORD, UK—Self-proclaimed Bitcoin inventor Craig Wright appeared at the Oxford Union Tuesday night, to regale the few dozen bored students who had turned up with his plans to “restore the original Bitcoin protocol, to keep it stable, and to enable massive on-chain scaling, to promote the global growth of...Bitcoin SV.”

But we went for the Q&A. We had questions.

The event began with Jimmy Nguyen, the chairman of Bitcoin SV development firm nChain, who spoke fulsomely about Bitcoin SV and how it would restore trust in our ailing institutions. Wright followed, covering a range of predictable talking points: the apostasy of Bitcoin “Core” supporters, his passion for law, and his early jaunt as a presbyterian priest.

At last, the Q&A began, with Wright fielding questions and Nguyen providing cover for the prickly questions that Wright wouldn’t answer.

The student moderator, who had the first question, went straight for the jugular, asking Wright whether it irked him that the majority of news outlets still described the inventor of Bitcoin’s identity as “unknown.”

In his response, Wright took a decidedly Trumpian turn. The articles cited by the speaker, he said, were simply “paid opposition, the ones owned by people backing [rival Bitcoin development firm] Blockstream.” He described his detractors, singling out crypto news site CCN, as being entirely “owned by a group of people who are backing alt-chains, who are backing multiple coins, who are backing unregulated and uncontrolled exchanges.”

Nguyen stepped in to provide the rearguard. “A lot of the media platforms have their own agenda, so you’ll have to start learning to filter the truth, or the shaded truth, or non-truth of what is published,” he said. “And it’s hard to understand if you don’t work in the field because you’re just reading things.”

“I come from America and you’ve got a president who always crows that it’s fake news,” he added. Indeed, he said, Trump’s complaints were understandable. “All of the crypto sites, most of them, have some agenda.”

The moderator tried to butt in. “I read an article in Forbes…,” she began, referencing an article published April 29 called, “Here's What The Bitcoin Community Should Do About The Fake Satoshi Nakamoto,” which was critical of Wright.

“It was a paid opinion piece,” snapped Wright. “Kyle Thorpe right? He’s not a journalist. He’s employed by these other people.”

“It’s an op-ed opinion piece that you can pay for placement,” added Nguyen. “[But] because it’s on Forbes, people think it’s a journalist saying something.”

To be fair, Kyle Torpey—not “Thorpe”—is listed as a “Forbes contributor” on the article in question. It was impossible to determine whether that piece was paid placement or not, before the article was rendered unreadable by Forbes’s usual cacophony of pop-up ads, video players and other garbage. However, Torpey’s bio clearly indicates he has written for a variety of publications, including Vice, Motherboard, and American Banker, which do not take paid placement.

(Update: Torpey reached out to us and denied the charges. "I was paid by Forbes for the piece, not by anyone else," he said.)

“There’s not many good reporters anymore,” Wright sighed, continuing. “They don’t check, they’re just quick [...] You don’t have the newspapers you used to. Journalism isn’t what it used to be.”

Speaking of which, Decrypt finally had the opportunity to ask a question.

We began by mentioning a magazine that probably didn’t have an agenda: Wired, which in 2015 “outed” Wright as Satoshi, citing—in part—a blog post dated to 2009, in which Wright appeared to mystically pre-empt Bitcoin's beta release days before launch.

Wired's supposed screenshot of Wright's pre-launch blog post, whose references to the forthcoming beta, if true, would suggest some level of involvement within the bitcoin project. Later, Wired would claim the post was one of several that had been mysteriously backdated.

Wired later backtracked, however, alleging that a search through the old versions of the post via internet archive Wayback machine suggested that it might have been backdated—as in, had been written after the fact and timestamped with an earlier date, "sometime between October 2013 and June of 2014."

So we asked: Given that Wired, having originally supported Wright’s claims, had no clear agenda, how would Wright respond to those allegations—allegations considered by many to be a smoking gun?

But when pressed, he responded that it was impossible to see the original blog post, since it had been deleted. It appeared he was talking about  another "smoking gun" blog post, dated to 2008, which supposedly had been deleted. But the 2009 post was preserved on the Wayback Machine, so you can see it, we pointed out.

“It's not valid evidence,” he said.

“The original [blog post] has been deleted,” he said. “It doesn't exist on the Wayback Machine.”

Wright continued in this vein, insisting that the post—which, again, has been archived—was deleted and that Wired couldn’t possibly have known anything about it.

Eventually, Nguyen calmly intervened. “I’m telling you as a former lawyer that courts of law don’t accept Wayback Machine printouts as reliable evidence of what a website may or may not have looked like…” (They can and do.)

“You can choose anything you believe,” said Nguyen. “The archive may not be true.”

We pointed out, again, that we were talking about the 2009 copy. Which was saved. On the Wayback Machine.

“It was altered,” said Wright.

It was altered? By whom? By Wired?

Wright had had enough. “Sorry, I’m going to court on this, it’s that simple," he said, steaming mad. And then the floodgates flew open:

“I don’t need to face trolls in rooms!" he roared. "That’s why we have evidence. Here's the thing, evidence! We have courts, [and] you know what happens when you lie in a court, you know the maximum penalty in this country for perjury? About 20 years! Great, I’m going to be in court, prove it in court! You get to send me to jail for 20 years, I get to put my evidence and other people get to put theirs. That’s how real things work in the real world.”

At this point, Wright rose, threw back his head and launched into a rant about Crypto Twitter.

“Outside of this crypto shit Twitter-school world where people sit there going, ‘Oh, Twitter matters,’ the real world people have evidence and rules, and people put documents out and get a chance to actually have them analyzed properly!” he said, loudly. “People in the real world, outside Twitter, Facebook and fake news get to actually say, ‘I'm sorry I didn’t create that [blog post], just because someone wrote my name on a PDF doesn’t mean it came from me!’”

(We had never mentioned a PDF. We had mentioned online archives.)

“I don’t know about you but I find that important,” he continued, still yelling. “I find this whole world, a thousand years of common law, important. I don’t think 'coder's law'”—it’s unclear what he was talking about here—“is good. I think it's shit! I think 'coder's law' is the lowest attack on modern society, the biggest social justice warrior attack, trying to rip down everything we have that is good. It's really about taking away everything we've built over hundreds of years and going, ‘Oh, it's just, white males.’”

“Augustus of Hippo was African,” he continued. “Sappho of Lesbos was female [...] That’s Western culture! It isn’t just a whole load of guys in white for the last fifty years like bloody Harvard's been teaching us. It's a whole lot of different colored people of different religions and different races and everything else and I’m not throwing Western culture away, I’m not throwing law away, I’m doing it in court where I will be held liable for my actions.”

We thanked Mr. Wright for answering our question.