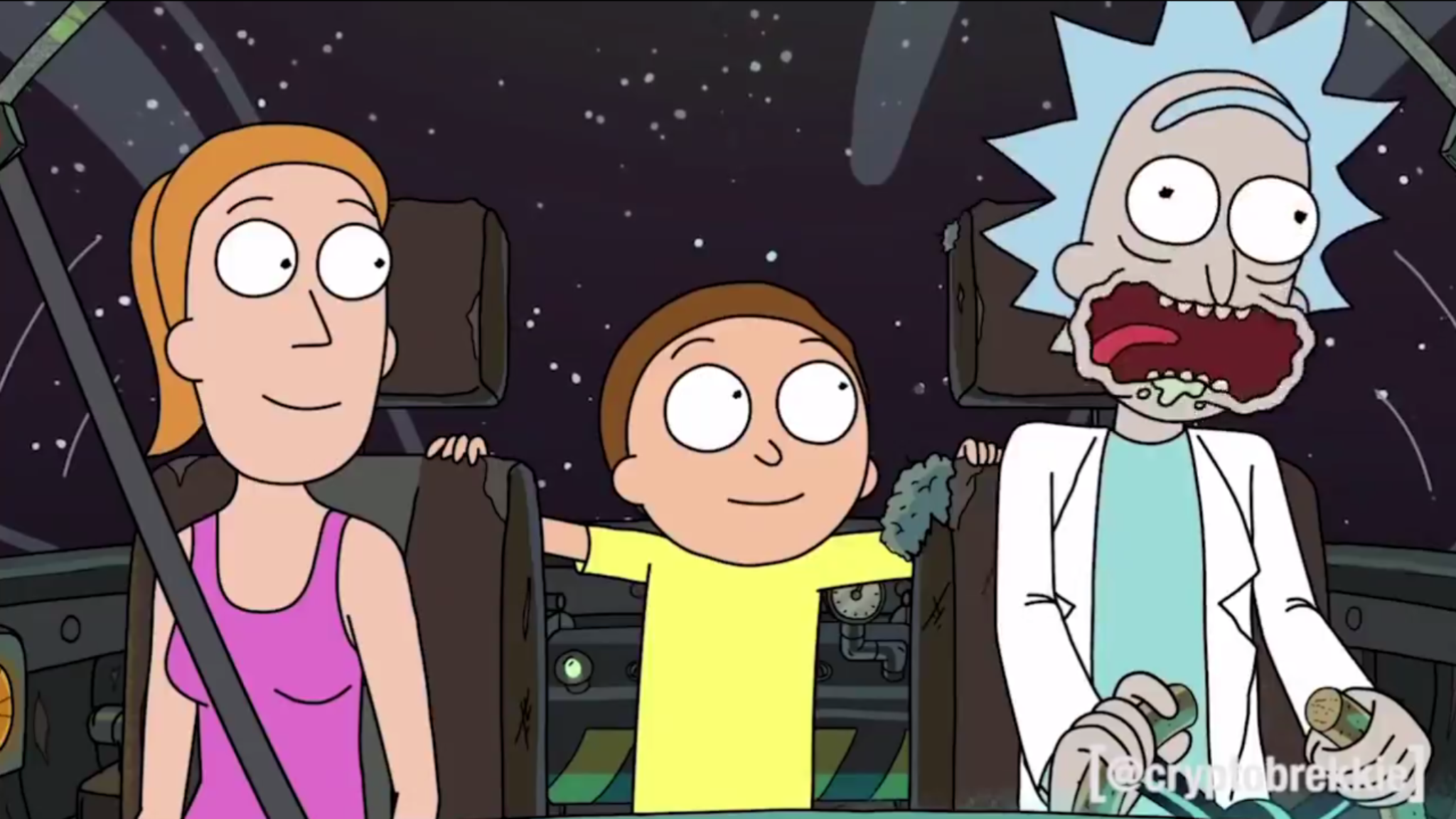 Blockchain and Morty risks the wrath of the XRP Army by poking fun at the most sensitive Ripple controversies.

The episode “Free the Ripple,” which takes aim at the cryptocurrency XRP, draws inspiration from the episode “Auto-Erotic Assimilation.” In that episode, scientist-cum-interstellar philanderer Rick arrives with his grandkids, Morty and Summer, on a planet whose population acts as a single entity, controlled telepathically by a vast, inscrutable being known as Unity; also Rick’s ex-girlfriend. While Rick spends time with his former lover—or the several thousand people and giraffes co-opted by her—Morty and Summer explore the planet.

In the Von Bitcoin version (watch the whole episode here), Unity is replaced by a Ripple shill named “Tiffany,” whose thousands of mind-controlled, blue-skinned subjects uncritically parrot her every opinion. (We wonder who that could be a reference to).

Join us as we dig out the most spine-tingling quotes—and reveal the lessons they tell. And away we go.

1. Rick argues that shitcoins are valuable

Rick, Morty and Summer stumble through an abandoned spaceship. Rick advises: “If you find a bunch of keys tied to random shitcoins, don’t pass those by, we can sell them all for Bitcoin.”

Altcoins have value—so long as you’re dumping them for the OG BTC.

Tiffany fills our heroes in on her latest hijinks: “After we broke up, I spent some time wandering through space. Then I found a world where I was better able to focus on my passion for XRP the Standard.”

The real Tiffany—last name Hayden—describes XRP as an investment that changed her life. True or no, Hayden’s influence appears to rob her followers of their very cognitive function. Like the blue aliens, the XRP army acts as if an extension of Hayden’s every thought and retweet.

The not-quite-clear-what-it-means phrase “XRP the Standard” is her—and subsequently her fans’—clarion call.

3. Tiffany (as an old lady) explains why alcohol is banned

An old lady version of Tiffany explains to Rick: “Recreational substances were banned here. They can open minds to ideas like Bitcoin and decentralization.”

XRP isn’t decentralized? Who knew? While Ripple CEO Brad Garlinghouse and CTO David Schwartz have steadily maintained that XRP is more decentralized than Bitcoin, the belief held among normal people is, “Er, no it’s clearly not.” (Although Bitcoin supporters might want to check twice before throwing stones, cough, China, cough.)

4. A stadium sings about Jamie Dimon

Is this unfair to Jamie Dimon? Photo Credit: Blockchain and Morty

Oh, the irony of the bankers’ coin getting flack from the original bankers’ coin. JP Morgan’s JPM coin—spearheaded by former Bitcoin-hater CEO Jamie Dimon—promises much of the same fluff that Ripple does, threatening XRP’s monopoly on the quite-possibly-worthless “cross-border-transactions-in-crypto market.”

5. The spell is lifted and two men reveal their true crypto love

The mind-control spell lifts and the afflicted reveal their true crypto favourites. One man, Ron Benson, says: “Yeah My name is Ron Benson, I’m a paid Ripple shill, I’m a father of two and as you can see from my flat, concentric nipple rings, I’m a member of this planet’s top race.”

Another, Michael Millwood, adds: “I’m Michael Millwood. I’m a Stellar dev and I’ll be damned if that Ripple nipple bitch’s race is superior. The rocket nipple people will rule this world.”

Fisticuffs quickly break out between Benson, the XRP fan, and Millwood, the pusher of Stellar. Stellar, of course, is the rival cryptocurrency that sprang from the mind of ex-Ripple executive Jed McCaleb. Rendered in technicolor, the inter-currency war takes on Shakespearean dimensions. And there’s a secondary treat: The masterful super-imposition of “Rocket nipple rings” onto the original footage.

Meanwhile, the “paid Ripple shill” taunt is bound to sting. Ripplers like to invoke notions like “truth,” “combating fake news,” and “honor” when defending their favorite private company—just like I invoked Sony’s “bolder work ethic” and “more effective resource management quotas” when defending my expensive Playstation Three’s integrity as a seven-year-old.

6. Tiffany (as a police officer) pilots a “hovercopter”

A drunk Tiffany-infected police officer rescues an endangered Morty and Summer using a “hovercopter:” “I probably shouldn’t be piloting a hovercopter, nor should I be running 200,000 Ripple nodes and 12 million custodial wallets.”

Again the charge that Ripple is centralized. (Custodial wallets are held by third parties and many XRP nodes are run by startups friendly to the mother-company.)

This time, however, Ripple is also drunk, which begs the question—what if Ripple co-founder Chris Larsen goes out on the town and, in a moment of drunken abandon, orders, say, six hundred million Strawberry Daiquiris with his undisclosed XRP stash? Can he do that? If he can do it, it’s…not a big deal, to be honest. He can always reverse the transactions.

7: Tiffany says the citizens are now happier as XRP shills

Is being an XRP shill really that bad? Photo Credit: Blockchain and Morty

Tiffany on the dark past of a now-carefree, assimilated woman: “This woman was a drug addict on the verge of suicide. Now she’s a blockchain consultant.”

8: Rick makes a plan to celebrate his reunion with Tiffany

Rick concocts a plan for his and Tiffany’s reunion: ‘We need a hang-glider, and a crotchless Roubini costume, and I want the entire field of your largest stadium covered end-to-end in naked redheads, and I want the stands packed with every man that remotely resembles Jamie Dimon.”

When the “institutional investors” and business heavyweights dismiss you, fantasising over sexual intercourse with them is the next best thing.

And that’s all the quotes worth mentioning from this delightful piece of American TV. Thanks for reading, Ripple fans and normal people, and be sure to brigade us on Twitter—but only, of course, if Tiffany tells you to.