HashCraft: Ubisoft’s blockchain experiment is the future of gaming

One of the world’s most successful game companies has spent the last year experimenting with blockchain and the future of gaming. Time to pay attention. 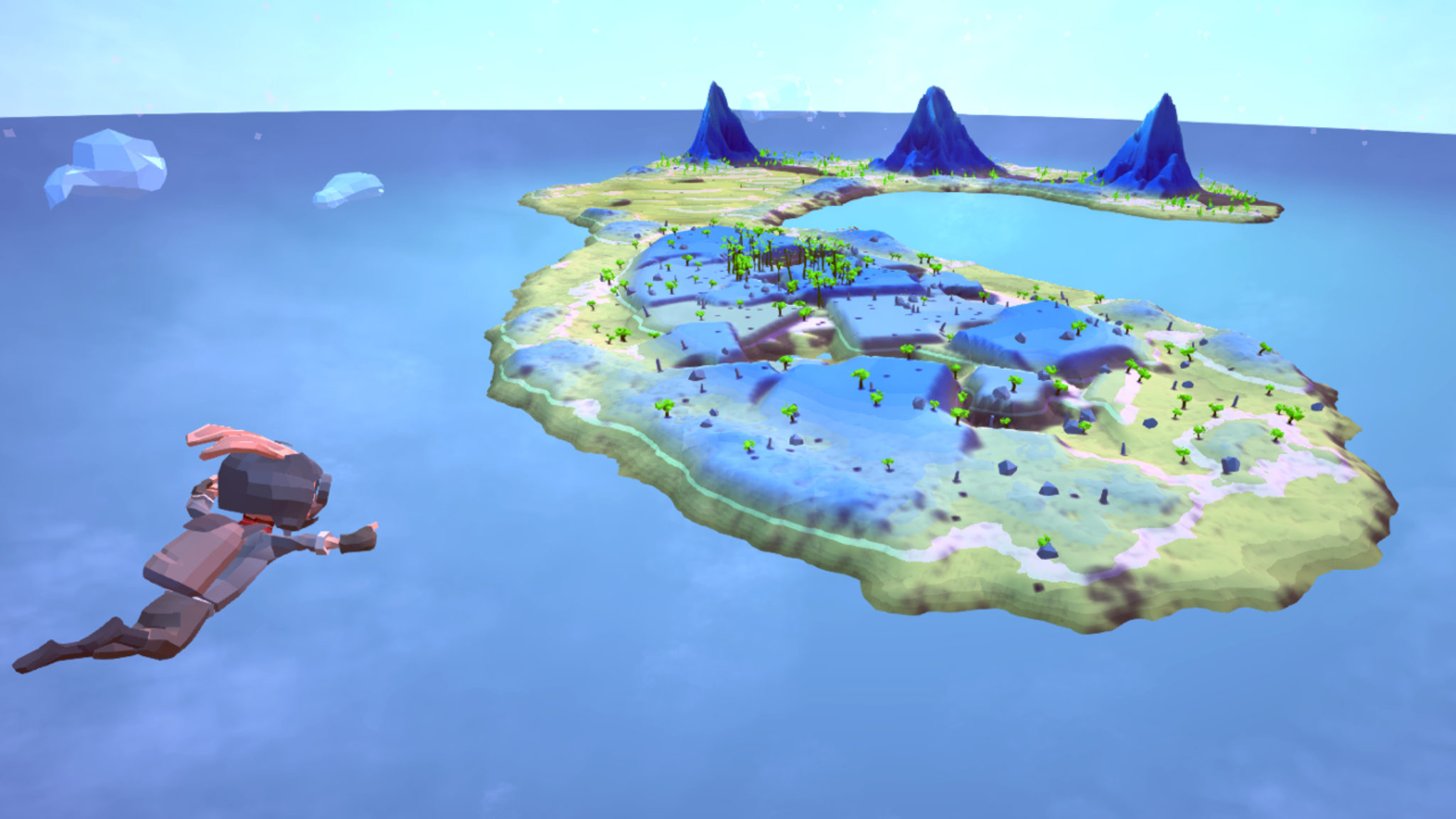 Imagine a game in which you parachute down to a unique island that your own computer generates. Against a landscape painted in vibrant colors, you run across fields of polygon flowers and shape the terrain, crafting challenges for the island’s future visitors. Take as long or as little as you’d like, and when you’re done, press “publish” and save your creation to the blockchain. It’s yours. You own it—in every meaningful sense of the word.

That’s the vision behind Ubisoft’s blockchain-based HashCraft, a project of the French gaming giant’s Strategic Innovation Lab. The Minecraft-inspired treasure hunting and island exploration game runs on the shared computational power of its players. There is no central server. No company in control. Players are free to collaborate or compete with each other on a decentralized, “always-up,” unstoppable network, creating communities big and small and deciding for themselves the rules—even physics—of their world.

It’s unlike anything the gaming industry has ever experienced. But, for better or worse, it’s an experience that Ubisoft isn’t yet prepared to release into the wild.

HashCraft is a prototype—an experiment in what the future of gaming could be. The game is the brainchild of a small but skillful team led by Ubisoft's Blockchain Initiative Manager Nicolas Pouard and Senior R&D Programmer Robert Falce, whose mission is to envision where the industry is going, not where it is.

Ubisoft wants its games to be future proof (of work)

“The Strategic Innovation Lab’s mission is to help Ubisoft’s teams to anticipate the future and be prepared for it,” says Pouard, a founding member of the recently formed Blockchain Game Alliance. “We explore technical, social and business trends which can influence gaming and entertainment at large, five or 10 years from now.” Pouard says Ubisoft has been working for years with external experts, including neuroscientists and data scientists, long before other gaming companies began doing the same.

The Lab leads Ubisoft’s work in cutting-edge research in a variety of intermingling areas, such as augmented reality, machine learning, and blockchain, “exploring all potential impacts, not only from a technical or gameplay point of view, but also in the business and legal fields,” Pouard explains.

The Strategic Innovation Lab spent the better part of last year building the HashCraft prototype and demonstrating its potential both within Ubisoft and at trade shows and conferences. Pouard says he’s been shocked by the game’s reception—crowds of gamers (and eager journalists) demanding to know when will the game be released. And as good as the Lab might be at predicting future trends, this was not something they anticipated, says Pouard.

While HashCraft itself might never be released to consumers, Ubisoft’s blockchain experiment has already pushed the boundaries of what was previously thought possible in gaming. And most people within the company are just as excited by what it means for the future of gaming.

Learn to code: The road to HashCraft

For Pouard, the experience in building HashCraft has been nothing short of transformational. The man leading the blockchain efforts of one of the biggest gaming companies in the word has no formal technical background. Before joining Ubisoft, he spent 10 years as a philosophy teacher, working mostly with teenagers and young college students. The “geek teacher” who spent his off hours playing video games and pen and paper RPGs, when he wasn’t questioning existence and wondering just where the hell this is all going.

“When I was offered to join Ubisoft and its Strategic Innovation Lab, I saw the opportunity to put my abilities at the service of one of the leaders and most forward-thinking companies in video games and entertainment,” says the former philosopher. “I thought this was the perfect playground to reflect on the future of an industry at the crossroads of innovation and creativity, and how it will impact society, even beyond gaming.”

When Pouard joined Ubisoft, he began with mapping the company’s “world consistency”—the idea that things, places, characters within a gaming universe should have meaning, a reason for being. Just the thing for a man with Pouard’s mind. At the same time, he was asked to help monitor and analyze changes happening with various technologies, business practices, and society at large—which led him to “get more and more interested in blockchain,” he says. And once he understood the “social and economic promise” of distributed ledger technology, he was quickly hooked.

Pouard essentially taught himself everything he needed to know about blockchain, not unlike the coders on his team. The real “magician” behind HashCraft, he says, was Robert Falce, the team’s lead game developer, who—before HashCraft—had no prior experience with blockchain. Falce is the former technical director of Braincandy Studios and also worked as a developer for Mob in Life and spent several years in visual effects and developing proprietary rotoscoping software before joining Ubisoft.

Both Pouard and Falce say they had zero interest in using blockchain to create a game unless the technology could be used to genuinely create something no one else had ever done—something no other gaming company had ever even attempted—let alone a AAA publisher like Ubisoft.

For Pouard, this was a chance to demonstrate how blockchain could be used to “redefine governance models” and completely upend the traditional dynamics between developers and players by reshaping the gaming ecosystem. For Falce, it became a challenge to push blockchain to its technological limits.

Crafting HashCraft: Taking blockchain gaming to the next level

Learning the ins and outs of blockchain wasn’t easy, says Falce. There was a lot of “painful trial and error.” But finding a way to integrate blockchain in a novel and useful way was even harder.

Crypto collectibles, non-fungible tokens (NFTs), or even creating a new cryptocurrency were all off the table. Even if not widely used in the gaming industry, they’ve all been done and were not interesting, Falce says. But the moment the team figured out what blockchain could actually do within gameplay, they immediately became very “enthusiastic and ambitious.”

“We forced ourselves to not use any database or network system beyond what the blockchain we used could offer by itself,” he says. “We thought it was the only way for us to really investigate the technology to the fullest, although this would necessarily restrict what could be done.”

HashCraft would ultimately be built on a MultiChain private blockchain using a consensus mechanism similar to proof of work. Each player, harnessing the computational power of his or her own system, essentially acts as a miner on the network and creates and validates “work” which is embedded in a block, visually represented as an island. “The island then becomes accessible to all other players, without them having to do the computing all over again,” explains Pouard.

With HashCraft, Ubisoft is exploring a gaming experience unlike any other, beyond even what blockchain companies are producing. PHOTO CREDIT: Ubisoft

The mechanics of HashCraft allow for each game to act as a “node on the network,” which creates “an always-up network without needing to use a dedicated central server,” Pouard says. “Players directly contribute to expand the world by creating their own island, hiding their own treasures and setting their own challenges [for other] players,” he says. Each player’s unique, user-created island is then registered on the blockchain,” giving players unprecedented latitude in what comes next.

Since players can choose with whom they share their islands, the communities they build can be as big or small as they’d like—or, as Pouard explains, groups of players can even opt to “create their own blockchain networks” that host completely new universes, each with its own unique set of boundaries for what is possible within the game.

The vision, then, for games like HashCraft is for publishers like Ubisoft to function as the creators of the “fantasy”—the characters and overarching storylines of the game—and then simply get out of the way. Through blockchain, the “ecosystem” (the individual players and the communities they build) then create the “experiences” by taking true, literal ownership of these characters and fashioning new stories of their own choosing.

“It’s another paradigm of online gaming,” says Pouard. “For now, it’s really rough and basic—the online side is really limited—but it gives us a glimpse of a possible future.” A glimpse, indeed. But it begs the question: Just how close of a future is it?

With so much time and resources invested in not only building the HashCraft prototype—but then demonstrating it to audiences all over the world—there is a natural curiously surrounding Ubisoft’s near-term blockchain intentions.

Pouard says that while the HashCraft experiment is complete, the work of presenting it to teams throughout Ubsioft in the hopes of inspiring them to take its applications to market goes on. It’s too early to talk about “business models” with games like HashCraft, he says. Monetizing it could ultimately involve some type of cryptocurrency, but Pouard isn’t convinced such a strategy is sustainable over time. “On another hand,” he says, “NFTs could redefine in-game items purchases” and blockchain also offers “new possibilities for a digital supply chain by using smart contracts to manage revenue share on user-generated content.”

All of those revenue models, however, raise important questions, he says. “How do you manage the inflation of NFTs over time? Should they be perishable? How do you manage decentralized trading of those assets?” The long-term consequences of these decisions have yet to be tested, says Pouard. And Ubisoft is keeping a close eye on several of the startups that it’s Station F program has funded—like Azarus, EverdreamSoft, and B2Expand—which are exploring several of these questions.

And while the bear market has forced cut backs across the crypto industry, Pouard says the blockchain gaming market has been largely unaffected. The downturn, in fact, has probably had a net positive impact—bringing honest companies back down to earth, he says. “The return to reality can be rough, but it’s healthy for the whole ecosystem.” Some might worry about crypto’s uncertain future, but to Pouard, the future of gaming is clear as day:

Just like online multiplayer and mobile games reshaped the gaming industry, blockchain is poised to do the same.