Hudson Jameson puts a positive spin on Ethereum’s latest troubles. (Is there fairy dust in those chicken nuggets?) 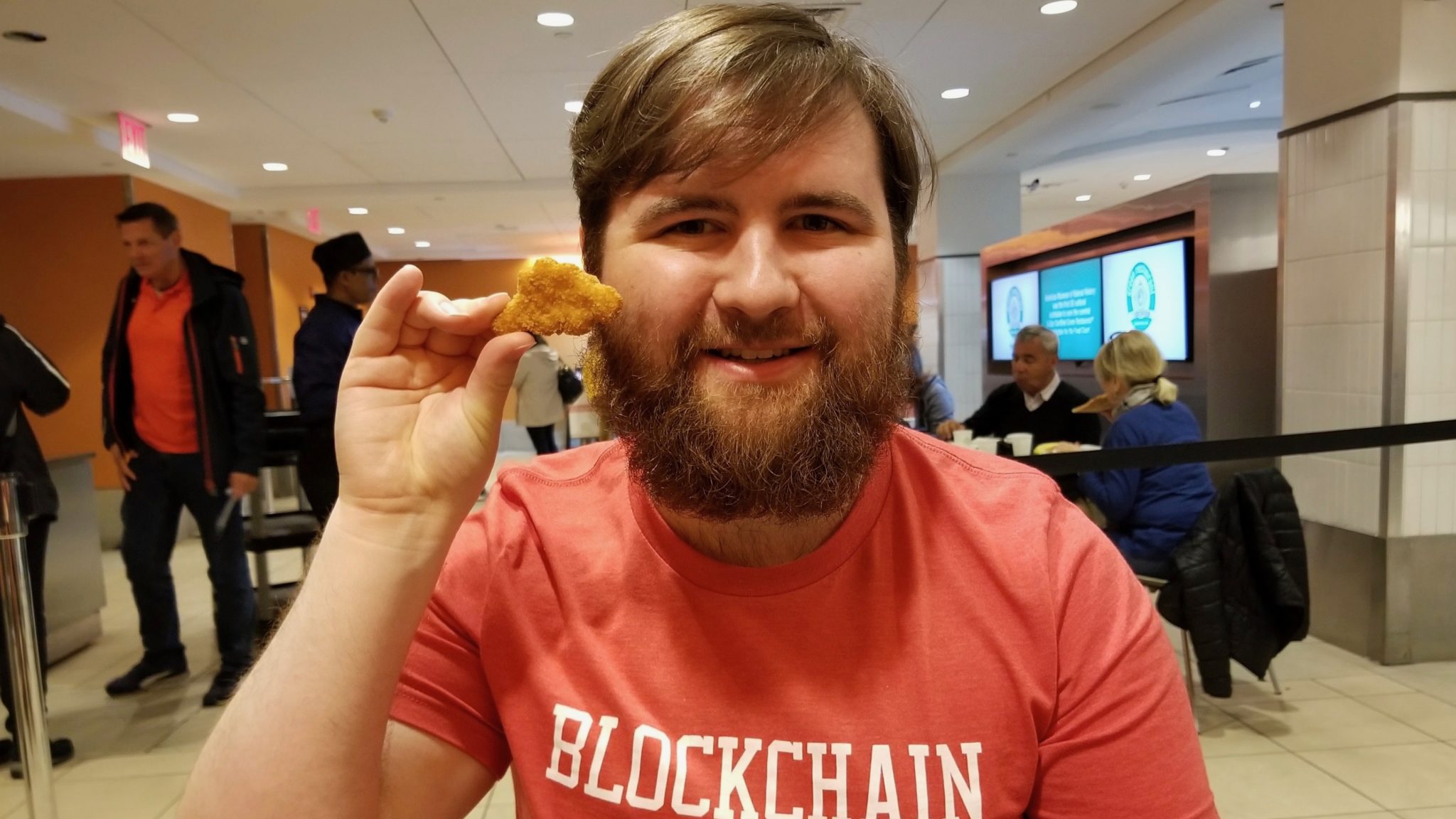 He doesn’t live with his mum, but Hudson Jameson is a passable version of that tendie-wielding, neckbearded, twenty-something chap who refuses to grow up—just like the meme that originated on 4Chan. But Jameson’s no deadbeat dude. He says he tries to be “pretty grounded and nice,” which must be pretty challenging for someone whose job is so key to keeping Ethereum on track.

“It’s been stressful but exciting,” he says.

Jameson’s job—people working on Ethereum eschew job titles in favor of job areas—can best be described as community relations for the Ethereum Foundation, the not-for-profit that administers the platform’s development. But despite his PR-ish-sounding title, Jameson, 27, functions more like Ethereum’s project manager. He’s also a knight who serves his king, Ethereum co-founder Vitalik Buterin—a crypto Sir Galahad, the faithful liege to King Arthur. Tendie is the knight (apologies for that).

Jameson (unofficially) chairs the bi-monthly core-developer meetings, where critical decisions about the ever-evolving network are made. That’s a pretty important role on a decentralized network, which by design has no leader. Moreover, as the defacto communicator-in-chief, Jameson’s take on Ethereum’s roadmap—what happened, what’s going on behind the scenes, and what it all means—helps to shape the public’s perception of the project.

It’s been an unenviable job during the past year. Like virtually every other cryptocurrency, Eth has been mauled by the bears, losing 90 percent since last January. But beyond that, the very name “Ethereum” brings to mind the  incredible rise—and gut-wrenching collapse—of ICOs, an era that has come to be viewed as a debacle. And the network itself has been an underperformer, thus far failing to live up to the cryptosphere’s lofty expectations. Last week’s the delay in the Constantinople upgrade is the most recent reminder.

Yet Jameson and his newly-formed group of Cat Herders soldier on, coordinating the platform’s many groups of developers, miners, and other stakeholders in their ongoing battle to reach consensus. Officially inaugurated on Monday, the Cat Herders are a small group (Jameson, Ethereum developer Lane Rettig and Afri Schoedon of Parity, among others) who help project manage platform hard forks and meetings, to speed up the upgrade preparation process.

The decision to abort the much-anticipated Constantinople hard fork last week, after a “potential vulnerability” was discovered in the code, is a case in point. Within hours, Jameson had organized an emergency meeting of over 50 core devs and other stakeholders. Then, with the impending hour already engraved into the blockchain, and just 36 hours to go, the Cat Herders sprung into action, disseminating new code to everyone who already updated, to ensure they didn’t follow the wrong fork.

To proceed with the upgrade, a piece of the original code had to be omitted. So, while a course of action has now been set, there’s still a question mark over future upgrades, which are linked to the defunct code and the introduction of cheaper gas costs (the way the network charges for transactions). The long-term fate of the proposal is still to be decided, and the wider implications are still emerging.

Nevertheless, Jameson is decidedly upbeat: “It’s just taking out a piece of the upgrade and re-evaluating it later, but it doesn’t delay anything else that we’ve been doing.”

Ensuring that devs reach consensus on a key decision can’t be easy but Jameson makes it sound as if it is. “We try to practice something called rough consensus,” he explains. We feel out the different sides of the argument, start to discuss it and it leans towards a certain side or direction.” After some debate (which can spill into dev forums, get a trifle heated and extend into weeks or even months), Jameson will ask if any of the devs at the meeting have any strong objections to the prevailing suggestion. “Usually people don’t and so we can go ahead with whatever decision it’s tending to.”

The process calls to mind the spontaneous order that occurs within physical, chemical and biological systems. Crystallization, the way crystals form, for example, takes place without any centralized control or direction. But it’s not something that has been attempted within a startup, at scale.

Organizing a community like Ethereum’s is not something everyone can do. But it wasn’t immediately apparent that this is where the young Jameson would shine: “I was incredibly anxious as a child and I didn’t really have friends until high school, so I would spend all my hours on the computer, dealing with online communities and online friends,” he says.

For someone who’s very much at the center of all the action, outspoken on social media and likes to wear pumpkin-patterned suits, Jameson comes across as sensitive and reserved, as well as community-minded and methodical.

In a decentralized, trustless community full of skeptics, trolls, and anarchists, Hudson is the root of trust," says Lane Rettig. "Seriously. Everyone knows Hudson, and everyone trusts him. It’s a tiny bit paradoxical, but that role is absolutely essential in our community, and no one but Hudson could do it."

Having stumbled across bitcoin in 2011, during his freshman year studying computer science at North Texas University, crypto quickly became a passion for Jameson, who was going through a “Libertarian phase. He started mining bitcoin and managed to sneak it into his studies, after recruiting a like-minded professor, the pungently named Dr. Ryan Garlick.

While he dabbled in Darkcoin (now Dash), he was captivated by Ethereum. And despite his bosses, at banking and insurance company USAA, agreeing to let him work on blockchain full time (and even lead a small team), in 2016 Jameson secured a job with Ethereum. The inaugural DevCon was his entry point. He impressed by hopping in to help the Foundation’s struggling volunteers.

Jameson did make a foray into the startup scene himself. In 2017 he co-founded Oaken Innovations, which combines blockchain with the internet of things. The startup showed promise, winning a couple of hackathons; notably putting a Tesla on blockchain, so it could automatically pay tolls. But he no longer has time and stepped away from Oaken to be on Ethereum full time.

Does he have some regrets that he’s not actually coding anymore, at Ethereum? “I’m OK with that, as I suck as a developer. I’m happy working for Ethereum and I think that’s where I’m needed in the ecosystem right now.” Those Ethereum devs ought to appreciate a little tendie-ness just now.