Curve's CRV token distribution: Everything you need to know

There’s one thing on yield farmers’ minds this week: The CRV token launch. Here's what you need to know.

Everything you need to know about the CRV token launch.

Curve, the third-largest DEX with nearly $2B in cumulative volume and the center of much of the yield farming frenzy, is gearing up to distribute its own CRV governance token this week—possibly as soon as today—and yield farmers just can’t wait.

“Let's talk after the launch.” Curve contributor Michael Egorov told The Defiant. “If I start answering everyone now, the launch gets delayed.”

After COMP, BAL and YFI prompted traders to pour hundreds of millions of dollars into lending protocols including Curve, while the tokens’ price skyrocketed, speculation is mounting that CRV will be the next hot DeFi token.

Curve leverages a unique AMM curve design (hence the name Curve) which mitigates slippage for trading pairs like USDC<>DAI and wBTC<>renBTC that are pegged to the same value. More on the project and its growth here.

Many projects have turned to Curve as a means of stabilizing their native tokens. One of the best examples of this is Synthetix and its sUSD and sBTC pools, which offer SNX, REN and BAL rewards on top of lending APYs.

The recent YFI rush, which began with traders providing liquidity to Curve’s Y pool in exchange for YFI, highlighted these incentives. As a result, total assets locked in Curve has increased by 1,600% in the past two months, bringing the DEX to $200M in TVL today and $450M at its peak.

In total, 151.5M CRV, or 5% of the total supply, will be claimable by LPs subject to a one year vesting period. Only 990 addresses earned more than 10,000 CRV with one whale taking the lion’s share with 21% of the earlyCRV rewards. 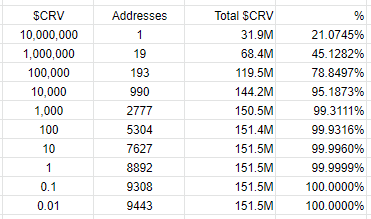 The pre-launch period will unlock in real-time, meaning that after the first 24 hours, early LPs will be able to claim 1/365th of their rewards. Here’s a look at how the initial 1.3B (representing 43% of the total supply) is set to break down:

The remaining 1.73B Curve is set to be distributed at a diminishing rate of 2¼ each year, meaning the entirety of the supply will not be issued for over 300 years. Upon launch, 2M CRV (or 0.067% of the total supply) will be distributed each day, until 62% has been distributed through liquidity mining. 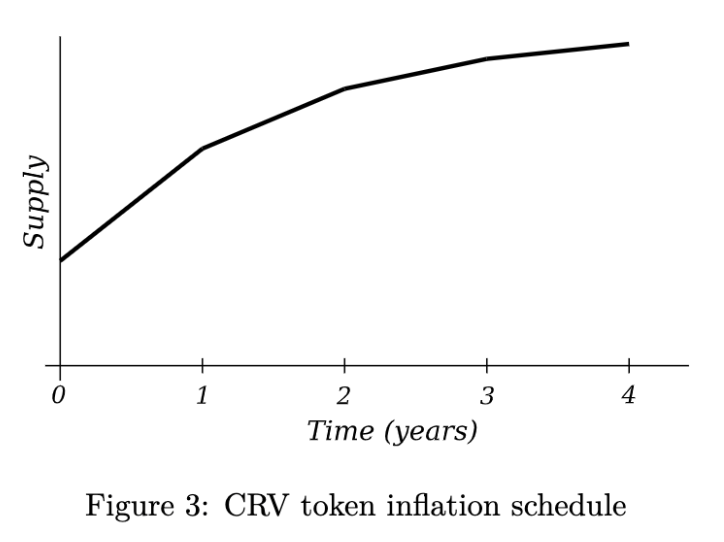 CRV tokens will be used to participate in the CurveDAO, a time-weighted voting system that grants early participants higher voting weight as the project evolves. It’s been suggested that all system fees will accrue to the DAO and be used to burn CRV at a later date. Liquidity providers are also likely to benefit from CRV rewards and a locking mechanism to favor long-term liquidity with added incentives.

As if yield farming wasn’t hot enough, the launch of CRV in tandem with a new YFI inflation schedule is set to drive DeFi TVL to new all-time highs.