Developers built more than 100 DeFi apps in past month

There was probably more innovation in DeFi this month than there was in traditional finance this decade. Here are six great projects.

Developers built more than 100 projects in ETHGlobal’s DeFi-focused hackathon in the past 30-days. From stablecoins, to automated investments, and fractional digital ownership, Ethereum builders pushed the envelope on what’s possible in open finance even further.

This is the first event of its kind for ETHGlobal, which has held over a dozen weekend-long, in-person hackathons for the past three years, but had never organized a month-long, virtual event, under a common theme. The goal is for developers to build an entirely new project within the span of the event, with the best projects winning prizes offered by sponsors. For HackMoney, there were $30k in prizes offered across leading projects like Compound, Uniswap and Aave.

We’ll touch on a few of submissions along with these projects’ wider implications on the DeFi landscape.

While Dai has taken the lead as DeFi’s defacto stablecoin, it should come as no surprise that it frequently varies from its peg. To this end, we’ve seen a number of solutions aiming to create the “perfect stablecoin” - i.e. one which is both stable and trustless with manageable collateralization ratios.

DeFiDollar - a basket-backed stablecoin project - aims to do just that. By leveraging Aave’s interest earning aTokens and Balancer’s liquidity tools, DeFiDollar accepts existing stablecoins like Dai and sUSD to mint new Dtokens. To mint tokens, users lock collateral via Aave. The interest earned on the tokens are directed to an earnings pool which is used to supplement and stabilize the peg in the event DUSD collateral falls below their $1 pegs. 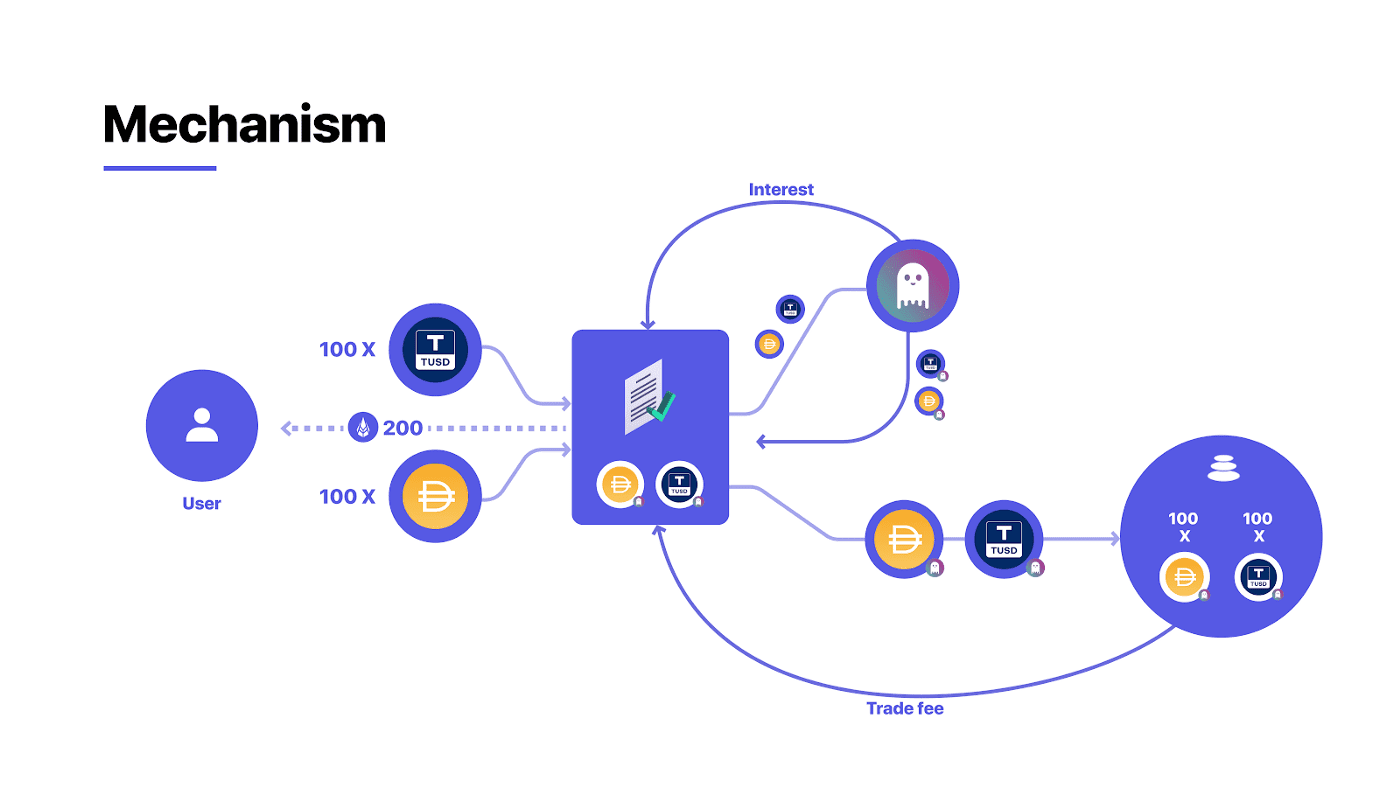 Zapper, a DeFi asset management dashboard that resulted from the merger of DeFiZap and DeFiSnap, unveiled Pool Pipes—a way for users to seamlessly transfer liquidity between various capital pools in the click of a button.

Pool Pipes are geared at solving liquidity fragmentation, ultimately creating channels to bridge capital between leading projects like Uniswap, Curve and Balancer. Best exemplified by Synthetix and their recent SNX incentive adjustments, Pool Pipes helps people migrate sETH Uniswap liquidity to sUSD Curve liquidity all in one transaction for a fraction of the cost.

Building off NFTs playing an ever-growing role in the Ethereum landscape comes a hack called What The Frac. As the name suggests, users can leverage the platform to create fractional claims on a given NFT—all of which are backed by DAI using a Balancer pool.

Auction creators commit to locking their NFTs in exchange for the right to create fractional shares. What The Frac allows creators to issue a fixed amount of “Fracs” which are claimable by those who contribute to the Balancer Pool. At the end of an auction, the winning bidder deposits Dai to the Balancer pool to unlock the NFT.

With the core premise of allowing users to redirect interest to open-source developers, YieldHero created a novel solution for users to swap to and from different Aave aTokens using an iEarn-like interface. By leveraging an Aave-specific Balancer pool, users can contribute and manage liquidity in a permissionless fashion, with top donors being signalled via a leaderboard for their Yield philanthropy.

While the idea of redirected interest is something we’ve seen before, the practice of using that interest to empower open-source development in a Gitcoin Grant-like fashion has some great implications. Plus, an easier tool to swap aTokens is a sure win for Aave!

As a privacy preserving tool for stealth payments on Ethereum, Umbra allows any two parties to transact with one another without revealing their identity to the wider Ethereum network. Built with a simple password-based login system, users can generate ENS names to receive payments from a sender to a newly deployed stealth address.

The receiver then withdraws the payment from the stealth address, leveraging the Gas Station Network to use part of that withdrawal as the funds to cover the transaction fee. This means someone can get started and withdraw payment without having any ETH in their wallet, and withdraw across dozens of newly created stealth addresses all from one common end-point.

Across all the HackMoney submissions, it seemed like Balancer pools were being used quite frequently for their ability to customize and compose different asset pools to meet specific liquidity needs. Redirecting interest was also a common theme, along with the general trend to capture arbitrage opportunities using flash loans and pool bridging.

Overall, it will be interesting to see if any new building blocks come out of HackMoney and it was pretty evident that giving teams 30 days to build resulted in far better products and submissions than what generally came out of the 48 hour sessions.

To learn more about HackMoney and the winning submissions, be sure to tune into the live stream which will showcase all submissions with a 3-minute Q&A session.