IOTA founder will pay hacking victims back with own money

IOTA founder David Sønstebø took to the company's Discord to tell users that he will pay back victims out of his own wallet.

IOTA is a distributed ledger technology connecting the Internet of Things (Image: Shutterstock)

IOTA founder David Sønstebø has agreed to reimburse victims of a hack that lead to the brief closure of the entire network out of his own pocket.

On the project's discord, he released a statement-subsequently shared on Reddit-that said "a significant portion of my own holdings will go towards resolving this unfortunate incident."

When Decrypt checked the Discord server to verify the claims, the statement had been deleted. However, we were able to confirm the statement was true. 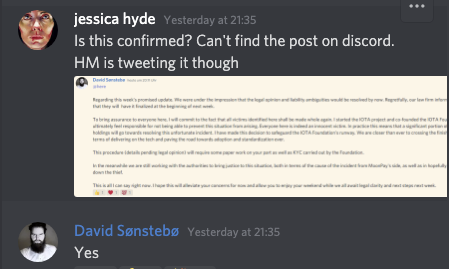 The incident in question was a coordinated cyberattack in February that lead to the loss of several million dollars worth of IOTA tokens.

The hack, which IOTA determined likely involved the theft of seed phrases, affected anyone who used the desktop version of IOTA’s crypto wallet, Trinity, from December 19, 2019 to February 17, 2020.

The subsequent fallout led to 17 days of downtime and a barrage of criticism aimed at the network's allegedly decentralized structure.

When asked for more details about the compensation scheme, Sønstebø wrote on the company's Discord, "I won't get into intricate details, but at the end of the day the fact is that IF (which I oversee) encouraged everyone to use Trinity after the infamous seedgenerator attack. We certainly weren't obligated to take on this responsibility, but we did. Full stop. All we wanted was for our followers and contributors to be as safe as possible."

We've written the statement out in full below.

"Regarding this week's promised update. We were under the impression that the legal opinion and liability ambiguities would be resolved by now. Regretfully, our law firm informed us today that they will have it finalized at the beginning of next week.

To bring assurance to everyone here, I will commit to the fact that all victims identified here shall be made whole again. I started the IOTA project and co-founded the IOTA Foundation and ultimately feel responsible for not being able to prevent this situation from arising. Everyone here is indeed an innocent victim. In practice this means that a significant portion of my own holdings will go towards resolving this unfortunate incident. I have made this decision to safeguard the IOTA Foundation's runway. We are closer than ever to crossing the finish line in terms of delivering on the tech and paving the road towards adoption and standardization ever.

This procedure (details pending legal opinion) will require some paper work on your part as well as KYC carried out by the Foundation.

In the meantime we are still working with the authorities to bring justice to this situation, both in terms of the cause of the incident from MoonPay's side, as well as in hopefully bringing down the thief.

This is all I can say right now. I hope this will alleviate your concerns for now and allow you to enjoy your weekend while we all await legal clarity and next steps next week."