How Ujo helps fans own a slice of their favorite musicians

Ethereum-based startup, Ujo is helping build a bridge between artists and fans that cuts out the middle man. 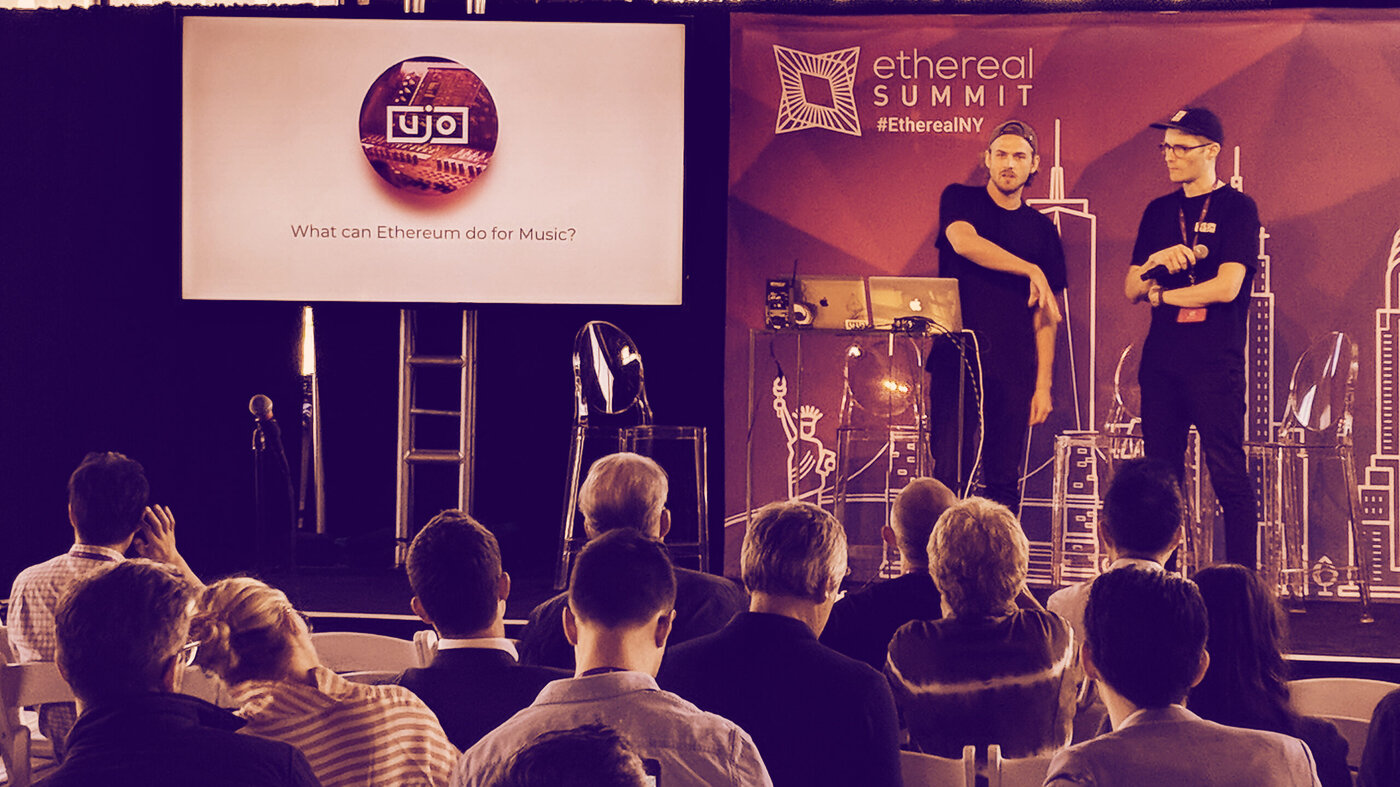 Are their posters hanging on your wall? Do you wear T-shirts emblazoned with their logo? Travel to see them in concert at festivals? Know everything about their history and musical progression?

Do the artists know what a diehard fan you are?

Probably not, but Ujo, an Ethereum-based project for adding music to the blockchain, thinks they should—and that you should get rewarded for your enthusiasm.

That’s just part of Ujo’s plan to tokenize and disrupt the music industry.

Ujo is one of the older projects under Brooklyn-based Ethereum venture studio ConsenSys (which funds Decrypt). The startup released its first prototype in 2015 with English singer-songwriter Imogen Heap. The prototype allowed for the decentralized licensing of music and payments, by cutting out middlemen and allowing fans to purchase her music directly using ether.

“It was one of the first times blockchain was used for anything else besides trading crypto, and that was pretty exciting,” Alexander Attar, the project lead at Ujo, told Decrypt. “We saw that music could provide a catalyst for blockchain technology.”

And to a certain extent, it was. According to Attar, the team at Ujo received feedback from other musicians who were interested in creating their own “thereum stores.” These were sites whereby royalty payments and music purchases could be sent directly to the artists.

“The music industry is pretty antiquated and one of the industries that hasn’t adapted very much to modern technology. You could see the downturn of the industry for a while with their inability to keep up with Napster. The industry wasn’t ready for that, and dismissed the Internet as a viable way to release music—until it slapped them in the face,” explained Attar.

The complex issue of music licensing

Music licensing has always been notoriously complex, with as many as 20 people with rights on a big pop track, explained Attar. Blockchain should make it easier to keep track of who has ownership, Attar told Decrypt.

Initially, the Ujo team thought the solution was a user-facing app. But it quickly became clear that the hurdles around using blockchain technology were too high for mainstream users. So the team shifted its focus to building an intellectual property protocol and metadata framework called Coala IP.

Coala IP is designed to manage ownership stakes for each piece of music and code via smart contracts to clean up the licensing mess, which was first hinted at after teamed up with Imogen Heap, which attracted the attention of Grammy-award winning musician RAC, who wanted to release a full-length album on the Ethereum blockchain.

We saw that music could provide a catalyst for blockchain technology.

By working with Ujo, fans could purchase the album with ether, meaning the payments would go instantly to RAC and his record label. As a bonus, everyone who bought the album got an “EGO,” an ERC-20 token, which Attar likened to buying a physical album or CD.

“While we were doing that project, we realized the potential for collectibles on the blockchain,” Attar said.

The token was a keepsake for fans as well as proof of ownership of the EGO album. It meant that although these users were pseudonymous, the artist had a direct link with them, able to send new music, offers and messages to those users based on which account had the token.

Ujo started envisioning all types of ways that could be used. For instance, if some fans had the tokens for every album an artist has released, the artist might want to engage with them for discounted concert tickets and exclusive swag.

Around that time, the ERC-721 standard for non-fungible tokens, or NFTs, was formalized. These tokens are unique, and non-divisible, like an individual piece of art–or a CryptoKitty. Ujo pivoted to implementing those kinds of tokens, instead of ERC-20s.

Today, any artist interested in releasing music on the Ujo platform can create specific ERC-721 tokens for their fans. These tokens are emblazoned with artwork, much like an album cover, and can be mementos that display a Ujo user’s musical interests on their profile.

Like most things on the bleeding edge of technology, Ujo is still trying to find its market. Thus far, 2,062 users have registered to buy music on the site. On the supply side, 662 musicians have registered 2,144 songs. There have been only 275 purchases for a total of $509.

Though that isn’t even a rounding error in the $43 billion legacy music industry, Attar is unphased.

“One of the biggest challenges we faced, and learned from along the way of creating the Ujo portal, was that adoption of consumer-facing applications that use blockchain technology is still super difficult due to the UX constraints and general lack of mainstream adoption at this time,” he said. “That being said, from the time we launched the portal up to now there has been tremendous development and new mechanisms that are closing that gap and easing the UX hurdles so I expect it only to get easier for traction as time goes on.”