“Don’t Blockchain Our Babies!” screamed a placard at a recent anti-lockdown rally in London. Here's why. 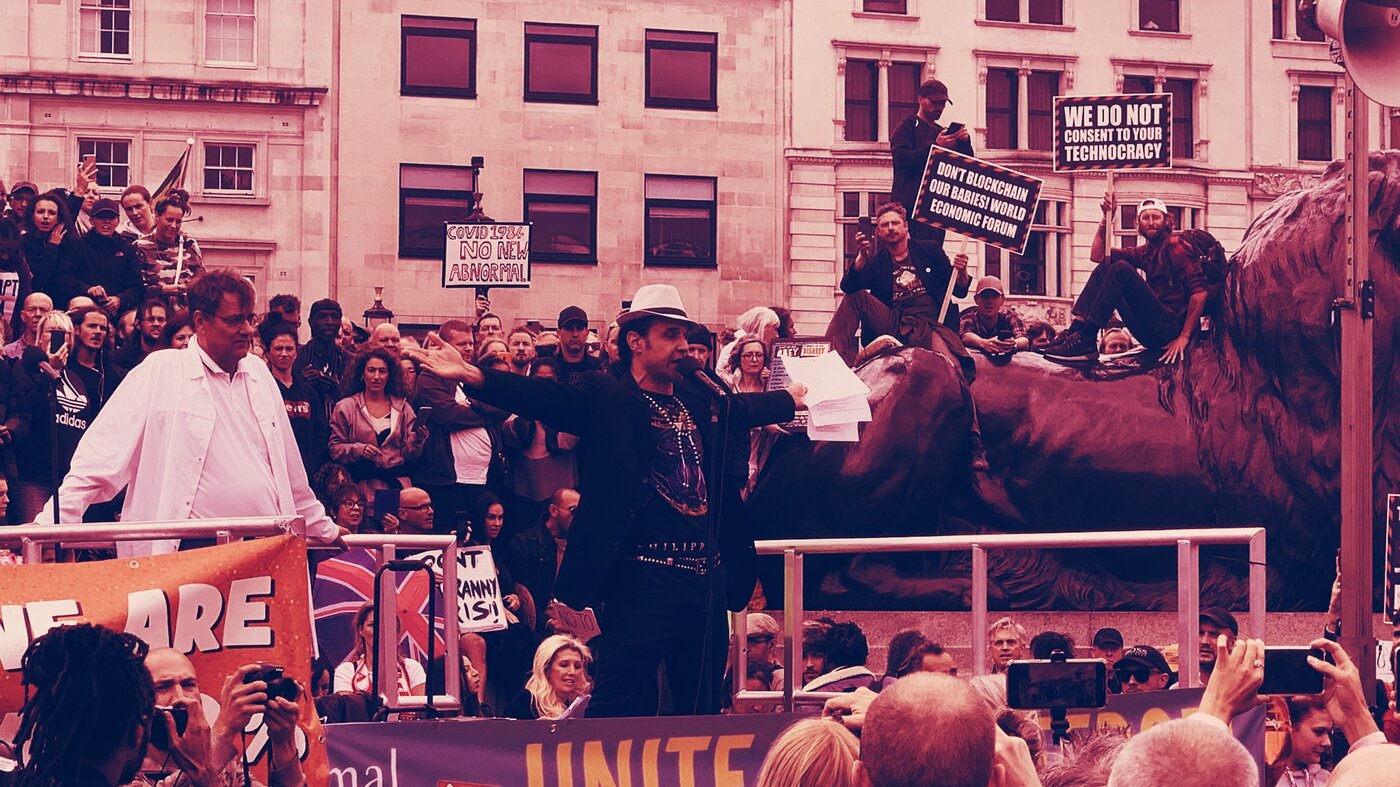 LONDON—Conspiracy theorists mingled with X-Factor stars and Barbie lookalikes, amid a sea of people who did not like being told what to do, at the climax of the anti-lockdown march in Trafalgar Square last Sunday.

Their sentiments, richly varied and strongly felt, were echoed across Europe. Similar marches took place in Berlin, Paris, Vienna, and Zurich last weekend, with tens of thousands of protestors turning out to express an assortment of gripes: disaffection with the handling of the coronavirus crisis, fears about compulsory vaccinations, anger about mandatory mask-wearing, and loopy ideas that the pandemic was a hoax propagated by 5G masts.

Now we can add blockchain phobia to that list.

Seems like the anti-5G-no-mask-anit-vax conspiracy crew have got it in for blockchain now https://t.co/1dpK2hqMio pic.twitter.com/epPodnH8ub

“Don’t Blockchain Our Babies! World Economic Forum,” screamed one placard, belonging to a nonchalant-looking protestor, sitting atop one of the stone lions guarding Nelson’s Column. “We do not consent to your technocracy,” proclaimed another. In the foreground, former X-Factor contestant Chico, addressed the crowd.

Were these QAnon supporters, as the press alleged? Was it a prank spin on the anti-vax movement? What could it mean? Decrypt set out to discover what in the world is going on with the tin-foil crowd and blockchain.

An open door to digital identity

British entrepreneur and multi-millionaire Simon Dolan was one of the march promoters and is the founder of liberty-loving organization Keep Britain Free (KBF), a loose collective of individuals with a wide range of grievances, including compulsory vaccinations, and the government’s handling of the coronavirus.

Protests happening today in central London, as well as in other cities across the world, opposing lockdown and masks - and promoting coronavirus conspiracy theories👇

That includes that Covid-19 is a hoax, Bill Gates will microchip everyone with vaccines and QAnon! pic.twitter.com/5uCoxnQHWS

A Donald Trump fan, Dolan recently made headlines when he called for a judicial review on the proportionality of the UK Government response to the coronavirus, and he’s no fan of the prospective government-backed, digital ID scheme either.

But blockchain isn’t in the frame there—or is it?

“What is most relevant from the blockchain perspective is that [the UK government is] trying to identify and remove legal obstacles to the use of identity technologies, and that would include blockchain-based identity technologies,” said Ian Brown, a security and privacy IT specialist. Brown was part of the UK Government’s Privacy Advisory Group which explored digital identity during the call for proposals for its digital identity service Verity.

He said that, while he’s not a blockchain enthusiast, the policy the government is pursuing will open the door to blockchain-based ID systems. The Times reported that these plans are part of Chief Adviser to the Prime Minister Dominic Cummings’s aims to “revolutionize the use of data across government.”

Cummings’ views on blockchain are unknown, but the highly unusual job advert on his personal blog urging “super-talented weirdos” to join Her Majesty’s civil service would be a great fit for swathes of the blockchain and crypto industry.

But what of the World Economic Forum’s role in all of this? Aren’t they supposed to be the ones blockchaining babies?

It turns out that there is indeed a World Economic Forum-affiliated project on blockchain-based identity solutions targeting young children.

The World Identity Network (WIN), a nonprofit advocating for blockchain-based universal identity, was launched in 2017 on Sir Richard Branson’s Necker Island. It’s reportedly working on the world’s first pilot that will use blockchain technology to help combat child trafficking.

On its face, one would think the project would thrill conspiracy theorists. The QAnon cult is waging a war against elite Satan-worshipping pedophiles. So you’d think that they’d approve of a blockchain-based plan to stop child sex trafficking.

You’d be wrong: The QAnon crowd hates Branson. They believe he is a child sex trafficker and was listed among the hundreds of celebs in Jeffrey Epstein’s “little black book.” Just as bad is the fact that Branson is pals with Bill Gates—the biggest bogeyman of all, according to the tin-foil hat crowd.

A favorite conspiracy theory is that Gates wants to use vaccination programs as a cover to put microchips into newborns, using RFID technology as a means of tracking and controlling them. Maybe the conspiracy theorists think blockchain will be added to the mix?

“Whether it’s the blockchain, Bill Gates or bots, it is simply an emblem of modernity that the QAnon crowd focus their anger on,” said David Birch, author of “The Currency Cold War: Cash and Cryptography, Hash Rates and Hegemony.”

A Branson-based blockchain aside, it’s still a bit weird that the “don’t blockchain our babies” protestors are opposed to a technology that is so well aligned with their own desires for privacy, liberty, and zero censorship.

Last week, news reports fingered Jim Watkins, owner of anarchist messaging board 8chan (now renamed 8kun), as the odds on favorite to be QAnon himself. And his son, Ron, loves him some blockchain—according to this fascinating Coindesk piece. (Watkins pere denies being QAnon.)

Watkins junior told Coindesk that he thinks blockchain could play a key role in a defensive infrastructure to prevent free-speech platforms like 8kun from being de-platformed. His experiments with it to date haven’t exactly panned out—yet.

But he’s not giving up. His latest, Project Odin, involves 8kun’s users running front-end nodes that support the website. Indeed, it’s due to launch very soon, he told Decrypt.

It is almost time to release <codename> Project Odin. pic.twitter.com/RaVsyOBm3K

So does it use blockchain?

“I can’t remember if Odin has blockchain implementations or not. It's been a few months since I looked at the code,” said Watkins.

Which is super confusing. But maybe that’s the intention.