Bitwala appeals to the Bundestag 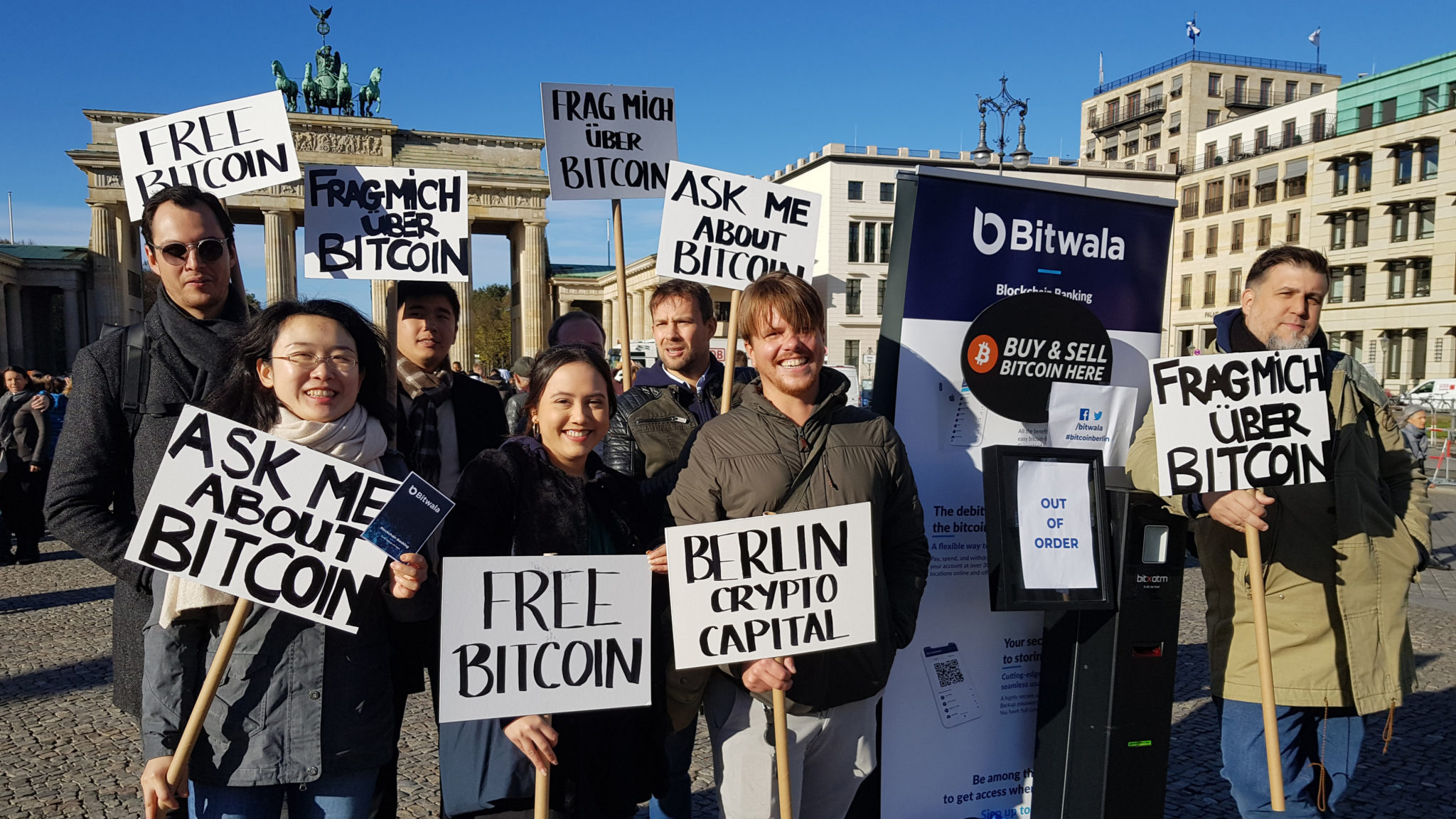 The Brandenburg Gate stands proudly in the very center of Berlin. It was built around 1790 to celebrate the successful restoration of order after a turbulent period in the country’s history. Since then, Germany has developed a reputation for orderliness, but there’s one area where things aren’t quite so straightforward.

A decision made by Germany’s court of appeal last month has caused confusion and uncertainty over the future of cryptocurrencies. Bitwala, a German blockchain banking service, is so worried about the possible repercussions that the startup mounted a protest in front of the Brandenburg Gate this week.

It's a story we're hearing more often in the space. This year we've seen protests in both Poland and Slovakia over the uncertainty and inconsistency around how regulatory authorities want to handle this space. In the US, the SEC has snared dozens of companies in its regulatory web of confusion. In Japan, they’ve all but given up on regulation, telling companies to do it themselves. It's now Germany's turn to feel ill at ease.

Germany has emerged as a strong contender to be Europe's crypto powerhouse. IOTA calls the country home, alongside more than 30 other blockchain companies. German big business is also involved, with the likes of Deutsche Bank, Commerzbanz, UBS, and pharmaceutical giant Merck all setting up shop in the space. The recent court case now makes the future of these projects unclear.

“[The] court ruling said the authorities in Germany are overstepping their mark and that bitcoin, in this country, is not regulated anymore,” said Bitwala’s President, Jörg von Minckwitz, who is spearheading the protest.

“It was regulated, as a unit of account—so treated as close to money—but this recent court ruling questioned this. And so, at the moment, we only have uncertainty, because the BaFin, our regulator, still says it is a unit of account. This is an uncertainty that no business can work with.” Jörg von Minckwitz, Bitwala

“It was regulated, as a unit of account—so treated as close to money—but this recent court ruling questioned this. And so, at the moment, we only have uncertainty, because the BaFin, our regulator, still says it is a unit of account. This is an uncertainty that no business can work with.”

To elaborate further on von Minckwitz’s account, the court ruling he refers to concerns Bitcoin-24, which, five years ago, was the largest bitcoin exchange in Europe and one of the first to open in the world. In 2013, it was shut down by the German financial regulator, the BaFin. Its owner, Simon Hausdorf--who was only 16 at the time--was convicted of illegally running an exchange.

So, at least until last month, there was some certainty that running an exchange was illegal and would land you with a fine, if not a jail term. Now, that’s no longer the case.

On September 25, a German court cleared Hausdorf on appeal. The appeal court stated that the BaFin (the Federal Financial Supervisory Authority), was wrong to consider bitcoin a financial instrument in this case, as this was not part of its "assigned area of responsibility.” However, despite the court’s slap on the wrist, the BaFin is sticking to its views.

The court’s decision has sparked a heated debate in the country’s banking and fintech communities and, according to von Minckwitz, demonstrates an urgent need for clarity in the matter. This, he says, can only be achieved through a cryptocurrency bill drafted by the country’s legislating body, the Bundestag.

Simon Hausdorf could now “even sue the BaFin for ruining his business,” says von Minckwitz.

As you would expect, the shutdown of Bitcoin-24, caused consternation among its users. Some are still pursuing funds that they claim were not returned.

But what most concerns von Minckwitz is the exodus of German crypto firms and talent to Malta, Switzerland and other European countries with a more tolerant attitude to cryptocurrencies. He believes that the September court ruling has further undermined the legal status of bitcoin and other cryptos within Germany.

“We really want our government to realize that it’s now time to act, because we’ve had the highest density of bitcoin or blockchain companies in the world here. Berlin’s now losing its title of crypto capital of the world because Zug [in Switzerland], for example, has better regulations. There’s tremendous interest in cryptocurrencies in Germany.”

Of course, Germany is not the only country to suffer from a lack of regulation. The U.S.A. is currently feeling the strain of crypto uncertainty. But the geographic proximity of countries such as Switzerland and Lichtenstein—where the stance towards cryptos is more favorable—makes the regulatory uncertainty in Germany that much harder for von Minckwitz and his ilk to stomach.

That hasn’t stopped the Bitwala team capitalizing on the protest to educate Berliners about cryptocurrencies. With the Brandenburg Gate cutting a formidable backdrop, and armed with a thousand millibitcoins (worth between $4-5 each), Bitwala was distributing the booty to anyone who was interested in learning about cryptocurrencies and blockchain.

The company’s bitcoin ATM stood idly nearby, an “out of order” sign displayed on its screen, which was meant to highlight the fact that no licensed crypto cash machines are currently operating in Germany. This is due, largely, to the difficulties in obtaining a license and uncertain regulatory climate, says von Minckwitz.

“We wanted to put a working ATM here,” he explains, pointing to the defunct machine standing next to him, “But our lawyers said ‘no, you can’t switch it on because [the regulatory climate’s] so uncertain.’”

In November, Bitwala is due to launch not only Germany’s, but the world’s first, fully regulated blockchain bank accounts, in partnership with Berlin’s solarisBank. It’s the culmination of two and a half years’ work for von Minckwitz and his team.

The service aims to connect conventional bank accounts with cryptocurrency accounts, thus bridging the worlds of blockchain and traditional banking. There’s also an element of reassurance as deposits will fall under the German deposit protection scheme, says von Minckwitz, with up to €100,000, held in current accounts, guaranteed protection.

According to Bitwala, almost 40,000 people have signed up for the hybrid accounts, two-thirds of them in Germany.

Bitwala began in 2015 as a blockchain-based hub for money transfers. In September, it picked €4 million in funding, which is being used to open up the new cryptobank in November.

Further expansion is also in the works, with France and the Netherlands likely to be the next countries where Bitwala applies for licenses. “By the end of 2019 we want to be active in all European countries,” says von Minckwitz.

Bitwala is not reliant on the regulatory tide turning in its favor to achieve its objectives, its banking partnership gives it access to the requisite licenses. But for other crypto startups the uncertain situation in Germany and a number of other countries is causing a massive headache.

With recent decisions to regulate the industry coming from Japan and the United Arab Emirates, and favorable progress  in Taiwan and South Korea, there are indications that things are slowly beginning to change. Even in Germany, von Minckwitz notes that cryptocurrencies were mentioned by the ruling political parties six times in a key policy agreement, compared to five mentions for child poverty.

But for those such as Hausdorf, who have been caught up in the regulatory crossfire and have spent the past few years living with the repercussions of decisions that are now being questioned, that must be some small consolation.