DeFi's so-called yield farmers are putting their capital to work to earn yield from protocols such as Compound, Synthetix, Balancer, and Curve. Here are their tips.

DeFi has been overtaken by yield farmers putting their capital to work.

Yield farmers are earning as much as 100% APR on popular stablecoins on a good day in the field. On a bad day, losses can be steep, but the potential for big profits has drawn hundreds of millions into DeFi in the past week. 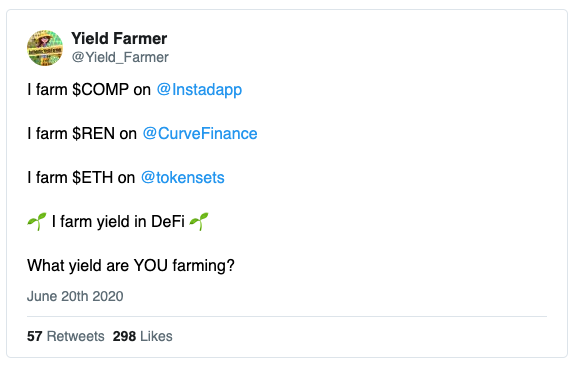 While depositing capital into a smart contract to earn a return is nothing new to DeFi, yield farming has become more attractive in the recent weeks as protocol teams are increasingly incentivizing liquidity providers (LPs) by distributing their native token. That means traders can get the hottest tokens on the block in addition to interest on their deposits.

We asked top yield farmers about their strategies and key takeaways new traders should keep in mind when heading out to the fields.

But first, let’s briefly get into how this all began. Before there was yield farming, there was Synthetix. As one of the OG yield farming strategies, users could (and still can) participate in one of Synthetix’s dozens of incentives to earn a return on capital supplied to various liquidity pools.

One of the first strategies was designed to increase liquidity for Synthetix’s synthetic ETH token, or sETH, on the Uniswap DEX. Traders who added liquidity to the sETH/ETH trading pool and then staked their Uniswap sETH LP tokens —these are tokens that represent deposits on Uniswap— on the Synthetix platform, receive Synthetix’s native token SNX, plus trading fees collected from Uniswap.

The strategy was mimicked for many other tokens across different DEXs. The incentive to encourage liquidity for sUSD, Synthetix’s dollar-pegged stablecoin, on the Curve DEX, currently offers the highest weekly SNX rewards at 48,000 SNX (~$70k).

When Compound started distributing its governance token last Monday, all bets were off.

Traders now had the ability to earn a slice of the 2,880 COMP tokens distributed daily (out of 4.23M total COMP, or 43% of total supply, reserved for the protocol’s users) to those supplying and borrowing capital from the protocol. Close to $1B in new assets flooded into the lending protocol from those wanting to take advantage of the incentive.

“I’m still surprised by the rate of growth in assets supplied,” said Matteo Leibowitz, an analyst at The Block. “To me, that suggests more professional participation, and is certainly a change from retail-dominated dynamic we've seen over the course of Open Finance's brief history.” 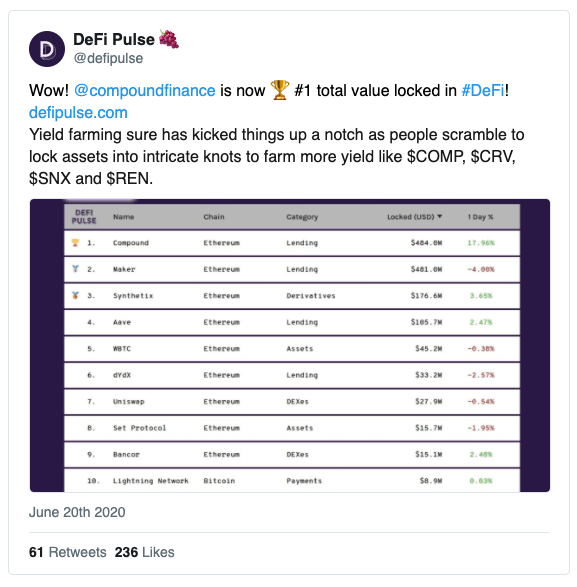 Some farmers began supercharging their earnings by taking out leveraged loans to borrow the tokens which yield the most COMP (Compound’s token is distributed relative to the amount of interest accrued by each market), and platforms like InstaDapp made this possible in one click.

This strategy quickly caught the attention of many thanks to over 100% APR when including the profits to be earned from selling COMP, as it soared from less than $20 when it was listed, to over $300 in days.

Now, we’re seeing crop rotation take form as LPs are shifting from USDT into more scarce assets like BAT, WBTC and ZRX. Over the weekend, the amount of capital being supplied and borrowed on BAT markets surged by over 20,000% as farmers raced to get a leg up on the daily distribution of 2,880 COMP.

Here’s what some of the most active DeFi investors are doing to farm yield.

DeFi investor who goes by the online name of Degen Spartan:

The strategy to “take stablecoins, throw into sUSD Curve pool, take the LP token, and deposit into the Synthetix Mintr incentives contract,” has yielded him “rather consistent 20%+ APY in SNX” since he started farming DeFi yields in early 2019.

He says the flock to COMP “has left a void in the smaller and more niche strategies, increasing the yield in the space overall.”

“I'm seeing opportunities that range from a few points of APY to over 100% or even several hundred percent APY, depending on what assets you hold and what risks you're willing to take. Most of the returns come from exuberance or inefficiency of these early protocols,” he said.

“A lot of the lending facilities are currently offering capital at very low rates (sometimes 0%) relative to the APYs one could be earning.”

DeFi investor who goes by the online name of SNX Professor:

He uses “collateral'' to borrow USDT and lend back USDT. Then BAT became the one that gives more COMP so he closed the positions and switched over to borrow BAT and lend out BAT again.” The Professor recommends to “monitor daily, switch only if it makes sense -> yield farming takes time since you have sunk costs like gas fees/slippage fees etc.”

“Contributing liquidity to Curve is simple but exciting since it pretty much is the same as our main strategy of getting exposure to the tokens of protocols in the early stages and at lower valuations, giving more potential upside than something that is already valued at a hundred million-plus,” he said.

To anyone who’s been yield farming, gas costs are something you simply can’t ignore. While smart contract covers on Nexus Mutual are a good starting point, those using leverage should be wary of ways they can get squeezed out - especially when farming with a volatile asset like BAT. Lastly, the potential for irreversible vulnerabilities - like the $2M worth of ETH stuck in bZx - is something very few saw coming.

“I would be surprised if yield farming will yield more than 20% APY over extended periods of time.” warned Clausen.

Jesse Walden, founder of venture fund Variant and former a16z investor, said that while yield farming can incentivize use in the short term, a successful protocol still depends on builders and users staying in the platforms in the long term.

“Yield hacking in DeFi is a short-term incentive to drive user growth, but the bigger game is the long-term wealth creation that comes from building (and owning!) a piece of the products and services that billions of people will use every day.”

—By Cooper Turley, with reporting assistance from Sebastian Aldasoro